Escargots and other fine specialties

Okay, now the truck drivers in France have decided to get their piece of the action. They are planning to start traffic slow-downs on the autoroutes —what they call « opérations-escargot » — to make clear their displeasure with the governments retirement pension reforms.

On the France 2 news, journalists are pointing out that there isn't much point in slowing down traffic, because in so many regions motorists can't find fuel for their vehicles anyway. The way they will slow it down is to have as many big trucks as there are lanes on the highway driving slowly, side by side, so that nobody can pass them. It's effective.

Yesterday, before our Sunday dinner, I had to make an unexpected trip to Amboise. On the way, I noticed that some service stations were closed but others were open — and I mean stations that would normally be open for business on a Sunday morning.

I had gotten up early to continue my dinner preparations, which had started the evening before. Vegetables were peeled, shallots were sliced already, but the guinea hen needed to be cut into serving pieces. That's what the recipe called for. There were a million things to do around the house, I thought. Many didn't get done, and it didn't matter. 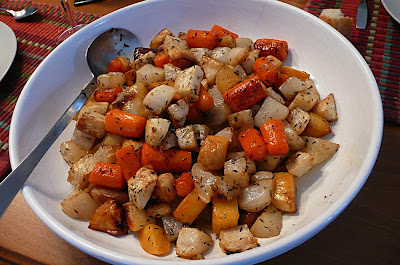 Roasted winter vegetables — turnips, carrots,
rutabagas, shallots, onions, and celery root
If you want the recipe for the main course, here's a link. It's on David Lebovitz's blog, called Living the Sweet Life in Paris. We followed it faithfully, except that we bought a guinea fowl — une pintade — instead of a chicken. That's a little more exotic, and one of the poultry vendors at the Montrichard Friday market (also at the Saint-Aignan Saturday market) sells very nice ones at a very good price (5.20 €/kg).

I also substituted fresh sage for the parsley in DL's recipe, which he says he adapted from a recipe in Susan Herrmann Loomis's French Farmhouse Cookbook. I like sage with poultry or pork.

I had finished cutting the pintade into pieces — two wings, two drumsticks, two thighs, and four breast pieces, plus two pieces of the neck, which was 6 or 8 inches long — and put it in the refrigerator, when the telephone rang. It was a friend who lives in a village 7 or 8 miles south of us. "Do you have petrol in your car?" she asked. I said I did.

"I'm sorry to call you so early on a Sunday morning," she said. It was 9:00. "I really need someone to drive me to the emergency room. I've injured my eye, it's very painful, and I don't think my driving myself to the hospital would be a good idea." I told her I'd be at her house in about half an hour.

I got there and we drove up to Amboise, which is only about 20 miles from Saint-Aignan. We finally found the emergency room — spotty signage — our friend got the treatment she needed, and I was back at home by about 11:45. Walt was working on the dinner preparations all that time.

The long and the short of it is that our friends from Paris were able to make the three-hour drive down from Paris yesterday morning, despite the fuel situation, and they actually arrived early, at 1:00. We didn't expect them much before 2:00. They helped us finish up the work in the kitchen

Then our other friends arrived, with their dog. Gracie the dog was excited to see Callie and all the people. As soon as she came in, she brushed by the coffee table and toppled a glass of sparkling wine with a swipe of her tail. It was white wine so no great damage was done, and our friends from Paris noted that the coffee table was especially shiny and brilliant after we wiped it down with the bubbly! There's a good house-cleaning tip for you. 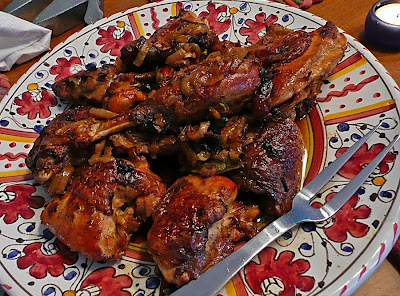 Roasted guinea hen with caramelized shallots
It's hard to take pictures of food when you are serving it and socializing with guests. I took only two — at the table, without the tripod, so they aren't the best pictures I've ever taken. Our roasted pintade with caramelized shallots was delicious, but it looked nothing like David Lebovits's. It was a mahogany brown. I don't know if that was because it cooked longer than DL's or because it was guinea hen and not chicken.

Whatever, it was delicious. One guest said that she always thought of pintade meat as being drier than chicken meat, but this pintade was not dried out at all. It was moist and flavorful. The vinegar and soy sauce it cooked in had a lot to do with that. The roasted winter vegetables, cooked in olive oil with thyme, salt, and pepper, were good with the bird. Walt's pumpkin raviolis with a buttery sage-walnut sauce were the hit of the day. I think he'll post about those on his blog.
Posted by Ken Broadhurst at 07:03