Busy before the holidays

This has been our busiest week in a long time. We both had doctor's appointments for our regular six-month checkups. We also had to go into Saint-Aignan to talk with the representative of the French health insurance administration to straighten out our status. That turned into a trip to Blois on Wednesday, and a trip to Montrichard on Friday.

The appointment in Blois went well, and going up there was a good excuse to try a new restaurant. We had lunch at the Brasserie Hippolyte, a little place that is all decked out in old French advertising posters and red-checkered tablecloths. And the food was good — pâté to start and then roast lamb with noodles, carrots, and diced fresh tomato. The wine was from Chinon and came in a half-liter pitcher — delicious.

At the health insurance office, we spent an hour explaining our situation to a friendly young woman who straightened out our papers and re-did our whole file. We had signed up separately two years, but the health service requires us to sign up together, because we live at the same address. Who knew? So we had to re-enroll and provide a lot of papers about our income over the past two years. A bonus: the agent told us she would try to get our coverage increased from 70% to 100% as part of the new account created for us. That would be good. 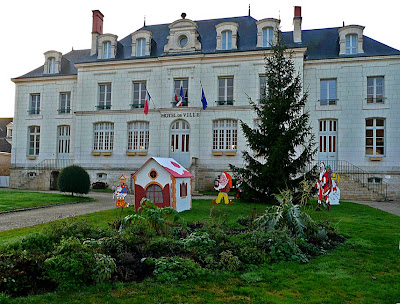 Christmas decorations in front of the Saint-Aignan town hall
Meanwhile, it was time to start doing our holiday food shopping. I bought a capon for Christmas day, and we'll stuff it with cornbread-sausage dressing — "dressing" is a Southern word for "stuffing" and it sounds a little more appetizing, doesn't it? Yesterday we bought a little jar of duck foie gras, a slice of pâté aux figues, and some Cantal, Comté, and Gruyère cheese for a fondue.

Today is Walt's birthday — Bon Anniversaire ! —and we'll have his traditional birthday dinner later today — steak au poivre. The first time we ever had steak in a cream & black pepper sauce together on his birthday was 1982, and I don't think we've missed a birthday since. Here's the story.

Yesterday we bought a slice of what is called rumsteack at the butcher counter in the Coccinelle supermarket in Saint-Aignan. I'm not sure what that would be in American terms, even though the word comes from the English "rump steak." That doesn't mean much, but we know it is good. 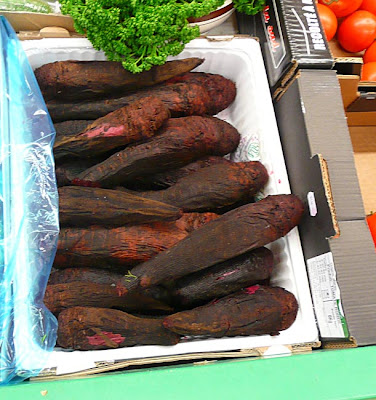 I saw these betteraves longues — long beets — yesterday
in the produce section of the Coccinelle market in Saint-
Aignan. They are sold cooked and displayed unwrapped.
You might call them baseball-bat beets.
It was fun to go to the outdoor market in Saint-Aignan yesterday. We went to see Mme Doudouille of course — that's where we got the fig pâté, along with some fromage de tête — head cheese — and some smoked pork bacon. Mme Doudouille had time to chat for a minute. She's a new grandmother — her first grandchild is now three months old. She said her family from far and wide is getting together for the holidays, with relatives coming from as far away as Bergerac in the Dordogne.

We stood in a long line to buy cheeses from the regular Saturday morning cheese ladies because the selection and quality of the cheeses they sell are so good. 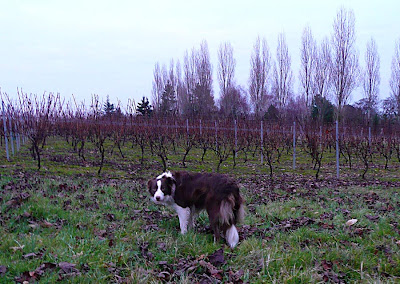 Callie in the vineyard in December, a study in browns
Recently I've been thinking about a cheese called Saint-André that I used to enjoy back in the 1970s, when I lived in Paris. I asked about it yesterday. The young woman who was waiting on me said she'd never heard of it. But the other woman piped up and said, ah, Saint-André is the same thing as Brillat-Savarin cheese. So I learned something. And I bought a piece of Brillat-Savarin. It's a very white, very creamy cheese that's almost like butter, but with a slightly sour tone.

The weather has turned mild, after a few weeks of cold nights and gray days. This morning the temperature is nearly 50ºF (8.6ºC). The same thing happened last year. A cold first half of December gave way to a mild second half. Usually, January here is a lot warmer than December, so we are looking forward to better weather. 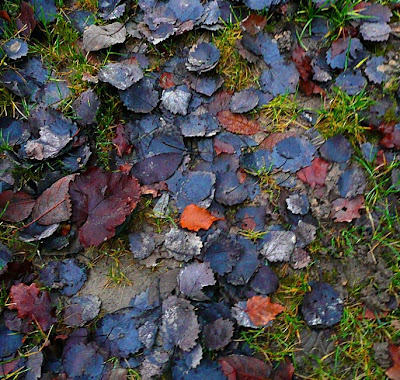 The autumn leaves are turning black on the ground.
And the days will start lenghthening after today. Right now it's 8:10 a.m. and it is still very dark outside. I need to take Callie out for her walk, and I need to get back before 9:00, because that's when the hunters arrive. But it's still too dark. I'd better go anyway.
Posted by Ken Broadhurst at 07:48