Walking ... er, climbing ... around on the Mont St-Michel

What did we do after lunch at the Mont Saint-Michel? I told Walt that my report would be: we walked around the ramparts leaning into the wind so that we wouldn't blow away. We climbed up and down the old narrow streets and staircases so many times that we nearly wore a path in the stone. We walked in the mud. Then we sat down at the Vieille Auberge to have a pre-dinner glass of wine and it started raining — so we sat there in the rain and enjoyed our apéritif.

In Normandy, you are supposed to experience the rain. You might as well enjoy it. The fine Normandy drizzle is good for your complexion, they say. So we sat out in the rain and enjoyed it. 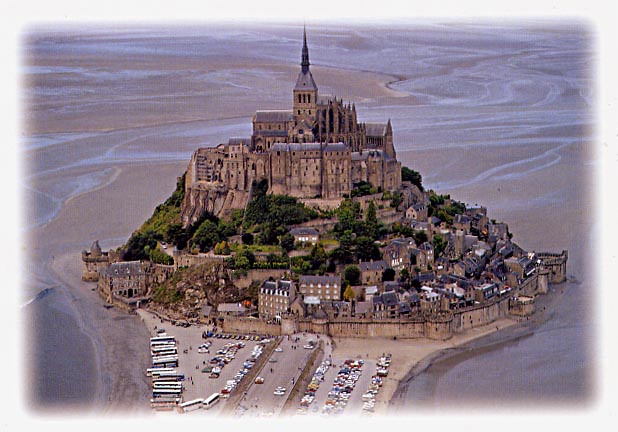 A postcard I bought shows the Mont surrounded by mud.

If all that doesn't sound like fun to you, you can skip the Mont Saint-Michel on your next trip to France. At least it wasn't crowded.

Most of the time, the Mont Saint-Michel sits out in the middle of a gigantic mudflat. Only once in a while does the tide flood in and really turn the place into an island. Or a peninsula, strictly speaking, since the man-made causeway that links the Mont to the mainland doesn't get flooded. There is a plan to demolish that causeway (la digue, in French, which means "dike") and replace it with a bridge, turning the Mont back into the island it used to be. 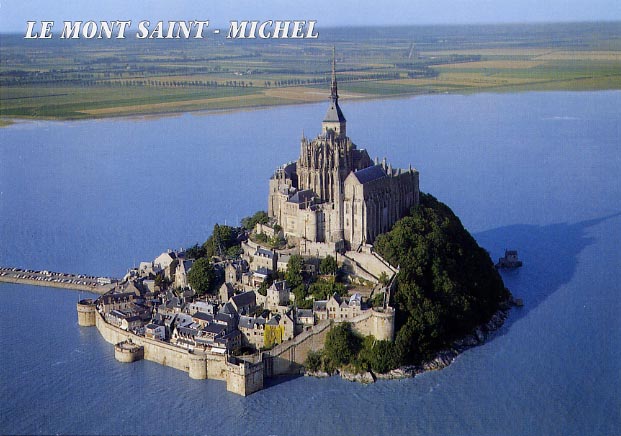 Another postcard: the Mont is virtually an island at flood tide.

From up in the village and on the ramparts around the edge of the Mont, you are treated to wide views of the surrounding mud flats, with gulls and other water birds soaring over them. There are rivers of water flowing through the grayness of the mud. 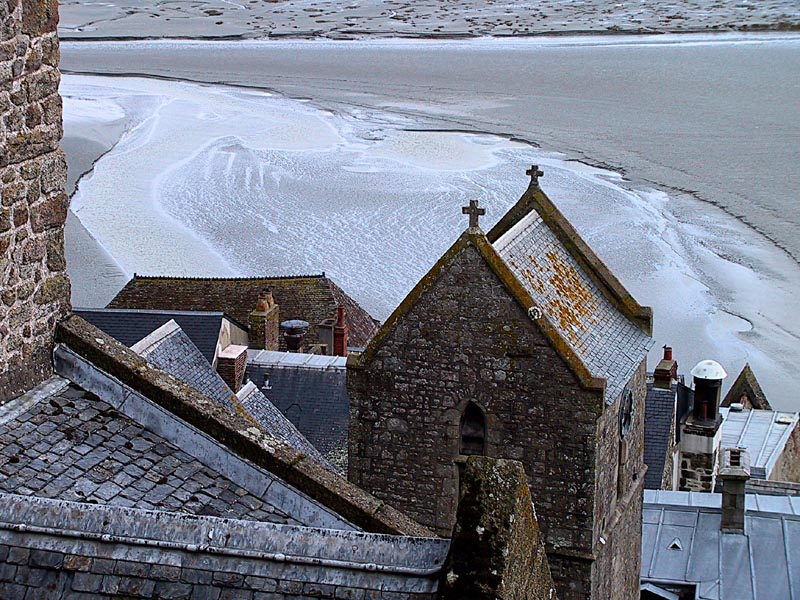 Views over rooftops out to the mudflats

Walking the circle that includes the higher streets of the village and the ramparts on top of the old walls wouldn't take very long except for the many stairs there are to climb. We must have walked around three or four times as we waited to see evidence that the tide really was going to rise and water was going to surround us. After the third or fourth time, I suggested that we take a walk out on the causeway to see the views from there. My legs were aching.

We had already had a causeway "incident" earlier. When we first arrived, we were told to park in one of the lower lots — a lot that was supposed to be flooded at high tide later in the day. "Walk up to your hotel," the parking attendant said, "check in, and get your key. With the key you will get a 'badge' that will open the gate to the parking lot reserved for hotel guests. Park your car there. That lot doesn't flood." 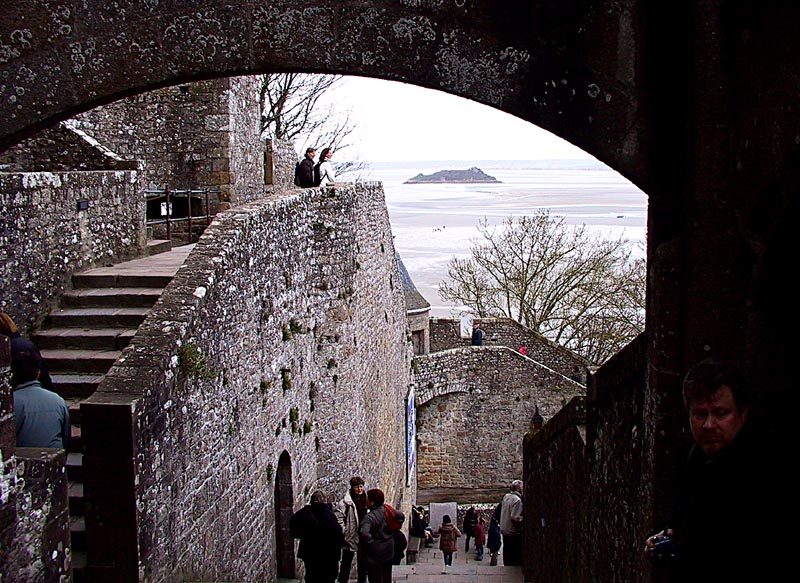 Up an down stairs with views of the flats.
That's Walt on the lower right.

We followed those instructions. But we couldn't get the "badge" we were given at the hotel to open the gate to the hotel parking lot, which is up on the causeway. I sat there in the car in front of the gate, motor running, for what seemed like an eternity while Walt tried everything, waving the so-called badge in front of every part of the gate and surrounding posts that looked like it might be the badge reader. Nothing doing. Electronics! Phooey! 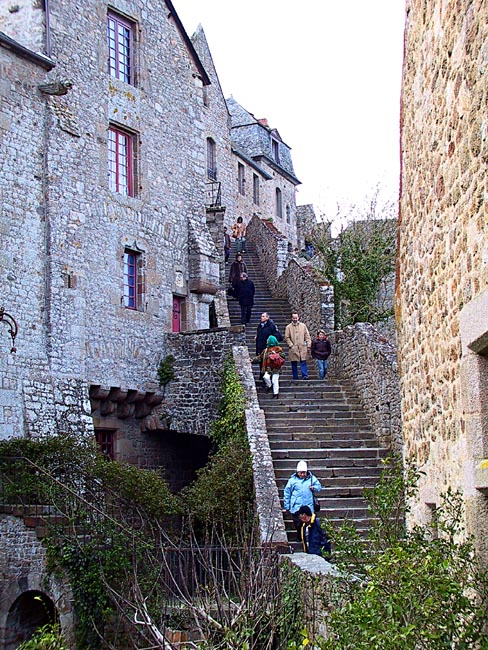 Up the steps and then back down: sore calves

Finally, we drove back out to the parking attendant's booth and asked the person to explain once more how it was supposed to work. She did. We drove back up, and there was a man about my age there doing the same thing Walt had been doing — waving the badge around in front of every opening, slit, or box that looked like it might contain the badge-reader. Walt talked to the man and then tried again and voilà, the gate opened! 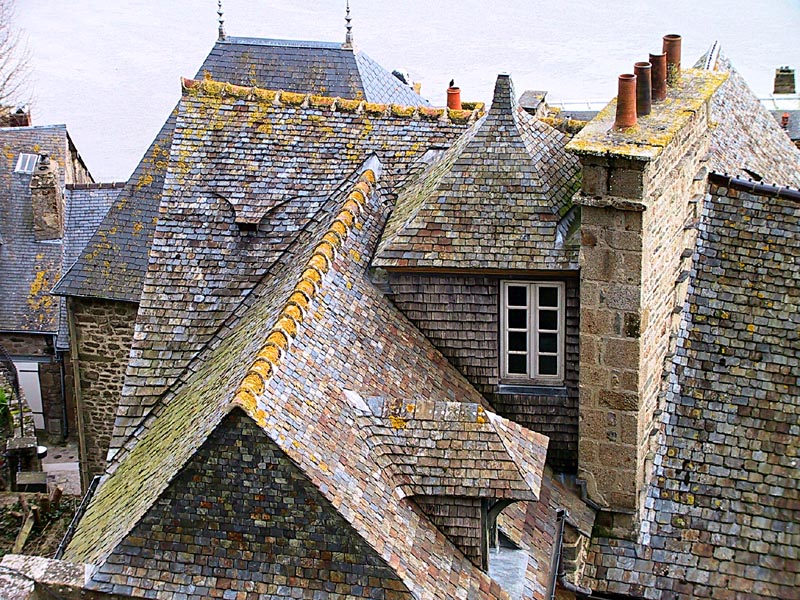 The man thanked us profusely. He said he had been there for five minutes trying to get it to work and feeling like a fool. We had done our good deed for the day, and we managed then to park our car out of reach of the impending waves. We were fed, we had the key to our room, and the car was safe. Now we could enjoy the afternoon.
Posted by Ken Broadhurst at 08:48