I could talk about pollen allergies for days. Mine began suddenly in early April 1992 when Walt and I moved from San Francisco to Sunnyvale, in Silicon Valley, to be closer to our jobs. When the reactions started, I didn't know what was happening to me. I went to an emergency-care clinic, where a nurse told me it was the most impressive allergy attack she had ever seen. She gave me a shot of cortisone.

One year in March I flew from San Francisco to Seattle for a conference. In California the allergies were raging. When I got off the plane in Seattle and went to my hotel room, I took a shower. It was a miracle. All the allergy symptoms were gone, just like that. I figured it was because spring came later in Seattle than in SF. 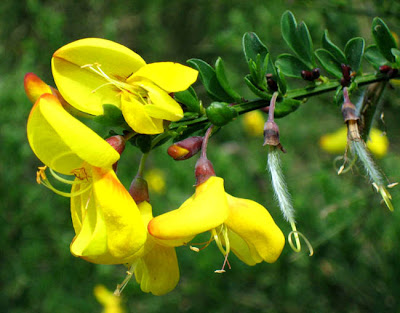 Scotch broom — in French, genêt à balais.
The genêt plant was the symbol of the Plantagenêt dynasty,
which long ruled over this part of France and all of England.
(Source)
Another year we flew from San Francisco to Las Vegas in early February. In California, I hadn't had symptoms yet that year. As soon as I got off the plane in Las Vegas, it was as if somebody through a bucket of pollen in my face. I spent a miserable weekend.

One spring down south of Palm Springs we drove into a huge orange grove that was in full flower. I didn't think I would get out alive. 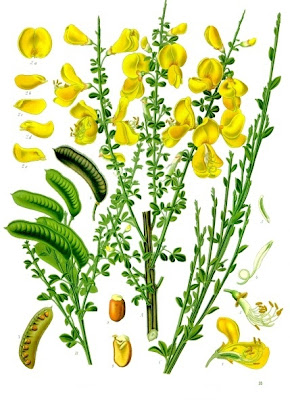 Gênet à balais, thanks to the French Wikipedia
Once I flew from San Francisco to Philadelphia on my way to Ireland for a work trip. I thought I was going to die on the plane to Philly. It was October, so I was taken by surprise. I don't know where that plane had been and what kind of air was circulating in the passenger cabin, but it caused a major allergy attack in me. When I got to Philly, I went to buy some tissues and to make the decision about whether I would be able continue on to Ireland or not. The man in the shop where I bought the Kleenex was concerned about me; he wanted to call a doctor. After an hour in the airport, the symptoms started to disappear. I flew on to Ireland, holding my breath (as it were) and hoping I wouldn't have another attack. I didn't and was fine for the rest of the 10-day trip. 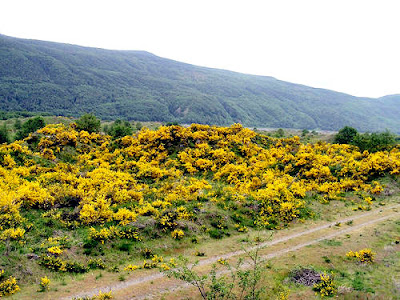 Scotch broom covering a hillside
(Source)
In 2002 we flew from San Francisco to Paris on April 1. We always enjoyed coming to France, but coming over here on April 1 was an experiment. When we left California, my allergies were raging. On the 11-hour flight, I remember Walt saying to me that he thought I was going to die. When we got to Paris, we took the train from the airport into the city, and every tree in sight was covered in little white flowers. I was sneezing and my eyes were red, puffy, and teary. I said I didn't think I was going to be able to stay in Paris — we would have to go somewhere else.

We got to the apartment we had rented, I took a shower, and, as in Seattle, the symptoms just went away. I was fine, even though there were flowers everywhere. We went out to Normandy for a couple of days and the millions of apple trees up there were all in flower. Didn't bother me a bit. That's when I realized I was allergic to something specific to California and finally went to see the allergist when we got home. The allergist helped me decide that Paris, Normandy, or elsewhere in northern France was the place for me. He said he could try to treat me but that the best solution would be for me to go live somewhere else. We ended up in the Loire Valley. 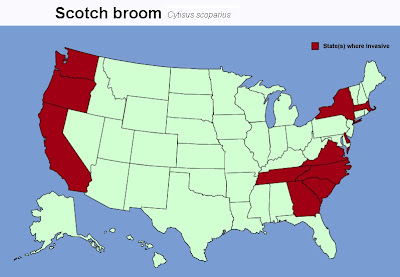 Scotch broom has invaded all these states in the U.S.
(Source)
In 2004, after we moved here, we took a driving trip to Madrid. That was about 12 hours on the road, and the highway was lined with Scotch broom plants that were covered in yellow flowers. I had a severe reaction — so much so that I was unable to drive. Walt had to drive the whole way. By the time we got to Madrid, though, there was no more Scotch broom visible, and it was over. So I figure I'm allergic to that plant's pollen, along with cypress, orange, and olive tree pollen.

When the two big fir trees right next to our house are releasing clouds of yellow pollen that covers our deck and window sills, it doesn't bother me at all. Strange, isn't it? 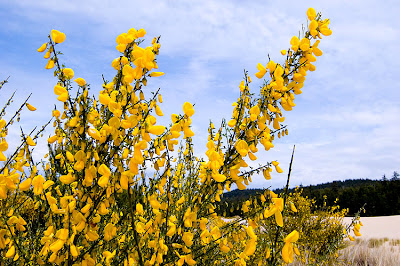 Pretty yellow flowers, right? Yuck.
(Source)
Some allergy symptoms hung on yesterday but in a much milder form than on Thursday. It's Saturday morning and I'm feeling OK, except that my abdominal muscles are sore from all the sneezing I did during the worst of the attack.
Posted by Ken Broadhurst at 08:11