The weather, the window, and the dog

It rained most of the day yesterday and was very gray. The weather system came in from the west and seemed to bring with it a lot of some kind of pollen that I'm allergic to. I had a miserable day — sneezing, teary eyes, dripping nose — like a lot of springtime days I used to suffer in California when I lived there.

One of the reasons I wanted to leave California was because I had such bad pollen allergies back there. It would start in February and I would have debilitating hay fever from then until the middle of May. An allergist tested me and told me the pollen that I was most allergic to was coming from all the cypress trees that grow along the northern California coast. Olive tree pollen was also an irritant. 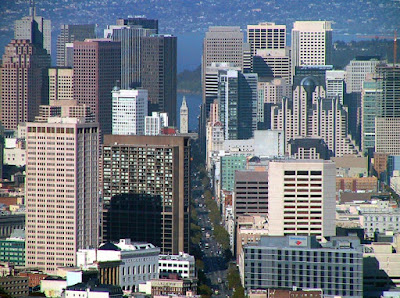 San Francisco, March 2003. A long way from Saint-Aignan.
Given that diagnosis, going to live in northern France seemed to be a good plan, the allergist said. Another option was the Pacific Northwest — Oregon or Washington State. The American southwest was out, the doctor said, because it's home to several species of cypress trees. I had experienced that myself when I had a terrible allergy attack on a trip to Las Vegas one spring. And the south of France was out — too many cypress trees and too many olive trees grow down there.

So here I am. Now I think I am also allergic to the plant called Scotch broom — genêt in French. And it is blooming all around us right now, with bright yellow flowers.

I've had very few miserable days of hay fever since we moved to Saint-Aignan nearly four years ago. Yesterday was one of the worst, but today I feel better. It's strange how I'll have one or two days each season, but never a longer stretch, of sneezing and nose-blowing and itchy eyes. I guess you just take what you can get. The attacks, when I have them, are impressive and debilitating. I must have sneezed 50 times yesterday. It's not safe for me to drive a car when I'm in the middle of an attack. 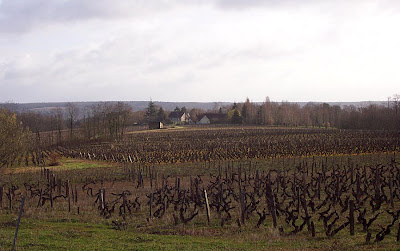 La Renaudière, near Saint-Aignan, March 2004.
Contrast with photo above. Quite a change.
The window contractor came by yesterday and we signed off on his bid to put in the new window. We decided to go with the undivided glass and a roll-down shutter for that window. I'm pretty happy about it. It'll be so great to have a sliding window in the kitchen. I spend a lot of time in that room, and now I'll be better able to control the environment in there.

Earlier this week, I went out for a drive all around Saint-Aignan to look at the windows in houses of all different styles and ages. I saw a lot of windows of both styles, paned or clear. There is no obvious local style.

This week, I read a New York Times article about some Americans who bought a house in Spain and hired a local architect to help them modify and modernize it. When they told the architect what they wanted to do, he stormed out of the house in anger, saying he refused to preside over the Americanization of a fine old Spanish house. Oops! They found another architect who was willing to work with them.

Our window guy, Mr. Roch, said he would be able to install the new kitchen window in late April if it is ready by then (it has to be custom-made) or, if not, toward the end of May. He's already booked for the first three weeks in May.

We decided to call the new puppy Callie, by the way. Instead of a longer name like Calisson or Californie that would give us the nickname Cali, we just went with the nickname itself. Callie is five weeks old now, and we won't bring her home from the breeder's until she's 10 weeks old. That'll be the first week in May. Maybe the weather will have improved by then and we'll be able to spend a lot of time outside with her in May and all summer. By September, Callie will be six months old and pretty grown up.
Posted by Ken Broadhurst at 07:58