The little pond just outside our back gate is the scene of much springtime debauchery. All the toads that live under bushes and rocks for hundred of yards around gather there in March and April to produce the year's crop of new toads. For a while the pond is wiggly with tadpoles. 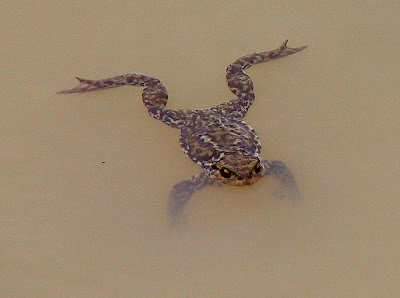 Sometimes on a warm summer evening you'll hear something rustling the leaves under a bush near the house. A snake? A rabbit? Some rodent? No, it's a toad. They are big, brown, and pretty ugly, most would say. 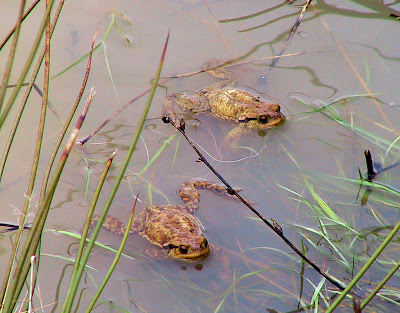 They eat bugs and slugs though, so it's good to have them around the property. Every spring, when I get out the rotary cultivator and start tilling up our vegetable garden, I uncover a toad or two. They have buried themselves in the loose soil to hibernate, I think. I try not to run over them. 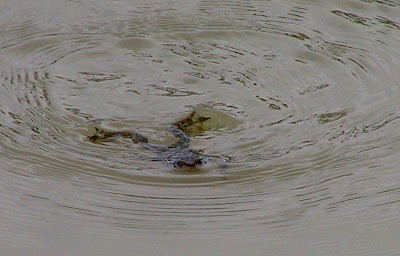 Oh, toad in French is crapaud (krah-POH). Thought you'd want to know that. I just looked at the Wikipedia article on crapaud in French and it says: « Tous les crapauds (au sens large du terme) sont des espèces protégées en France. » Which means that there are several species of toads in France, and they all are protected by law. (No wisecracks, please.)

The French Wikipedia article also points out this about the common toad: « Fréquentant les milieux humides, il vit sur terre la plupart du temps, dans l'eau uniquement durant les périodes d'amour. » Or, "frequenting humid surroundings, [the toad] lives on land most of the time, [and] in water only during periods of love." That's a literal translation.

I'm happy to say that toads do not appear to be endangered at La Renaudière.
Posted by Ken Broadhurst at 09:12