Dinner, the tides, and the rain 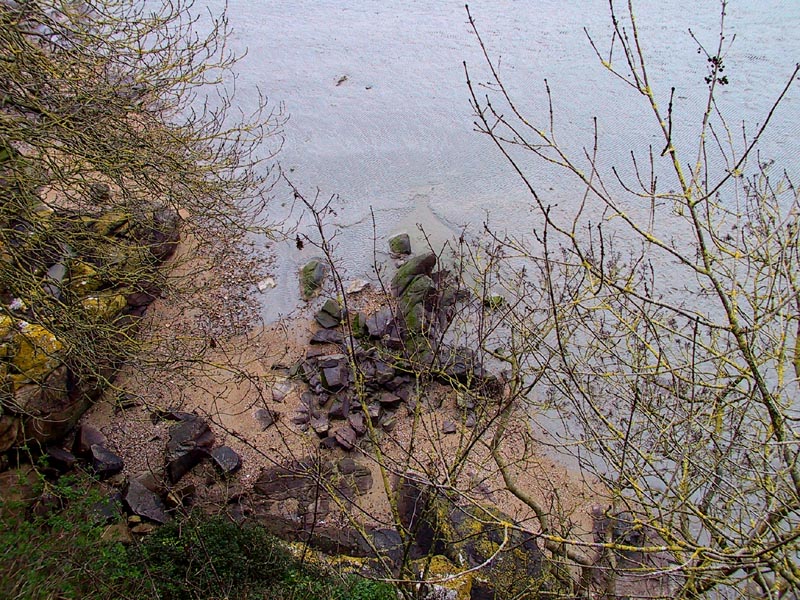 The tide finally started rising around the Mont
After sitting out in the light rain to finish our white wine apéritifs, we left the Vieille Auberge and walked out onto the ramparts one more time to see if the tide had come in enought to surround the Mont Saint-Michel completely. It had risen, but it wasn't yet as high as we had hoped to see it. But it was after 6:00 p.m., showery, and starting to get dark.

We decided to go back to the room and rest a little before going back out for dinner. We turned on the TV and put on Laurent Ruquier's nightly « On a tout essayé » program, which can be kind of silly but at least is in French and gives you an idea of the kinds of topics that are being discussed at Paris dinner parties that week and day. It's a way of staying in touch with French popular culture and the latest controversies, buzzwords, and catch phrases.

At 7:00 p.m., to our surprise, loudspeakers started blaring warnings in the street just below our hotel room window. The message was broadcast in French, English, German, and other languages. "If you have left your car in one of the lower parking lots, now is the time to move it up to the causeway. The lower parking lots will soon be flooded by the rising tide. You must go and move your car now!" Last call. 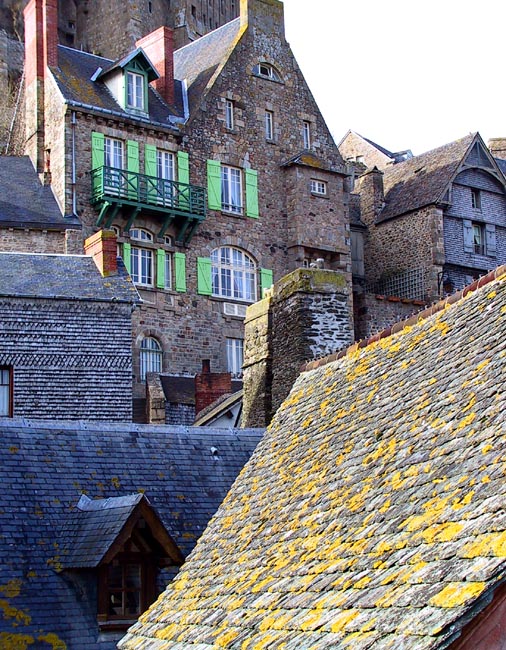 Yellow roof lichens and bright green shutters
We got ourselves ready and left the room just before 8:00 to go find a restaurant for dinner. The Vieille Auberge's restaurant, where we had had lunch, wasn't open for dinner. Some of the choices were La Mère Poulard, which seemed pretty expensive; Chez Mado, a very spare, hip-looking place where there were one or two tables occupied by diners by 8:00; Le Saint-Pierre, which is a Logis de France and seemed like a possiblity; and Le Saint-Michel, which seemed to be the least expensive of the five restaurants we found open; and, finally, Le Mouton Blanc, where we ended up going.

I remember thinking that I would be willing to pay 16€ to eat 12 good oysters. Le Mouton Blanc appealed to us more than the Le Saint-Michel, which appeared to be a bar with just two or three tables set up for diners inside, at street level. Those tables sat empty.

I wonder if Le Saint-Michel doesn't have a dining room on an upper floor, but we didn't find out. One advantage that the other two restaurants had over this one was a choice of oysters. There were ones from Cancale in Brittany and from the Chausey Islands on their menu, but the Saint-Michel's menu just listed "oysters," if I remember correctly. 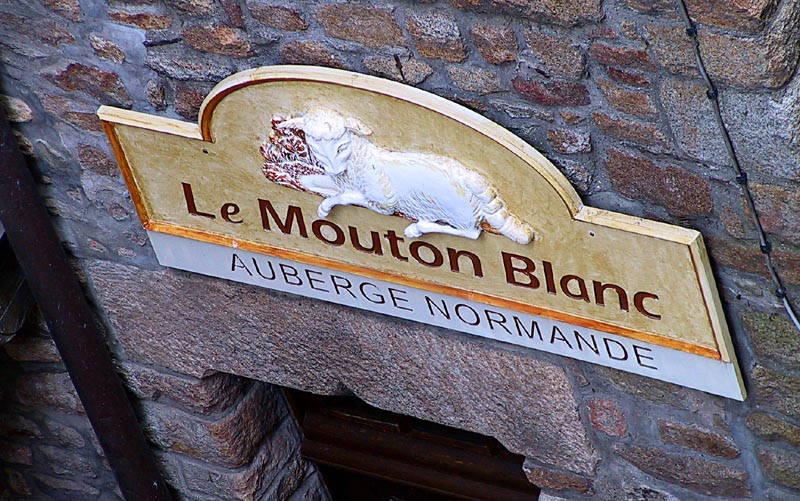 Seen from the window of our hotel room
The dining room at Le Mouton Blanc, which we could see into through windows on the street, was more attractive. And here were eight or ten tables occupied by people who seemed to be enjoying their food. There was a big fireplace (but I don't remember there being a fire in it).

We went in and got a table. The waiter brought the menu and we looked it over again (after having looked at the copy on display outside the restaurant door). When I looked at the choices on the 26€ "prix fixe" menu, I had second thoughts about eating just a dozen oysters for dinner.

Both of us, however, decided to have oysters as our starter course. They served the oysters six to a plate, three from Cancale and three from the Chausey Islands. They were strangely presented, however. Instead of being served on the half-shell, as is customary, these were served whole, though partially opened, on the plate. 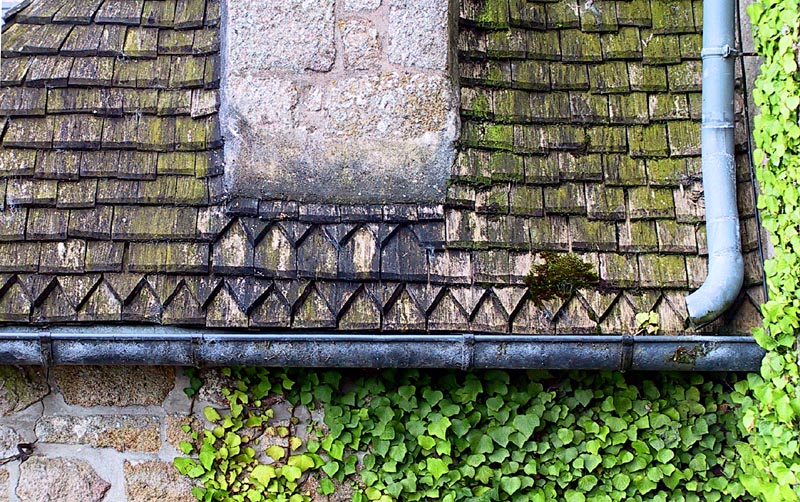 Luckily the oysters were delicious, so it was worth the trouble. But the presentation was a little rustic, not to say slap-dash. Several lemon and lime wedges decorated the plate, as well as a little bowl of mignonnette sauce (vinegar with chopped shallot and coarse black pepper in it). The plate was very crowded, then, and the top shells of the oysters had to be put somewhere. It would have been much better if they had brought the oysters to the table on a big platter, as is often done, and let us take them onto our plates one at a time, putting the empty shells back on the platter as we finished each oyster.

As a main course, I decided to have grilled gambas, or prawns. As we sat there, I watched a couple at a nearby table eating mussels and French fries, and the fries looked really appetizing. So I asked the waiter what came with the prawns, and told him I would like fries with mine. He said the prawns were normally served with rice. I asked him to bring us a platter of fries as an extra; we would share them. 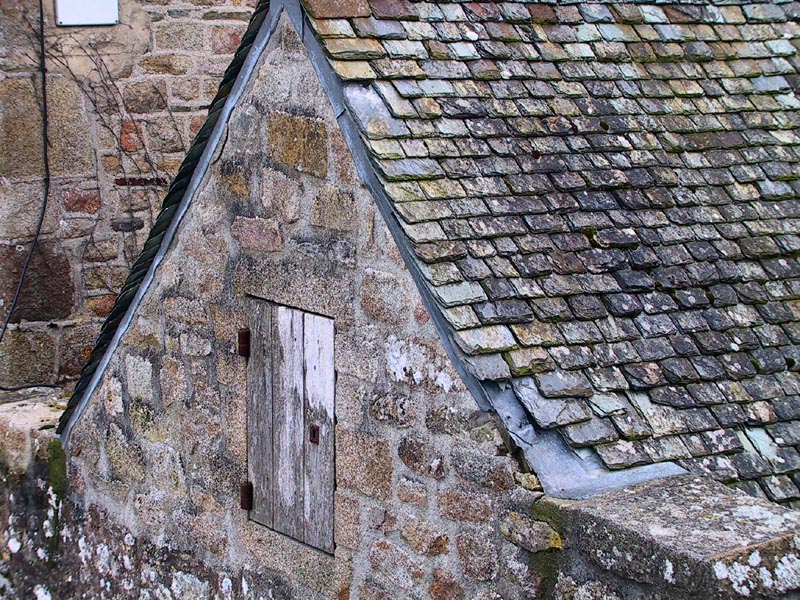 A wooden attic door and slate roof tiles
The rice might have been a clue to the way the prawns (and Walt's scallops) were to be served. It was all brought more of less Asian style — the prawns with some salad on a rectangular white plate, and a separate rectangular white plate holding a bowl of steamed rice and a bowl of sauce. The sauce was either diced eggplant or diced cooked ginger in a sweetish, vinegary liquid. It was delicious. But the fried potatoes, as good as they were, really didn't go with it at all.

The prawns were very hard to eat with a knife and fork. I guess I could have used my fingers, but I didn't. Each prawn (four of them) was served intact — head, legs, and shell. By the time I cut off the head, there really wasn't much left to eat. And I had nowhere to put the heads but on my plate. That got kind of messy. I carefully "peeled" each shrimp with my knife and fork, and what I did finally get to eat was good. But I should have had the scallops.

That's a lot of detail, but my point is that it was surprising if not disconcerting to be served Asian-style food in a restaurant called Le Mouton Blanc (The White Sheep) on the Mont Saint-Michel. To wash it all down, we ordered and enjoyed a bottle of Sauvignon Blanc from the Valençay wine region, which is just about 10 miles east of ... Saint-Aignan. The wine was very good, and I think it was 22€ for the bottle. 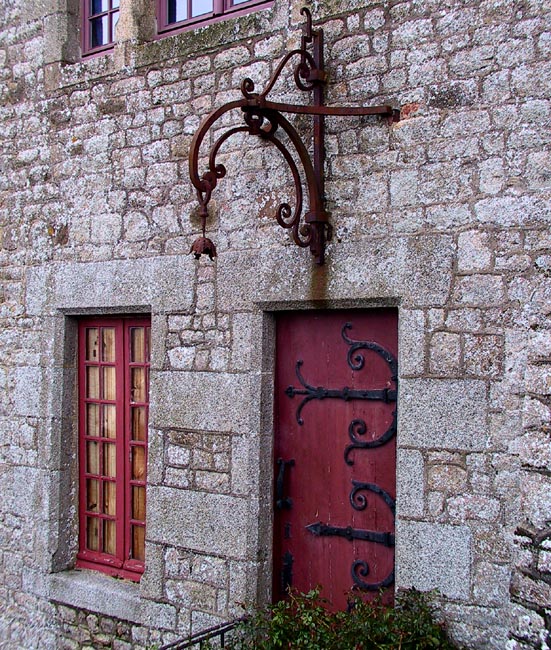 Red window, red door
The Asian-style food made sense in at least one way: several of the tables in the restaurant were occupied by young Japanese tourists. Right next to us were three 20-something Japanese guys. One of them had the oysters, and the other two had plates of foie gras for their starter. Then two of them had another Mont Saint-Michel specialty, gigot d'agneau (roast leg of lamb). The third had rack of lamb. The lambs that graze on the salty grasses around the edges of the Baie du Mont Saint-Michel are famous for their flavorful flesh.

I don't even remember what we had for dessert. Sorbets, I think. Oh yes, green apple sorbet with calvados (apple brandy, a Normandy specialty). When the time came to get the check, the waiter absent-mindedly put it on our neighbors' table instead of ours. They looked surprised, and Walt looked at the three Japanese guys in mock surprise himself and said an enthusiastic « Merci ! » They all burst out laughing.

When we left the restaurant, it was misty but not actually raining. We walked out to the causeway to see if the parking lots were flooded. They were not, though the tide was right up to their edges. There's a raised wooden boardwalk you take from the end of the causeway over to the main gate at the Mont, and it was sitting high and dry.

We walked back up the main street and stopped in the bar/restaurant at the Saint-Pierre for a little digestif before turning in for the night. I had an armagnac and Walt had a calvados, I think. The Saint-Pierre's dining room was attractive and there were several tables of diners who seemed to be enjoying the food. There was a hot fire in a big stone fireplace. Next time we'll have to try eating there (if we ever go back to the Mont). 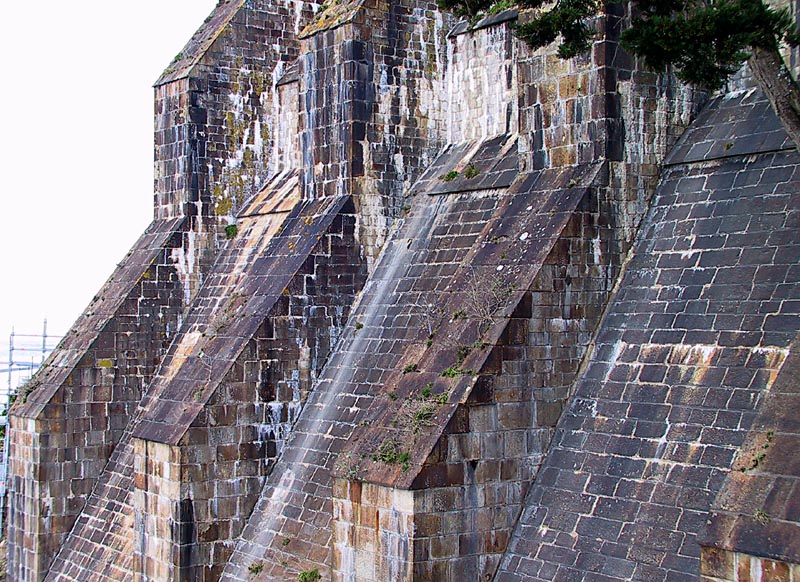 Stone buttresses holding up the enormous Mont St-Michel church
The next morning, I woke up at 7:00. It wasn't actually raining when I looked out the window. While I got my shower, Walt looked out the window and through the gap between the two buildings out onto the mudflats. He said he could see the water rising. I looked and, sure enough, you could see it, and it rose pretty fast too. Where there had been mud, after three or four minutes there was water. Walt got his shower, we packed up, and by 8:00 we were out of the room. That was the earliest we could check out, they had told us. And it had started to rain cats and dogs (as was predicted).

We hauled our bag and camera bags up the stairs, out the door, and through narrow streetes over to the hotel registration desk (our room was in a separate annex) and checked out. The woman was bright and friendly, and she charged us the 50€ promotional rate I had hoped I had really signed up for (even though the sign on the back of the hotel room door said it normally went for 75€). I asked her if the room had recently been remodeled, and she said it had. I told her it had been very comfortable, which was the truth. The bathroom was obviously brand new.

We then hauled our bags down through the main street and back out to the causeway parking lot in a heavy, wind-driven rain. We didn't get thoroughly soaked but that was only because we scraped along the sides of the buildings along the street to avoid the worst of the downpour. 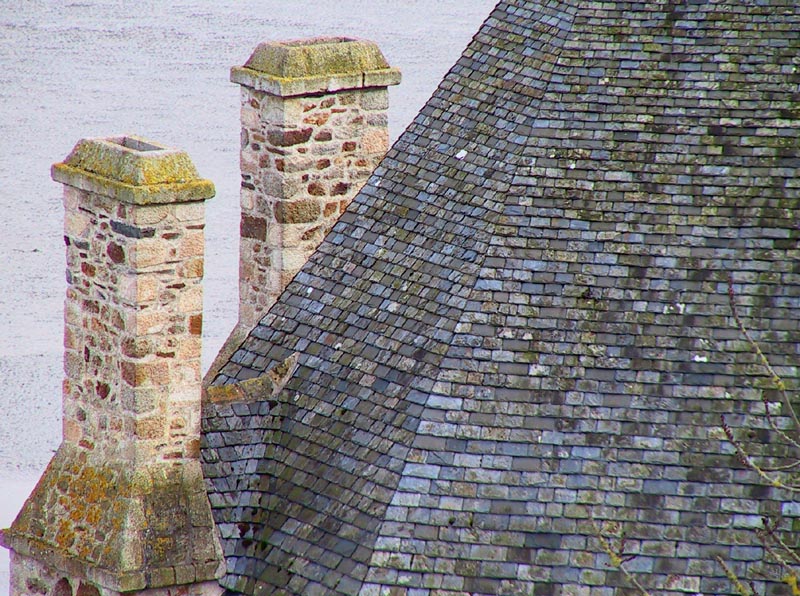 Stone chimneys
When we arrived at the wooden walkway leading from the main gate up to the causeway parking lot where we had left the car, the lower end of the ramp was under water. Whether it was because of the combination of rain and tide, or whether a wind shift overnight had pushed more seawater up into the bay, I don't know, but the tide was considerably higher in the morning than it had been the night before.

The Mont really was surrounded by the tide, and only the high causeway was still above water. The problem was, it was raining so hard I couldn't really take any pictures. Walt snapped a couple and posted them on his blog.
Posted by Ken Broadhurst at 07:48