[Walt just pointed out to me that my train wreck metaphor is not clear at all. What I meant was that I hope that this upcoming puppy-raising experience won't turn out to be too hair-raising. This seems like a big decision and a long-term commitment, and I'm hoping we've done the right thing. Don't need no train wrecks. I'll be writing more about it, as you can imagine.] 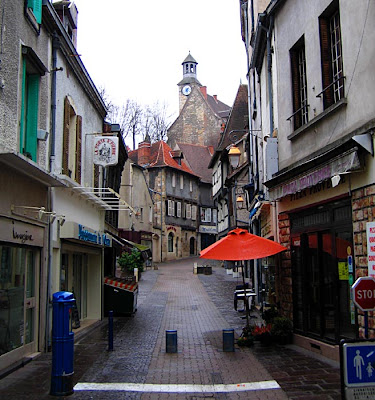 We were the only people lame-brained enough to be
out on the streets of Monluçon on such a cold day.
The old town looked a little sad, but not nearly as sad as the sprawling industrial area that seems to occupy three-fourths of the city's territory. Because I had read on Wikipedia that the population of Montluçon was 42,000, I pictured a charming, bustling little city set in hilly countryside. I remembered it that way from an earlier visit in 1995. I guess I was jet-lagged that day, having arrived from California only 24 hours before. 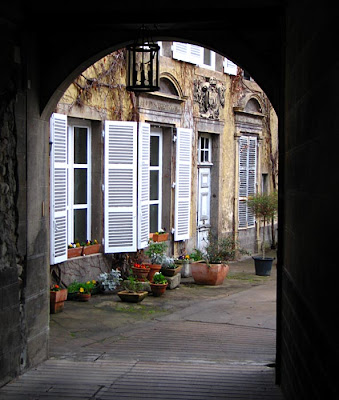 In a nice courtyard in old Montluçon, an architect's offices
Montluçon yesterday seemed much bigger than the population figures would indicate. It seemed a little grimy too, but then a lot of places seem gray and run-down when the weather is dreary and cold. We left Saint-Aignan at 9:20 a.m. and drove on the A-71 autoroute at 80 mph to an exit about 15 miles north of Montluçon (toll: 10.50€). It was only 11:00 and we figured we could take the "scenic" route along the Cher River for those last few miles.

It wasn't all that scenic, however, and we drove through an extensive built-up area, with much traffic and many stop lights, before got into the town itself. It reminded me of Vierzon or Châteauroux — not exactly picturesque. We parked and after a minute or two it started snowing a cold, wet, wind-driven mix of rain, ice pellets, and heavy snowflakes. 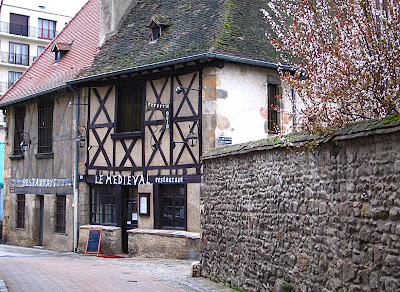 We had already had lunch by the time we saw this restaurant.
We walked around, damp and freezing, until we had seen and had enough, and then we ducked into a café and ordered a glass of white wine while we waited for the clock to strike noon. Walt said: "This is your typical French experience for the day," referring to the very plain, slightly seedy, and deserted café where Serge Lama's plaintive 1970s classic « Je suis malade » was blaring out of the sound system. 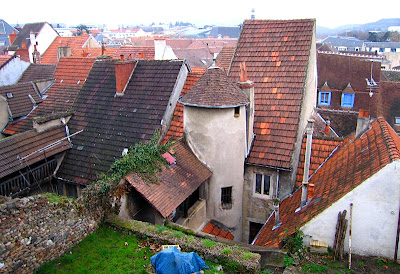 The rooftops of old Montluçon
Trudging through the medieval town and up to the château built by the Dukes of Bourbon, we had seen half a dozen restaurants along the old pedestrian streets. One was Indian, two were Chinese, and the rest were pizzerias. We picked one that served pasta and pizza. We weren't the only customers, I'm happy to report. Walt had snails and I had a salade niçoise as a first course, and then we both had pizza with ham, cheese, and mushrooms. We weren't disappointed with the food. 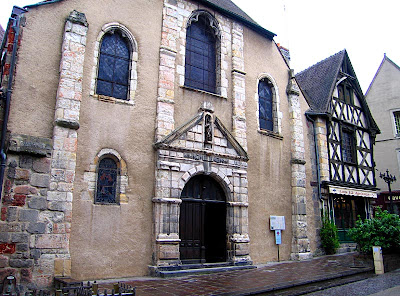 A church and an old house in the historic district of Montluçon
We ordered a bottle of red wine from the nearby Saint-Pourçain wine area, which we had never heard of before. A card in one of those little clear plastic stands on the table said the wine was made from Gamay grapes, the same as our Touraine wine and as Beaujolais. It was a 2004 and it was good. « C'est du cent-pour-cent Saint-Pourçain », I told Walt.

After lunch, we drove about 30 km east past the towns of Chamblet, Commentry, Doyet, and Bézenet before turning south toward Saint-Bonnet-de-Four and our destination, Ventuile (commune de Blomard). There we arrived at the Élevage du Berger de la Vallée des Géants and — this is the part where it becomes clear that the train is headed into the wall — signed the papers to buy a border collie puppy that was born on February 22 and that will be handed over to us vaccinated, de-wormed, microchipped, and registered in the LOF (Livre des Origines Françaises). 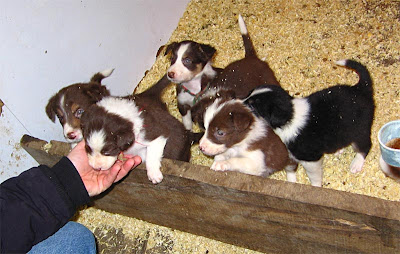 Irrésistibles — the unnamed puppy that
is licking Walt's hand is the one we're getting.
We'll drive back to Ventuile sometime around the first of May to bring the 10-week-old puppy home. Despite all the good advice (can you say "warnings"?) of good friends, we ended up being hard-headed about it. We really wanted a puppy this time, because that's a time of life we didn't get to enjoy with Collette. She was about six months old when we found her at the SPCA. 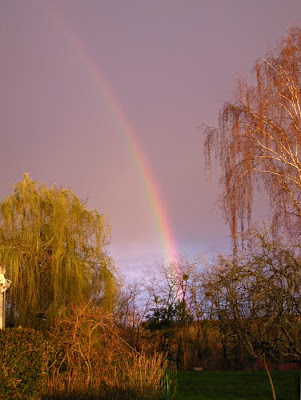 Maybe this rainbow we saw when
we got home yesterday is a good sign.
Posted by Ken Broadhurst at 05:43