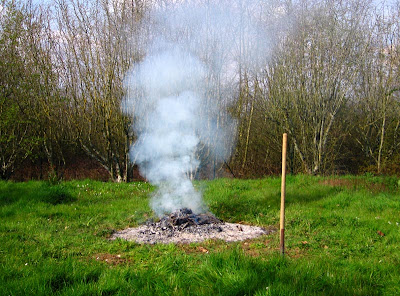 Burning yard debris — a first sign of spring.
It was nearly all burned up at this point.
One of the first tasks we have "assigned" to us when the winter weather finally breaks is picking up all the little tree limbs and clippings that have accumulated around the yard over the past five months of winter. And then we burn them, along with the rest of the "burn pile" that has accumulated since last summer. 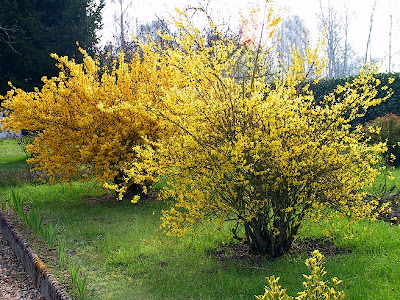 Forsythia in the back yard
Yesterday was a beautiful day with almost no wind, and we burned the burn pile. It doesn't seem like that big an accomplishment, but it did mean moving 5 or 6 wheelbarrow loads of clippings and trimmings to the garden plot, picking up all the rosebush clippings (watch the thorns!) and a bagful of pine cones, and hauling across the yard the remains of a small tree that Walt cut down last September. 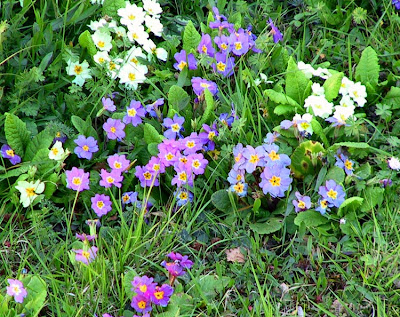 Primroses appear in February and bloom into April. 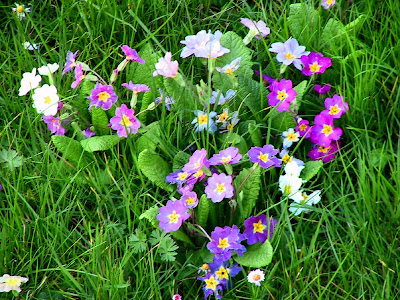 It's too bad to have to cut them down with the mower.
It didn't take too long to gather everything up and light the fire, but we stayed outside for about 4 hours That's the first time since last September that we've been able to stay outdoors for such a long stretch. The good news is that is was actually warm, and we pulled out a couple of chairs and just sat watching the fire burn for about 2 hours. Walt said: "It feels like we're on a camping trip." And it did. At the end of the afternoon, he said he felt as if he had had a mini-vacation. 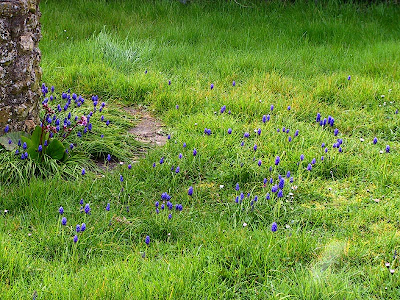 Grape hyacinths (muscaris) in flower
The next milestone will be cutting the grass, which has grown up high because we haven't had a cold winter, and because it didn't get mowed last October — we were in the U.S. But the ground is still too wet, really, and the lawnmower needs some maintenance — mostly a new blade. 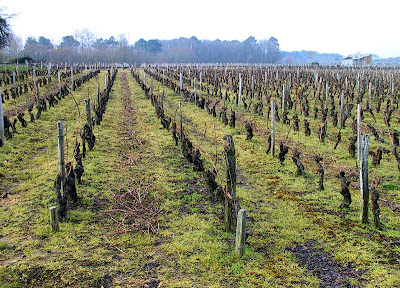 The vineyards still have their winter look.
Besides, cutting the grass means cutting down a lot of wildflowers that appear out there starting in February. There are cyclamens, primroses, and, now, grape hyacinths. It's a shame not to enjoy them as long as possible while they are in bloom. But soon, maybe next week, the day will come, and we will have to sacrifice the flowers to the needs of the lawn. We can't let it grow up too high, or we'll have to go at it will the weed-eater instead of the mower. 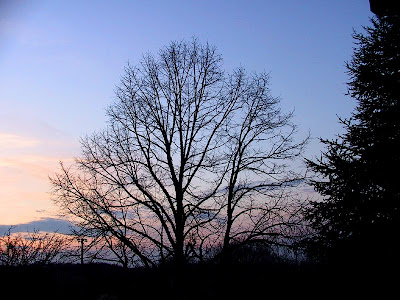 The still-bare linden tree at sunset
shows that spring is just beginning now.
Yesterday the temperature got up to about 65ºF. Today it's cooler, and cloudy. It's supposed to rain. But next week the temperature will get up to 70ºF or higher. If you're in California, that might not seem like anything to write home about. For us, it is big news and an exciting prospect.
Posted by Ken Broadhurst at 08:58