In France, dogs born in 2007 are supposed to have a name that starts with the letter C. We are looking for a name. Here are some that I am favoring at the moment: Câline, Calisson, or Californie. If the new dog gets one of those names, I would call it by a nickname, Cali. That works in English or in French. 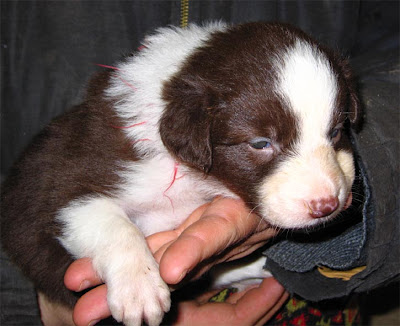 The C*** pup, 21 March 2007. She just woke up.
We have until about April 10 to come up with a name. That is when the puppy will be registered in the Livre des Origines Françaises (LOF). We are working on finding and seeing eye-to-eye on a name. There are of course many many options.

So you expected something other than puppy pictures in this posting? Ha! 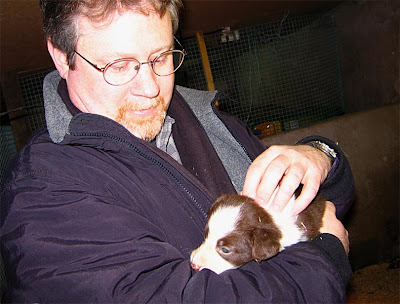 The W*** holding and petting Mlle C***
I'm still dealing with negative feelings about actually buying a dog, as opposed to adopting one from the SPA, the Société Protectrice des Animaux. The dearly departed dog, Collette, came from the Silicon Valley Human Society. We were just lucky the day we went there, I think, to find such a beautiful and affectionate animal. I took us three weeks to come up with a name for her, and we finally picked one out of a dictionary. 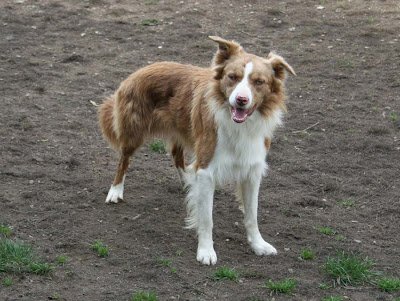 ...and her mère, Ruby du Berger de la Vallée des Géants
The élevage where we are buying Mlle C*** seems very rustic by California standards. It really is a farm. The dogs and puppies live in a stone barn. The courtyard out front was all mud when we were there, and when the daddy dog, Vince, was brought out to greet us, he was all muddy and jumped up on us. 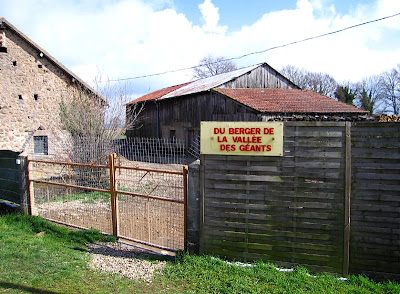 The Kennel of the Shepherd of the Valley of the Giants.
We spent only about 20 minutes with the puppies and now it will probably be six weeks before we see the C*** pup again. We have a busy schedule for the month of April, so the time will pass quickly. And then it will be a busy summer. Talk about "dog days." 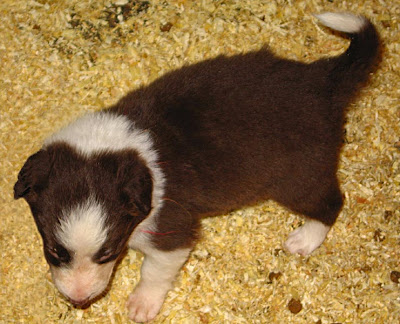 This is the C*** pup. I didn't get a lot of good pictures.
We plan to do crate-training with the new puppy. It's something we never did with Collette. We didn't know any better. But we ended up having to buy a crate — a kennel, called simply une cage in French — for Collette to travel in when we moved to France. So now we'll be able to use it again, along with the collars, harnesses, leashes, bowls, and other pieces of doggie paraphernalia we have stored in the garage. That includes a dog bed my mother made for Collette, who always refused to have anything to do with it. She just stood and barked at it when we tried to get her to sleep on it. 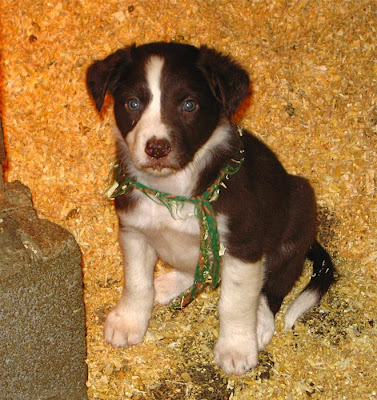 And this is one of the C*** pup's littermates
who was nice enough to pose for a picture.
Near the kennel, there's a funny old church with a twisted steeple — un clocher tors. It's in the tiny village called St-Bonnet-de-Four. There's also a little forest called La Forêt du Château-Charles. Since my first name is Charles, I liked that coincidence. I asked if there was actually a château, but it seems there is not. 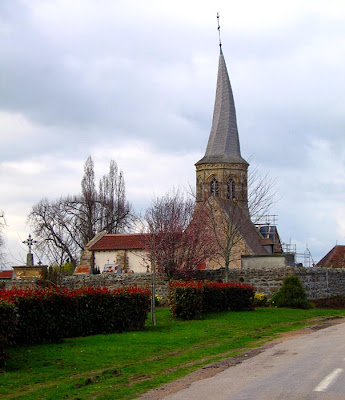 I think these funny steeples are not uncommon
in France, but I don't remember ever seeing one before.