While we are waiting for the warm-ish weather to come back, and waiting even longer for really warm weather to settle in, here are some late winter pictures that might make us feel more optimistic. 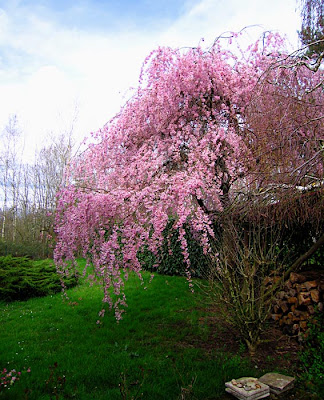 Monday, 19 March 2007: the weeping,
flowering cherry tree in our front yard
We'll be leaving in an hour or so for our drive down to Montluçon and Montmarault, where we'll meet with a border collie breeder early in the afternoon. The weather report says we should expect snow showers, but nothing worse. 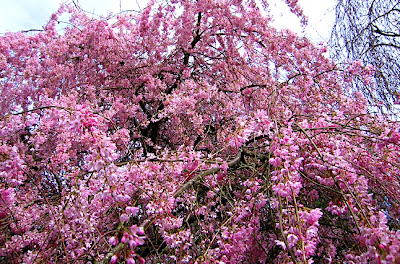 Masses of pink flowers on the cherry tree
We'll be on the autoroute this morning, so it shouldn't take us more than about two hours to get down there. We'll probably have lunch in Montluçon, a town of 42,000 on the upper Cher river. 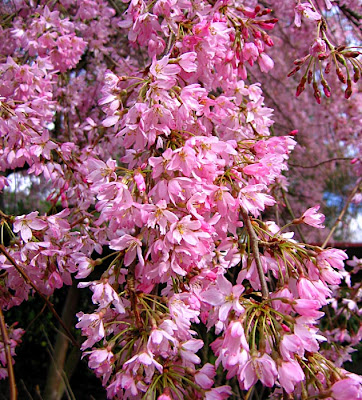 Close-up of the flowers
Montluçon is built on a site that once was occupied by a Roman fort. It was also the home of the dukes of Bourbon, whose line produced the great kings of France from 1590 until the 1789 Revolution: Henri IV and Louis XIII, XIV, XV, and XVI. Louis XIV reigned for 75 years and was called the Sun King. Louis XVI was beheaded by guillotine on the Place de la Concorde during the Revolution.

The Bourbons also reign in Spain. Ha ha, but it's true.

One more fact: the actress Audrey Tautou grew up in Montluçon. 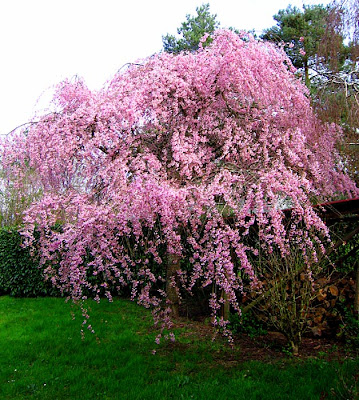 The ornamental cherry tree at La Renaudière
Montluçon is in the Allier department of France, which is also where you'll find Vichy and its waters. And today you'll find us in Montluçon around noon, probably in a pizzeria.
Posted by Ken Broadhurst at 07:53