Salad with duck and potatoes

When Peter Hertzmann came to visit a few weeks ago, he arrived from Le Périgord (aka La Dordogne) with several duck carcasses for stock making, a big bloc of foie gras de canard, three magrets (duck breasts), and several large tins containing duck fat, confit of duck legs, and confit of various gizzards, hearts, and other abats (giblets). Oh, and some duck rillettes packed sous vide (vacuum-packed, shrink-wrapped) too. Peter had spent a week working in a restaurant down there.

While he was here, we polished off the magrets and most of the foie gras. We made stock with one of the carcasses. Last week I opened a tin of confit de canard, which are the leg & thigh sections of a duck cooked slowly in duck fat (completely submerged in it) until the duck has rendered all its fat and gone all tender and tasty. Here's an earlier posting about making confit de canard. 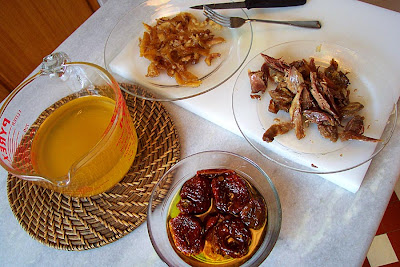 Strips of duck skin for cracklings, shredded duck meat, and
sun-dried tomatoes for a salad, along with a good quantity
of rendered, clarified duck fat for future uses
You can cook the duck giblets, turkey or chicken giblets or legs, or even pork the same way. When you cook duck or other meats slowly in fat that way, the meat isn't seared on the surface and the fat inside the meat and under the skin just melts away. That's the theory, anyway. I know a lot of people are fat-averse, but I'm not. When you take the confit of meat or giblets out of the duck fat and drain everything on a rack or paper towels, you have a fairly lean result anyway.

A lot of people who are averse to eating duck or other meat fat have no problem eating high-fat potato chips or cookies that are almost pure margarine or butter. It's a psychological thing. 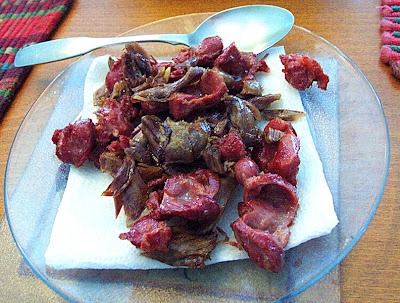 Confit of chicken gizzards and some shredded duck leg meat
This past week, we were invited to lunch by our summertime neighbors whose main residence is in Blois. Maryvonne served a salad with duck gizzards — gésiers de canard — as a starter course. (The main course was venison.)

A year or so ago, Walt and I had bought some fresh gizzards at the supermarket and tried to make a similar salad, which is one we have eaten often in cafés and restaurants and really enjoy. But I didn't know how to cook the gizzards. I just sautéed them in a pan, and they came out tough and rubbery. 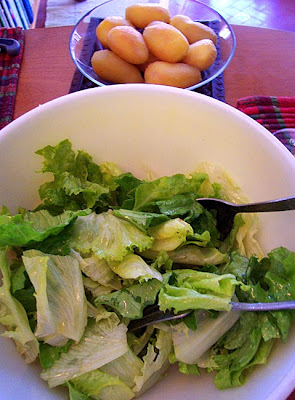 Lettuce in vinaigrette and a bowl of boiled, peeled new red potatoes
I realized at that point that I needed either to cook the gizzards in duck fat until they turned into confit (a long process) or just buy gésiers confits to start with. When I went to the Intermarché supermarket on Thursday, I looked around to see what might be available in the way of gésiers. In the meat counter, near the chickens, guinea fowl, and ducks, I found packages of gésiers de canard and gésiers de poulet already cooked in duck fat and packaged sous vide.

Sun-dried tomatoes and duck-skin cracklings
I bought some, thinking that at home I had lettuce and little red new potatoes that I could use to make a nice salad. Then I remembered that I also had a leftover piece of confit de canard in the refrigerator.

On Friday morning I got out the cooked duck leg and warmed it up in some duck fat that I needed to clarify anyway. When the duck was warm, I took it out and peeled off the skin (I had also saved the skin from the last leg we ate, so I had a good amount). I realized that the duck meat, shredded by hand, would go well with the lettuce, gizzards, and boiled-potato salad I was making, and that I could cut the duck skin into strips and sauté them in duck fat until they crisped up and became what we call "cracklings." That would be a good flavor and texture to top the salad with. 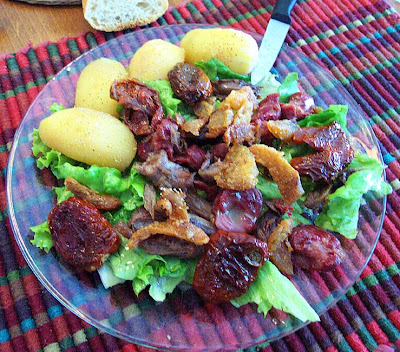 The salad ready to eat
I boiled the potatoes in their skins and then peeled them after they were cooked. I dressed the lettuce with vinaigrette, which is the standard French salad dressing: for a good-sized salad, mix a teaspoon of Dijon mustard, 2 teaspoons of vinegard, and 2 tablespoons of oil. Add salt and pepper and stir well. You can use more or less vinegar, depending on how tart you like the dressing, or more of less oil, to taste. Use any vinegar you want (red wine, white wine, cider, tarragon), and any oil (olive, soybean, sunflower, etc.). 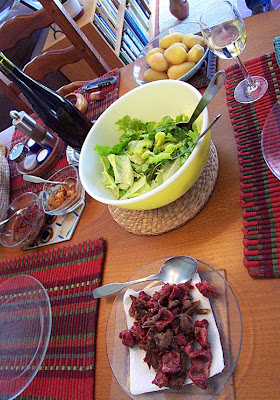 Salad makings on the table
The other thing I put out to have with the salad was some sun-dried tomatoes that I rehydrated in boiling water and then covered in a mixture of olive and sunflower oil. Fresh tomatoes would be even better, but they aren't in season.

This kind of salad, which is almost more meat than greens, is a very common one in French cafés and restaurants at lunchtime. It makes a balanced meal, I think, unless of course you are a vegetarian.