No, this is not weather-related. The fact is, it's been a year since Collette died. We told ourselves we were going to wait a year before we started looking for a new dog. The new dog will still suffer the comparison with Collette, a collie-like mutt that we adopted at the Silicon Valley Humane Society in Santa Clara, California, in 1992. She lived with us for nearly 14 years, and moved with us to France at the ripe old age of 11½. 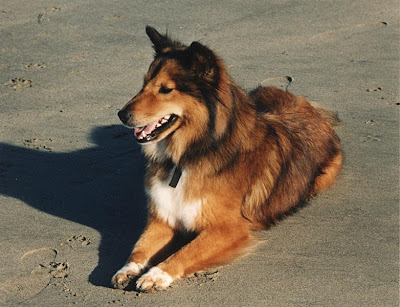 Collette on the beach at San Francisco in about 1998
About a week ago, I called the local SPA — Société Protectrice des Animaux — and asked about their hours and procedures. The woman on the phone said the facility, located about 7 miles north of Saint-Aignan, near Contres, was open to the public every afternoon except Sunday. I would need to show proof of my address (an electricity or telephone bill, for example) and a valid ID, in my case my U.S. passport and French carte de séjour, or residency permit, before they would let me adopt a dog.

Walt and I were busy all last week, spending one afternoon in Blois having lunch with friends, and another afternoon meeting with a contractor about our other current project, which is sprucing up our kitchen by painting and having a new sliding-glass window and some extra electrical outlets put in. On Friday, we finally had time to go look at the dogs available at the SPA. 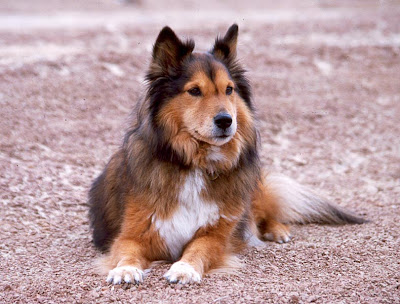 In the southern California desert in February 2001
I think we both hoped that we might find Collette there, or at least her twin — I know I did — but that didn't happen, of course.

The local SPA is very different from the Silicon Valley Humane Society, as you might imagine. The Santa Clara facility is located in the middle of the urban sprawl that runs from San Francisco south for 50 or 60 miles down to the lower sections of San José. Three or four million people live in that stretch of housing developments, shopping malls, little downtowns, and office parks. Silicon Valley is not exactly a rural area, and the Humane Society, I remember, felt like a big warehouse full of barking dogs in cages. It was really jumping that Saturday morning in July 1992 when we found Collette there.

Here, the SPA is outdoors. There's an old stone farmhouse where the offices are set up, and then there are four or five long, low outbuildings divided into separate kennels for the dogs of the moment. We were greeted by a friendly staff and told to just go have a look around. There were two kennels close in, they said, but make sure you go through the gate out to what they called les villages to see even more adoptable canines, we were told.

That's what we did. It was bright and sunny. More than half the dogs barked loudly as we walked past their box (can you say [bucks]?), as the individual cages are called in Molière's language. Some were just being territorial, but some appeared to be terrified. Completely freaked out. Vicious, even. One poor dog chased his own tail, spinning madly in circles, seemingly oblivious to our presence. Several others were 10 or even 12 years old, according to the sign on their cage. Still others hid from our prying eyes.

Personally, I saw two dogs, out of the 50 or so available, that I would have been tempted to take home with me. One was a friendly beagle that had already been spoken for. The other was a small, 9-month-old yellow Labrador, a female that was bright and friendly. There was a pile of dog poop on the floor of her box and I kept hoping she wouldn't step in it as she jumped around with joy at seeing some new humans.

That should have been my first clue that there was a problem. We went back and talked to the people in the office. A woman there said Ariane, as the Lab was named, was a good-tempered, alert dog, but she had one big problem. Nobody had yet succeeded in housebreaking her.

In French, the word for "housebroken" is propre. It also applies to children who are toilet-trained — they are propres, or "clean." That is not a term you would know unless you've had children or a puppy in France.

I learned it from reading a now-discontinued blog written by an American woman who is raising two small children in France. When the first child was ready to go to nursery school, the school authorities asked the American whether her son was propre. She was offended! "Of course my son is clean. I bathe him every day!" she thought. Afterwards, the woman's French husband explained to her what "clean" meant in the context of a toddler and a nursery school. 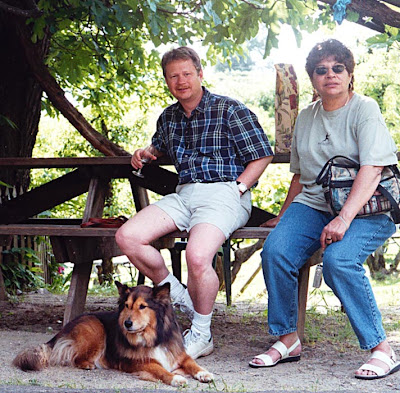 August 2002 in California with Walt and our friend Cheryl
So the little Labrador was not "clean." She had recently been adopted out to a family that kept her only a couple of weeks before deciding they couldn't deal with the mess and brought her back, we were told. Even the SPA staff couldn't train the dog; they would take her on long walks during which nothing would happen, and as soon as they put her back in her box she would poop on the floor.

But it's not hopeless, the SPA woman said. We know a trainer who deals with problem dogs and who could surely sort this behavior issue out for you. We'll give you the trainer's phone number.

We said we would have to think about it over the weekend. Along with the poop problem, I'm also worried that the little Lab would just be too rambunctious for a life as a house dog. Collette was a calm if sometimes spooky dog, and she was 95% propre when we got her. She was about six months old, and after just two or three "accidents" in the house she figured out where she was supposed to do her business and never sinned again.

Meanwhile, I started searching the web. I found sites where people place ads for dogs and puppies they want to sell or give away. But I didn't find any interesting prospects nearby. And I of course found web sites for dog breeders specializing in all sorts of dogs. 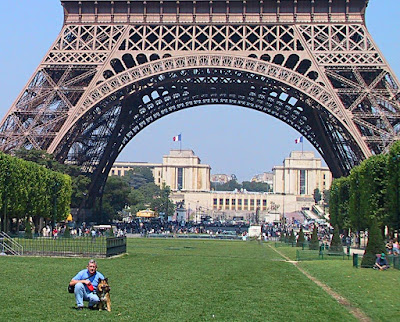 Ken and Collette at the Eiffel Tower in June 2003
One is a breeder located about two hours' drive southeast of Saint-Aignan and about 20 miles east of the town of Montluçon. Montluçon is a place Walt and I visited on a vacation back in 1995 when we were driving from Paris to Toulouse, and I've always wanted to go back and see it again. It's located near the headwaters of the Cher river, which flows by just down at the bottom of our hill.

Saturday morning I contacted the breeder, who specializes in border collies, by e-mail, and she said she had three female puppies available. They were born on February 22. I wrote back to make an appointment, and the answer back was that yes, please do come for a visit, but now there is only one female puppy left. So they are selling like petits pains — hotcakes. 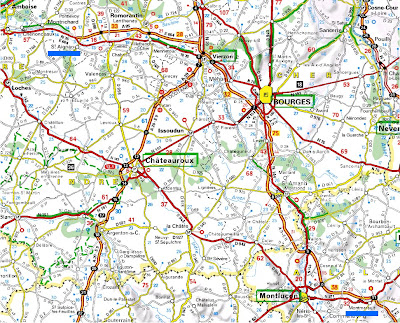 We'll be able to drive the autoroute, a toll expressway,
all the way from Saint-Aignan (upper left) past Vierzon,
Bourges, and Montluçon, down to Montmarault (lower right).
It's supposed to take two hours and the toll is 15€/20$.
We can't go today because we are having another kitchen contractor come in to do some measuring in preparation for giving us an estimate on the work we want done. And we didn't want to commit to going tomorrow because the weather forecast says we should expect snow (!) in the morning. But we plan to drive down to Montluçon and the nearby village of Montmarault on Wednesday to see what might develop. Maybe that puppy will still be available and will win our hearts.
Posted by Ken Broadhurst at 05:26