Le Mont Saint-Michel: getting there

We had an easy drive most of the way up to the Mont Saint-Michel. We left the house at 8:00 a.m. under clear skies. I expected the trip to take us about four hours, but it ended up taking five hours. For the first couple of hours, we were averaging about 75 km (45 miles) per hour. In other words, after the first two hours on the road, we were about 150 km from home. 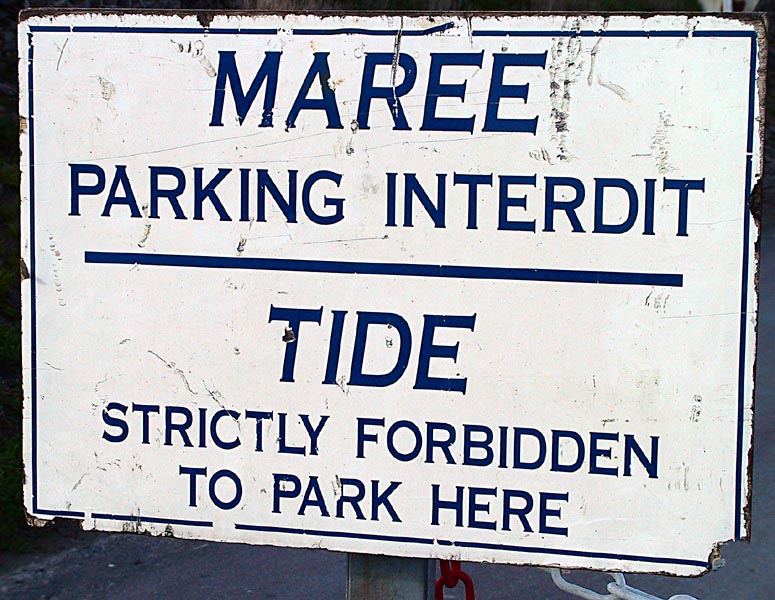 Arriving at the Mont, we were greeted by signs like this one.
Some parking areas were under water at high tide.
When you are driving on small roads (routes départementales or even routes nationales) in France, you can't go much faster than that. The speed limit is 90 kph (about 55 mph), but there are many areas where the limit is 70 kph, and in the towns and villages the speed limit is 50 kph (30 mph). You always end up driving through a lot of villages and towns on the D and N roads. It's picturesque if you're in the mood, but it is slow.

Even out in the countryside, there are quite a few big trucks on the road. In fact, trucks are a real scourge in France now, I think. It's hard to find a straight stretch where you can see around them, much less actually pass them. 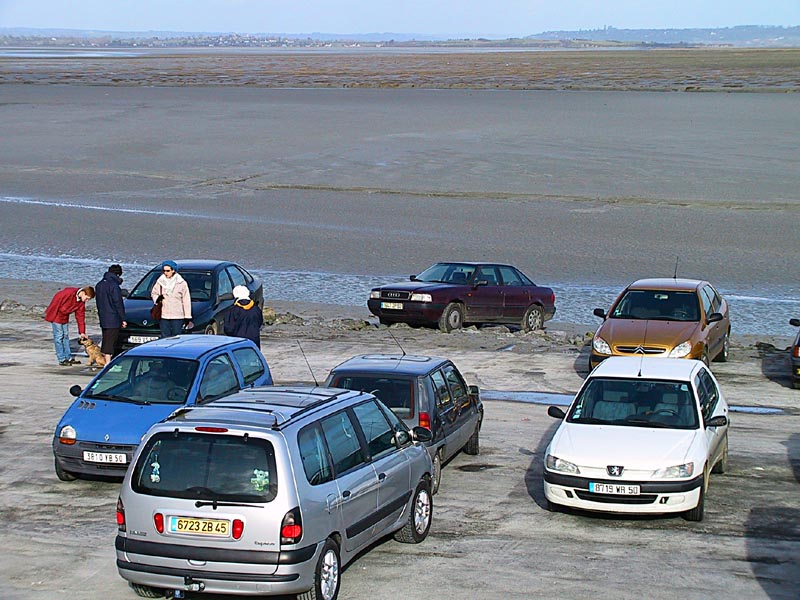 Oops! This car backed up a little too far.
It had to be towed out of the muck by a truck.
And then there's the farm equipment. Several times over the course of a half-day drive, you will find yourself behind a tractor on a narrow, curvy road. So you just toodle along in a line of cars behind the slow-moving vehicle. It can be frustrating. You have to keep a positive attitude. We were lucky that we didn't have any significant rain along the way on this trip, because that too can slow you down significantly.

Finally, the worst thing that can happen is a detour. We had been on the road for 3½ hours and had just driven through the town of Vitré, on the edge of Brittany. There's a great-looking château there, by the way, but we didn't have time to stop. We'll have to go back. 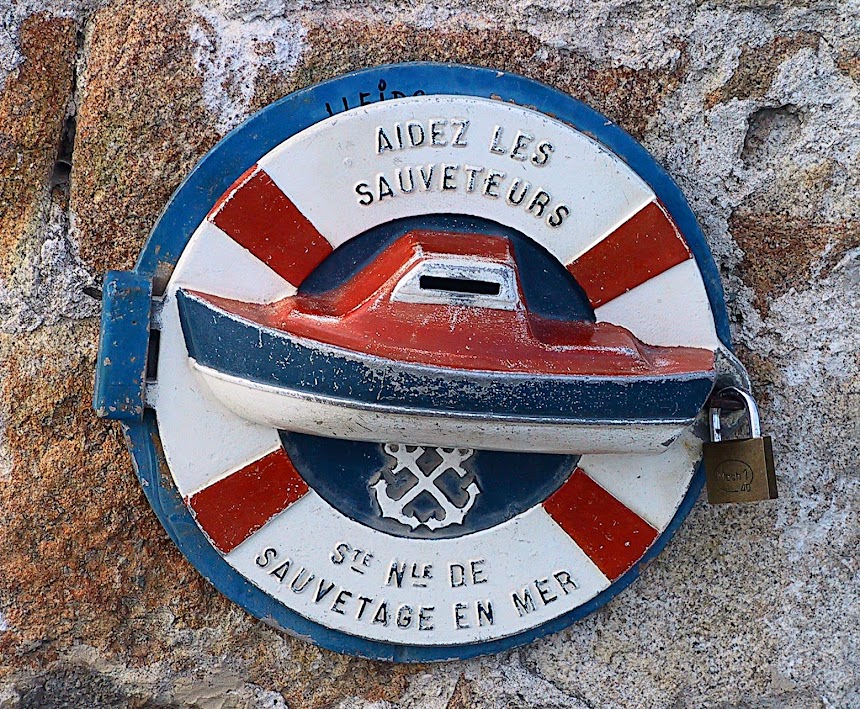 A collection box for the lifesaving service at the Mont
As we left Vitré, I said to Walt that I thought we'd be at the Mont by 12:30 or so. It would be perfect timing for the lunch we were planning to have there. Our planned route would take us along a little route départementale toward the west, farther into Britanny, and then turn straight north toward our destination. And then there it was: the dreaded yellow ROUTE BARRÉE — 5 KM sign.

The dilemma then was: what do we do? Keep going and hope for the best, or turn back and try to find an alternate route? Well, I'm a charge-ahead kind of guy when I'm at the wheel of a car, and I didn't want to turn back. There was bound to be a way through the construction or whatever else it was blocking the road. Often the route turns out not to be barrée at all because the work crew has gone off to have lunch in a local café.

In this case, the road was actually closed but there was a way through, of course. We ended up driving on unmarked, winding, narrow roads for 45 minutes or so.

These were roads that we couldn't find on our map. Just when we were about to give up hope, you came upon another yellow Déviation sign pointing the way. Then we realized they really were sending us way around our elbow to get us to our thumb, so we took matters in your own hands and struck off into uncharted territory on the faith that the little back road that went toward this or that village wouldn't turn into a gravel track a couple of miles out or end at a washed-out bridge. 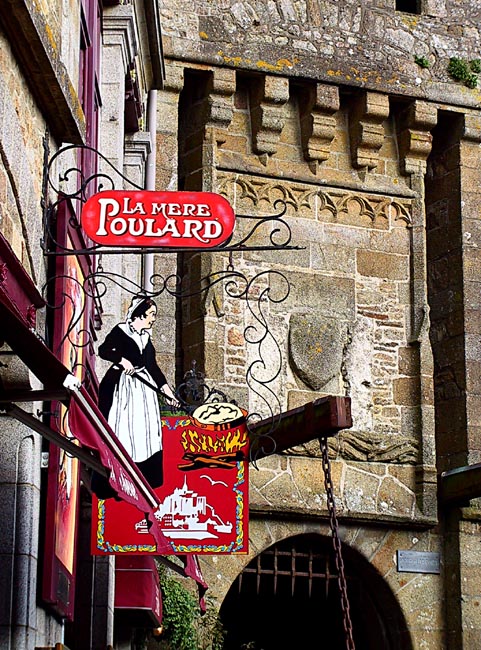 Walking up into the village at the Mont Saint-Michel
As I said, we did end up spending only 45 minutes lost out in the wilds of rural Brittany. We turned off the marked detour at Saint-Christophe-des-Bois and made it to Mecé without incident. The little Peugeot was just bouncing along on the rough pavement of the winding country lanes when, horror of horrors, just after the hamlet called La Sauqueretière a huge tractor, wider than the roadway itself, pulled out of a farmyard right in front of us.

Merde, I thought, now we are in for an interminably long crawl for who-knows-how-many kilometers. Kiss that Mont Saint-Michel lunch goodbye. And then a miracle: after less that one kilometer (felt like 10 minutes), the monster tractor turned off onto a dirt road and the way was clear in front of us. 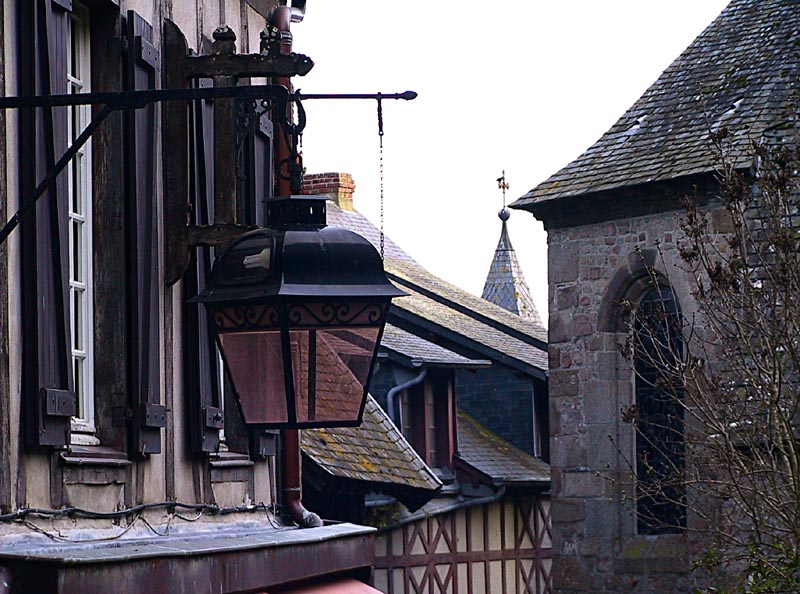 A jumble of rooftops over the streets of the Mont Saint-Michel
A few miles farther on, we ended up turning onto a stretch of autoroute (freeway, actually). We hadn't planned to take the autoroute, because it was less direct than the little roads, but it suddenly seemed like a good idea. It was bound to be faster. The speed limit on it was 130 kph (80 mph). And faster it was too: we were on the Mont by 1:00 p.m., sitting in a restaurant ordering our lunch.
Posted by Ken Broadhurst at 08:48