After we sorted out the parking situation and made sure our car wouldn't end up under water overnight, we were free to climb around in the village all afternoon. As I said, we did the rounds several times. That involved climbing a lot of stairs, but no pushing and shoving as we had experienced last summer. 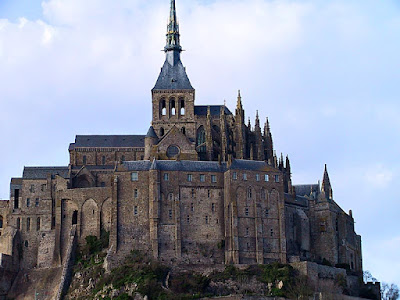 The St-Michel abbey church seen from below
What we really wanted to see was the arrival of the high tide. We kept moving from vantage point to vantage point and peering off into the distance to see if we could see the seawater coming in. They say it rolls in with the speed of un cheval au galop — a galloping horse. 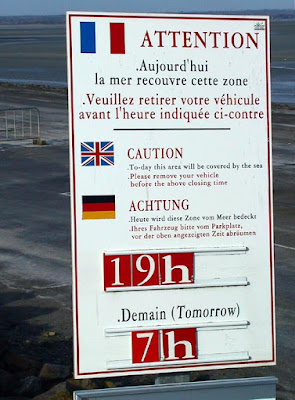 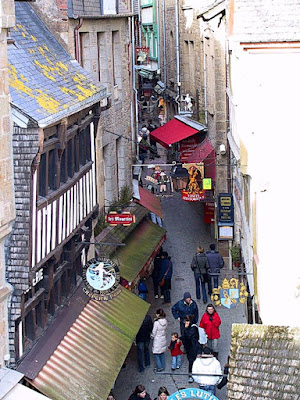 A view down into the main street in the village
After making the rounds three or four times, I suggested that we go out for a walk out along the causeway, just for the views. The sun was shining intermittently through scattered clouds, so patterns of light on the Mont and the church at the top might be photogenic. 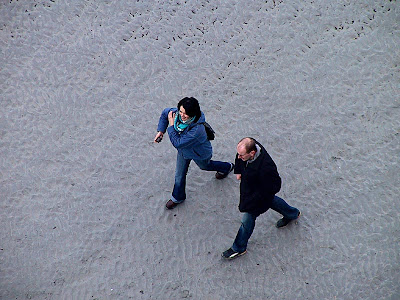 People walking on the mudflat just below the village ramparts
We had decided that while it might be fun to walk out onto the mudflats at the base of the Mont, we didn't really have appropriate footwear for such an excursion. Some people were walking around the base, near what would become the shoreline at high tide, and several groups of students were on a guided tour farther out on the flats. Patches of quicksand are a danger out there.

Click on the picture to enlarge it and you'll see that
one girl is stuck in quicksand up to her thighs.
The guides are working to free her from the muck.
The views were nice, and we ourselves ended up walking in mud after all. And boy was it slippery. Since there was no sign of a rising tide, we stepped down off the raised causeway onto a footpath the runs along the channel formed by the local river called the Couesnon (pronounced [kway-NAWn]). Walking on the footpath was almost like walking on slick ice. Luckily there was some grass along the path that wasn't so slippery. 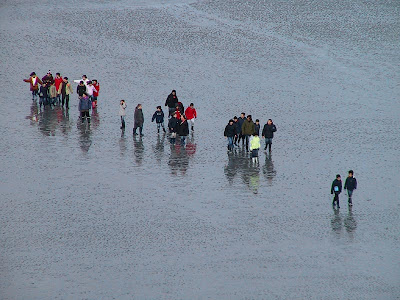 Another group of students coming in after a walk on the flats
One poor Japanese kid had apparently slipped and fallen into the mud. He was trying to dry his mud-covered clothes and scrape the dried mud off his jeans and parka as a friend watched. I assume he was a day-tripper and didn't have a change of clothes with him. He seemed to working very patiently to get cleaned up. In combination, the bright sunshine and the stiff breeze that was blowing were working to dry his clothes out pretty fast. 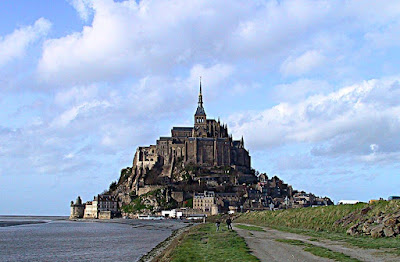 Click the picture to enlarge it and you'll see the young man
on the footpath trying to get the mud off his clothes.
By now it was about 5:00 p.m. We decided to go have a glass of wine. We tried to find a place with a view out over the flats — we didn't want to miss the spectacle of the tide flooding in — but we didn't find one. We ended up at the Vieille Auberge, which has an outdoor seating area with nice views of skies and the town across the way, Avranches. But from where we were sitting we couldn't really see the flats below. 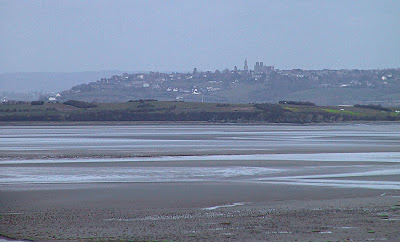 The steeples and towers of the town of Avranches
viewed from across the flats at the Mont
We had a water experience of another kind: it started raining just as we sat down and the waiter brought our glasses and carafe. It was a light drizzle, so we toughed it out. One dark cloud blew over, and there was a break in the misty rain. Then another dark cloud came over, and it started really raining. By then we had finished our glasses of white wine and we were ready to go back to our room to rest up and get ready for dinner.

We took one more walk out to the ramparts, and there was still no sign that the tide was really going to come in and surround the Mont. Maybe the rainwater added to the seawater would help.