So Peter Hertzmann and I were both bothered by the oysters we ate at the Cheval Blanc. Oysters contaminated with Vibrio bacteria look, smell, and taste perfectly good. You just never know. It's the same with salad greens, cheeses, pâtés, and many other foods. Hamburgers. Chicken. Oh well. Such is life. Eating only well-done foods is kind of boring. 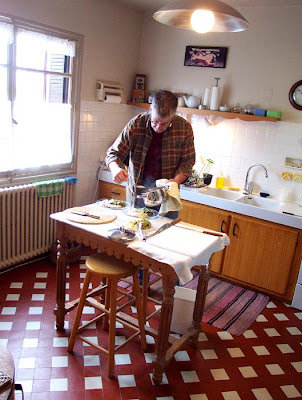 Peter Hertzmann cooking in our kitchen at La Renaudière
Do take a look at Peter's A la carte web site. It's a veritable compendium of French food history, esoterica, cooking techniques, and recipes. His latest entry is about fromage de tête, or head cheese. You won't find that on many web sites.

Last Sunday, Peter cooked chicken breasts with a sauce Robert for lunch, accompanied by green beans cooked with a little diced tomato, onion, and garlic. He started the chicken in a pan on top of the stove and after it had browned on one side he finished the cooking in a hot oven for five or six minutes. 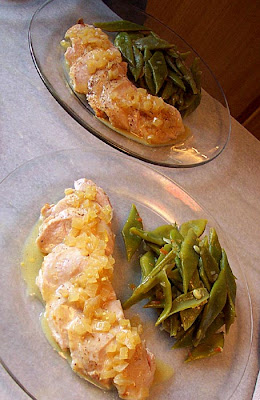 Cooking green beans — in this case flat green beans, which looked so good at the supermarket I had to buy them — with tomato and onion is one of my favorite ways to do them. The recipe I use calls them haricots verts à l'italienne — Italian style. 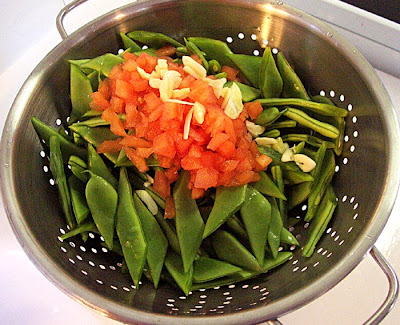 Green beans with tomatoes, onion, and garlic, ready to be cooked
At the Saturday market in Saint-Aignan, I had found some crosnes, which Walt had been wanting to try for a while. Peter found some nice Brussels sprouts. Then we bought some of Mme Doudouille's good saucisses aveyronnaises -- pork sausages from the area called l'Aveyron in south-central France. That was dinner. 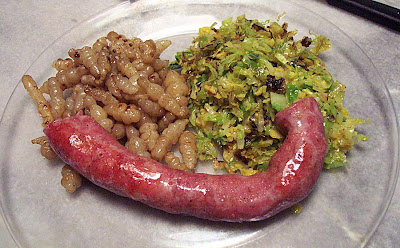 Crosnes, choux de Bruxelles, et saucisses aveyronnaises
Peter shredded the sprouts before cooking them in a pan with butter. He did the shredding with a knife, not a mandolin or food processor, and it was a time-consuming process but the result was very good. 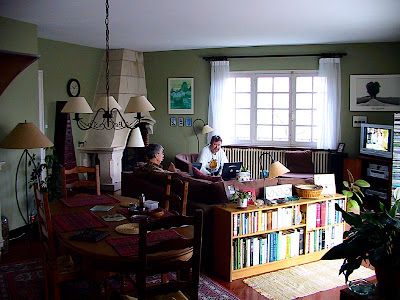