It snowed up north of us in Normandy and down south of us in Auvergne where the elevation is higher. That's what I heard on the radio this morning. Here, you can't exactly say it snowed, but it is cold today and there is a very light frosting of snow on the grass, hedges, and outdoor garden objects. Walt just noticed that we are having a snow flurry right now. 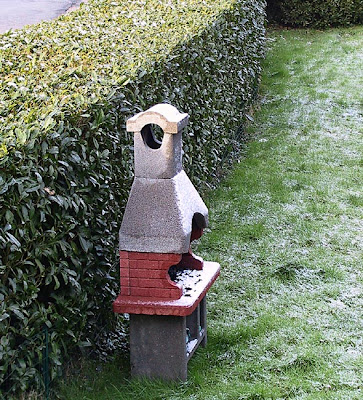 Ice on the barbecue grill out in the back yard (20 March 2007)
Today is the last full day of the '06-'07 winter. Spring starts tomorrow. But in French they say April can be cold — don't put on your summer clothes yet ( en avril, ne te découvre pas d'un fil).

There are signs of springtime, as you can see in these pictures. The weeping ornamental cherry tree in the side yard has been in flower for more than a week. The daffodils, hyacinths, forsythia, and primroses are in bloom. But it's cold enough for ducks (il fait un froid de canard) this morning. 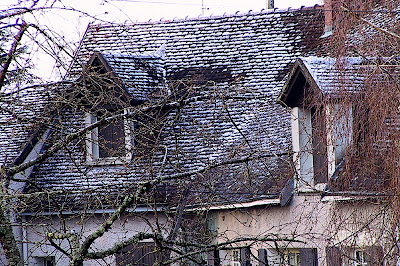 The roof of the neighbors' house this morning
The anouncement of the official candidates for the French presidential election was made yesterday afternoon. There are 12 of them. More than 40 wanted to run, but only 12 got the necessary 500 "sponsorships" from qualified elected officials. Four of the twelve are women, and eight are men.

Five candidates are representatives of the anti-libéral far left, including the head of the French Communist Party, three Trotskyites, and the environmental, anti-globalization activist José Bové. 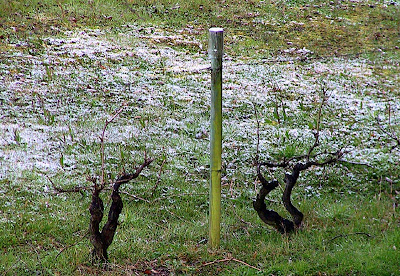 Grapes in the back yard — no leaves yet
Another candidate represents the French Green Party.

Three of the candidates are on the extreme right. The best known is Jean-Marie Le Pen of the Front National, who once described the Holocaust as "a detail of history." Another is an anti-Europe activist who has extremely traditional views on social issues, and the third represents the French Hunters and Fishermen party. 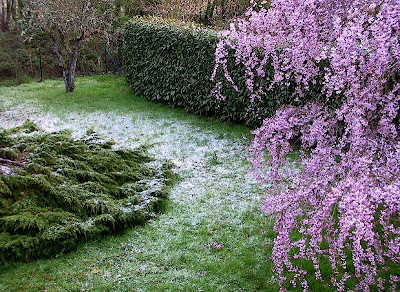 Frosty flowers on the cherry tree, which
produces a lot of flowers but no cherries
The three candidates who will likely get the largest numbers of votes are socialist Ségolène Royal, centrist François Bayrou, and current rightest government minister Nicolas Sarkozy. These three and Le Pen together will probably get 75 to 80% of the total vote in the first round of the election on April 22. The two top vote-getters will face each other in a run-off on May 6.

All the candidates get equal time on French TV and radio starting today.


A sample of this morning's weather in our back yard

For me, it's time to go to Intermarché. They have cauliflower on special this week. Also pork chops.
Posted by Ken Broadhurst at 08:33