The United States still had military bases in France. World War II had ended less than 10 years earlier. De Gaulle finally closed down the U.S. bases in the 1960s and all the Americans came home, or were "re-deployed." France no longer wanted to be occupied.

Before the bases closed down, a man from my home town was stationed in France and married a young French woman. When he was discharged from the service, he and his wife, Colette, went to live in the small town where I grew up in North Carolina.

Colette and her husband had two daughters. The older girl, Patricia, might have been born in France. The younger one, Debbie, must have been born after the move to N.C. Patricia was several years younger than I was.

I remember knowing that Colette was from Verdun, in France. That meant something to all of us, because my Uncle Henderson (that's what we called him, though his first name was Rudolph) had been in the Army during World War I and had fought at Verdun. We knew that there had been a fierce battle there. That was exotic and exciting.

And then Colette and her husband separated, as often happens with bi-cultural couples. I'm not really sure how long she had been in N.C. at that point, or how long she lived there in all. Not very long, I think. 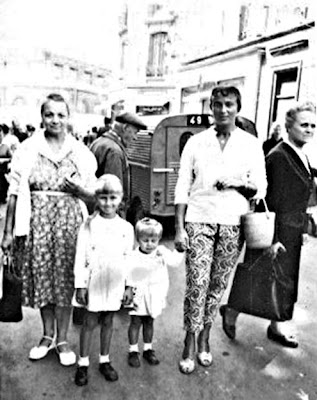 A picture Colette sent us after she moved back to France.
This is her with her mother and her daughters,
in the late '50s or early '60s.
When she was "single" again, Colette became good friends with my mother's younger sister, who was also single and in her 20s. They spent a lot of time together, going to the beach and double-dating, my aunt says. Colette also became friends with my mother. My sister and I got to know the French woman and her little girls.

Colette spoke French to her daughters. I think the girls spoke English too, but it's hard to remember. I was fascinated with the fact that they spoke a language other than English. I got it into my head that I had to go to France one day.

Then, just a few years later, Colette went back to France and took her daughters with her.

When I started high school in the mid-60s, I had to choose between taking French classes or taking Spanish classes. French was a four-year program, but Spanish was limited to two years. I wanted to go to college (there were language requirements for admission back then) and I wanted to go to France, so I chose the four-year French program.

I was good at it. French was fairly easy for me. My mother said I inherited the interest and ability from one of my father's Huguenot ancestors. I wasn't embarrassed to try to make the funny sounds and lip movements required by French because I knew that it was really spoken that way by real people. Starting at age 14, then, France and French became an integral part of my life.

I didn't actually get a chance to go to France for the first time until I was in college, but I was determined that one day I would. That was 37 years ago. I spent a semester in Aix-en-Provence in 1970 and it was everything — more — than I had thought it would be. Something really "clicked" in my brain that semester, and really started speaking French. The sound and the rhythm of the language became real to me. My accent was good. I needed to be in France.

I ended up living in France — mostly in Paris, but also a year in Rouen, in Normandy — for about 8 years as a young man, working as a teacher. I like to say I grew up twice — once in America as a child, and again in France when I was in my 20s.

When I was in my mid-30s, I worked as a French-English translator in Washington DC. It was as close to living in France as you could get without living there. All my colleagues were French (well, francophone) and I spoke French every day at work. My French got better, and I learned more from the man who hired me for that job than I had ever learned from anyone. He is a good friend still.

Then I moved to California in the mid-'80s. I felt a little cut off from so many things I loved. I thought San Francisco would feel like Paris, but it didn't. They didn't speak French there, after all. I loved it anyway, for other reasons, but not enough to forget France.

By 1988 I started coming to France as often as I could wrangle some vacation time out of my managers and employers. I'm sure I have flown across the Atlantic close to 50 times in my life. Finally, in 2003 I quit my job in California and relocated myself "permanently" to the Loire Valley. (It is always a good idea to put the word "permanently" in quotes, don't you think?)

All thanks, on some level, to Colette, Patricia, and Debbie. And to some good teachers, professors, and editors, as well as some good friends in France.

* * * * *
After writing this yesterday, I looked at the French phone directory on the Internet and found an address and phone number for someone who might well be Colette's daughter Debbie. The last name is right, and the first name is spelled Debi. This person lives in the part of France where we last heard that Colette was living (but that was 35 years ago).

Now I wonder if I am going to call this Debi person. I know my mother and aunt would love to hear that Colette is still living and let her know that they still think of her. Then again, she would be in her middle to late 70s, so maybe she is deceased.

Debbie (or Debi) must be about 50 years old now. She was such a little girl when they left N.C. that I'm sure she won't know who I am at all. But her father and paternal grandparents stayed in North Carolina, after all, and she must at least have known about them as she was growing up. When I say North Carolina, she will perk up if she is the same Debbie. Should I call her?
Posted by Ken Broadhurst at 15:22