Weekend of restaurants and food

We have a visitor from California this weekend. His name is Peter Hertzmann, and he's an expert cook and a grand amateur (enthusiast, lover) of French cuisine. Here's a link to Peter's web site, which is a treasure trove of recipes, food ideas, and cooking techniques.

Ironically, since he arrived, instead of cooking we have been out to restaurants for two meals so far. The first was kind of a bust. We wanted to go to a restaurant in Saint-Aignan called Le Crêpiot Thursday night after Peter came in on the 7:30 train. But the Crêpiot is closed until March 14. The owners are taking a vacation. 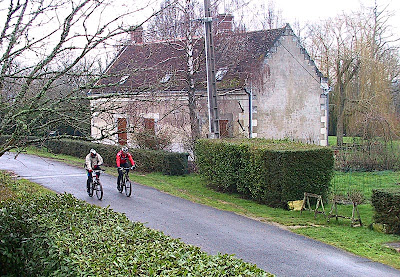 Cycling on a damp February morning at La Renaudière
The idea was to eat something simple — what they call une grillade in French — a steak or some other grilled cut of meat, with a salad or French fries or both, for example. We ended up at a place called La Taille Rouge in the village of Couddes, 6 or 8 miles north of Saint-Aignan. Walt and I had driven by the place innumerable times and always thought we would stop for a meal. It's on the main road linking Saint-Aignan to Blois. It advertises itself as a grill — a place that would serve grillades.

When we got there, the place was totally empty. There was a big fire burning in the fireplace (even though it was not cold outside) and it must have been in our honor, since we turned out to be the only customers for the entire evening. The food -- a mixed salad as an entrée, then a piece of onglet (hanger or skirt steak in English) for Peter and me and a bavette (flank steak) for Walt — was acceptable (correct in French) but not outstanding.

Walt's flank steak was cooked on a grill in the fireplace. The skirt steaks were not grilled but pan-fried. I thought the home-style potatoes served with the meat were good, and we drank a bottle of Chinon red from Cravant-les-Côteaux. It was a quiet evening, and it is always a little sad and disconcerting to have a big restaurant all to yourself on a winter evening.

Yesterday we went to the restaurant I call "the truck stop" for lunch. It's official name is Le Grill des Nouettes and it's located next to the cemetery on the main street in the town of Noyers-sur-Cher, right across the river from Saint-Aignan. I've eaten at the truck stop half a dozen times and have always enjoyed the food. Yesterday the place really lived up to its name. 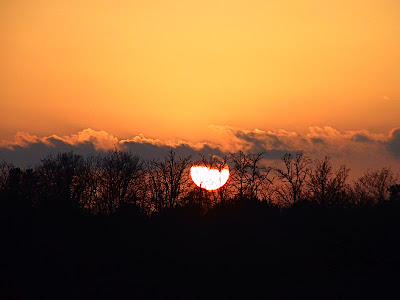 La Renaudière sunset, 22 February 2007
One friend from California said the Grill des Nouettes reminded her more of a midwestern church supper hall than a truck stop on the day we had lunch there, and she was right about the atmosphere that day. Yesterday, however, the place was packed with truck drivers and the big gravel parking lot out front was occupied by half a dozen big-rigs, plenty of little white vans (the kind used by local contractors and vineyard workers), and a dozen or so cars. Inside the restaurant there were a couple of dozen tables taken by groups of working men. And there were maybe half a dozen women diners in all.

When we walked in, the woman who runs the place called us into the bar next to the dining room and asked us if we all three wanted the daily special. We did. She had us pay up front, and asked if we would want coffee after lunch. We said we would. We paid our 36.30 € (about $15 per person) and she gave us a little red laminated card that was a token good for a cup of coffee. She said to show the server our receipt as proof that we had paid for the lunch special.

The Grill des Nouettes features an all-you-can-eat salad or hors-d'œuvre bar (un buffet) and the lunch special includes that plus a main dish (either meat or fish) and then cheese and dessert. Unlimited wine is also included in the price.

The owner seated us and told us to go serve ourselves at the salad bar. There we found vegetable salads (leeks in vinaigrette, for example, along with sliced boiled potatoes, sliced tomatoes, lettuce, beets, and grated carrots) and pâtés, rillettes and rillons, along with pickled herring, boiled eggs, and a big bowl of mayonnaise. There were sliced sausages and even big chunks of black pudding (blood sausage or boudin noir). It was easy to fill up a plate with nice little appetizers. It's all pretty rustic, but, well... appetizing. 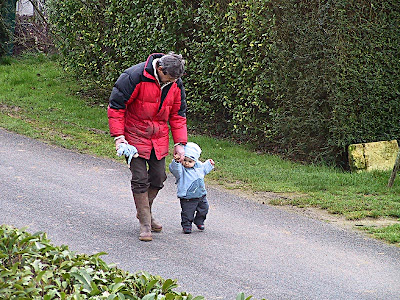 Neighbor Jean-Michel walking
one of his grandchildren along our road
The main courses proposed yesterday were fillets of white fish in a cream sauce or pork ribs in a red sauce. We all three had the pork ribs, which were served with a mix of vegetables — broccoli, cauliflower, and carrots. The vegetables were sadly overcooked, and downright mushy, but the pork was good and the sauce was tasty. At the truck stop, red wine is served out of the jug or barrel in a quart-size glass carafe. It's a local "vintage" I'm sure, and it's drinkable.

The plate of cheeses that the waiter brought to the table when we finished our main course included a big piece of blue (probably bleu d'Auvergne), a chunk of what might have been coulommiers, and another that was probably Port-Salut, plus a log of goat cheese. Something for everybody, in other words. I noticed that the cheese platters were left sitting up by the salad bar at that point. The waiter didn't leave ours on our table very long, but we could always go up to the salad bar and get more if we wanted it.

For dessert, Peter and I asked for fresh fruit, and the waiter brought us a big bowl of bananas, oranges, tangerines, pears, and apples. He left it on the table. I noticed guys leaving the restaurant with a piece of fruit in hand — an afternoon snack, I guess. Walt had a choux à la crème for dessert. That sounds like cabbage, but it's actually a cream puff filled with whipped cream. He said it was good — not sickly sweet, and very tasty.

That was it. Coffee, of course. I still think the truck stop is a good place to have lunch. Great atmosphere.

Last night Peter cooked. He had brought us two nice duck breast fillets from the Dordogne when he came, and he cooked those by searing them in a pan on the stove and then putting them in a hot oven for five or six minutes. He then took them out of the oven and let them rest, covered with foil and and a kitchen towel, so that they heat would spread through the meat and finish the cooking evenly. The duck was pink and cooked through but not overcooked or dry. 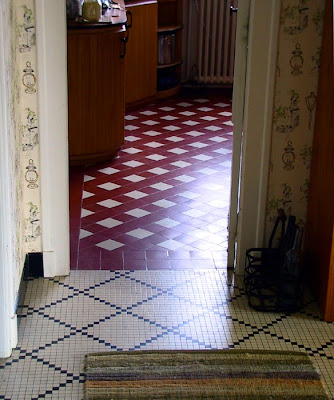 Typical tile floors in our French house
While the duck breasts rested, Peter made a cream sauce with crème fraîche, a reduced duck stock (which he had made during the afternoon using a duck carcass, a chicken carcass, onions, leeks, carrots, herbs, and black peppercorns), and as a seasoning some chopped green peppercorns that we had in the refrigerator.

He also made a sauté or stir fry of vegetables: sliced onions and julienned carrots, red bell peppers, and zucchini. The vegetables were cooked quickly on high heat so that they caramelized a little in the pan but stayed slightly crunchy and crispy. Delicious. Nothing like the mushy truck stop veggies.

So up to now, the best meal we've had since Peter got here is the one he cooked in our kitchen last night. I don't think our knives are up to his standards, and our pots and pans are just adequate, but he didn't let any of that stop him from producing an excellent meal. Walt took some pictures and will be posting them on his blog, I'm sure.

Tonight we have reserved a table for dinner at a Michelin one-star restaurant called Le Cheval Blanc, which is in the town of Bléré. That's just on the other side of Chenonceaux, about 18 miles from Saint-Aignan on the Cher river. More on that experience tomorrow or Monday.
Posted by Ken Broadhurst at 08:37