My mother just "celebrated" (c'est le terme consacré) her umpteenth birthday, and I will be observing my énième anniversaire (French for the same expression — it's number "N") in a couple of weeks. That has gotten me to thinking about family.

I was nosing around in the files on my hard disk this morning (so much stuff!), and came upon a batch of old pictures I scanned about 10 years ago. 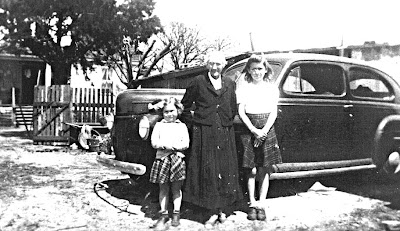 Ann, Aunt Liz, and Mary Allen (my mother) in the early 1940s
My mother was brought up during her adolescent and teen years in large part by her great Aunt Elizabeth, known as Aunt Liz or "Ear" (for reasons that have never been clear to me). Aunt Liz was 88 years old when she died in 1948. That means she was born in 1860. As the Civil War began.

Ear was my mother's grandmother's sister, I believe. They say she smoked a pipe, and what she smoked in it was not always tobacco! She died about a year before my birth, so I never knew her, but I feel like I did. 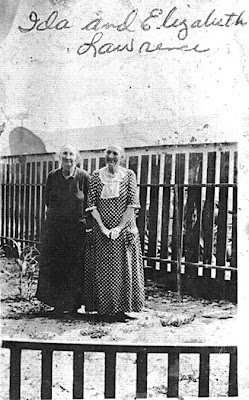 Ida was one of my great-grandmothers,
and her sister Elizabeth was Aunt Liz.
My mother's father had died when she was nine years old and her little sister, Ann, was just three years old. So I never knew him. He lived to be just 39 and was born around 1900. 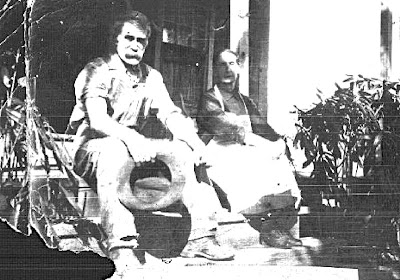 Ben and Ida, my great-grandparents, on their front porch
in our little town on the coast of North Carolina
After her husband's death, my grandmother's health declined rapidly. She was only in her 30s but she was no longer able to take care of her children. At that point my mother and aunt were taken care of by a great-uncle. It was a responsibility he shared with his wife and his Aunt Liz. He was called Uncle Gene, or just "Uncle," and he was virtually a grandfather to me. 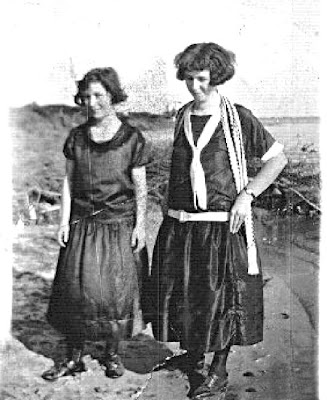 My grandmother (l.) and a cousin of hers
in about 1923. Her name was
Mary Daniels Willis — "Mary D."
My grandmother, Mary D. as they called her, died one month after I was born, so I never knew her either. I just know stories.

Uncle Gene and his wife, Aunt Ethel, had five children themselves. Their children were all about 10 years older than my mother, and they were already setting out on their own when Gene and Ethel "adopted" their niece Mary D. and her children — my grandmother, my mother, and my aunt. All of Uncle Gene's and Aunt Ethel's children, who were like aunts and uncles to me, have passed on now. 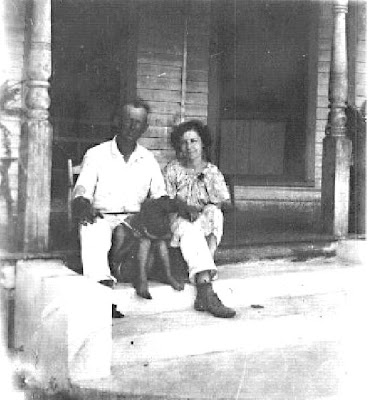 Joe Miller and Mary D. on the front porch of their house
in South Carolina, where my mother (also in the picture) was born
at the beginning of the Great Depression. Photo from about 1934.
My grandfather, died at home of peritonitis caused by a burst appendix, by the way. He was a young man still. He didn't want to go to the doctor, they say. He was sure he would just get better. 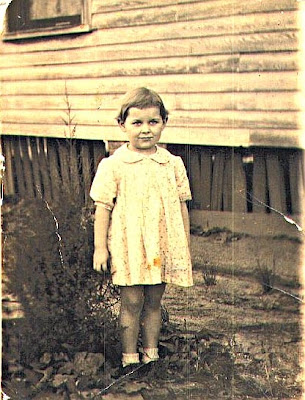 My mother at about age 5 in South Carolina,
during the Depression
All this petit monde ("this crowd" is the expression we would use in our N.C. dialect) lived out their lives in the first half of the 20th century in a town of about 3,000 souls on an isolated section of the North Carolina coast. The family has lived there since the 1780s. I was born before 1950, so my life started there in the first half of the 20th century too.
Posted by Ken Broadhurst at 10:52