Yesterday I cooked something nobody in eastern North Carolina, where I grew up, would ever think of cooking or eating. It's lamb barbecue. Not many people there eat lamb, unless things have really changed. Pork barbecue is the rule. 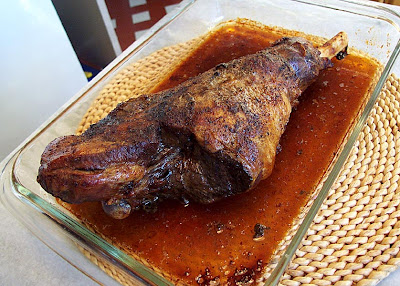 A slow-cooking leg of New Zealand lamb basted liberally with an
eastern North Carolina-style, vinegar-based barbecue sauce
This meal really is an example of globalization. The leg of lamb is one that I bought, frozen, at the Ed grocery store in Saint-Aignan. It was imported from New Zealand, and the price was less than 10 euros. I've paid from 30 to 40 euros for a good leg of French-raised lamb.

I figured the frozen leg of lamb wouldn't be a good as a fresh French one, so it would be more appropriate to slow-cook it rather than eat it rare the way you would a fine gigot d'agneau. I cooked the New Zealand gigot for about six hours at low temperature. 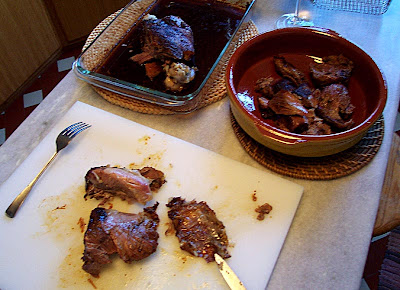 When it's done, you take the lamb off the bone while it's still hot.
For side dishes we cooked frozen French fries (French or Belgian), made a slaw of grated celery root in vinaigrette (all French ingredients) to serve with local lettuce, and also made and cooked hushpuppies using cornmeal that I bought in, and carried back from, North Carolina last year. 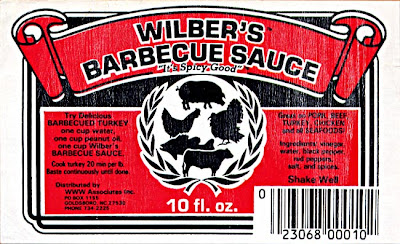 "Imported" barbecue sauce. Ingredients: vinegar, water, black
pepper, red peppers, salt, and spices. No sugar or ketchup.
The barbecue sauce comes from a famous restaurant called Wilber's Barbecue, located in Goldsboro, N.C. I bought a case of the sauce there in the late 1990s, took it to San Francisco, used some, and then shipped the rest to France when we moved to the Loire Valley in 2003. And because I was cooking indoors and not over a wood fire, I added a few drops of liquid hickory smoke to the marinade/basting sauce.

In North Carolina, barbecued meat is generally served with French fries (or potato salad), cole slaw, and hushpuppies. In other places, I understand, people eat hushpuppies only with seafood. In N.C., we have them with barbecue AND with seafood. 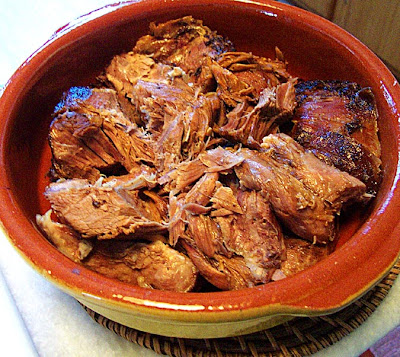 "Pulled lamb" — while the meat is hot, you "pull" it into rough pieces
with your fingers or a couple of forks and then season it with
some of the pan drippings plus a little more hot vinegar sauce.
In France of course, nobody ever heard of hushpuppies. Even in New York state, people aren't sure what they are. For the record, they are bread. And you don't eat them with ketchup. Butter, if you want, but that's probably not so good for your health.

I got the idea for lamb barbecue from our trip through Kentucky last fall. I'm improving (I hope) on the very good barbecued mutton we ate at the Moonlite Inn in Owensboro, Kentucky, an Ohio River town near Evansville, Indiana. Grazing and raising sheep used to be a big industry there, it seems, so barbecued lamb and mutton were a natural by-product. 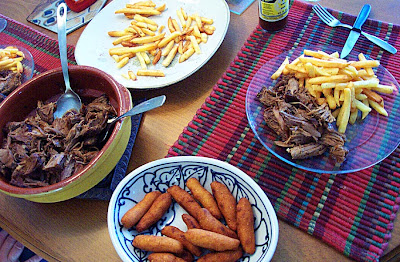 À table ! — Come and get it!
The Moonlite Inn is renowned for its barbecued mutton. Walt and I ate lunch there. The restaurant seats 350 people, so it is not a hole-in-the-wall establishment. The only thing I didn't think was fabulous about the food was the barbecue sauce, which was kind of wimpy to my taste. The meat and side dishes were excellent, however.

Barbecued lamb is of course something people eat a lot in France and in North Africa (Morocco, Algeria, etc.), though not basted with a vinegar/red-pepper sauce. A barbecued lamb is called a méchoui. Some friends of ours in the village had a cookout a couple of summers ago and cooked lamb on a spit. It was fantastic. 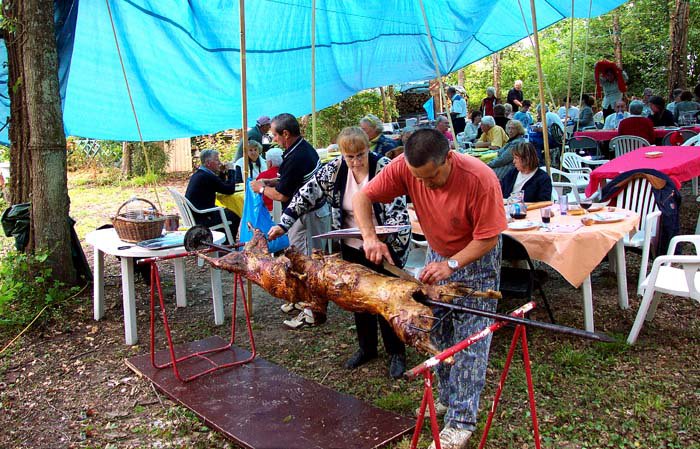 A méchoui (a cookout featuring spit roasted lamb)
in our village in July 2005. The hosts raised the lamb themselves.
There's a great couscous restaurant on rue Mademoiselle in the 15th arrondissement in Paris called Le Vent de Sable. There you can eat succulent barbecued lamb méchoui served with couscous, a big pot of vegetables in a spicy broth, and some hot merguez sausages. Try it next time you are there.
Posted by Ken Broadhurst at 09:28