« Pièces de poulet panées et frites »There's a lot of virtual ink being spilled on the subject of fried chicken these days. The term I've used as a subtitle, by the way, is what the Kentucky Fried Chicken chain calls its principal product in France. There are a few KFC restaurants in the Paris area, but none within a hundred miles of Saint-Aignan. 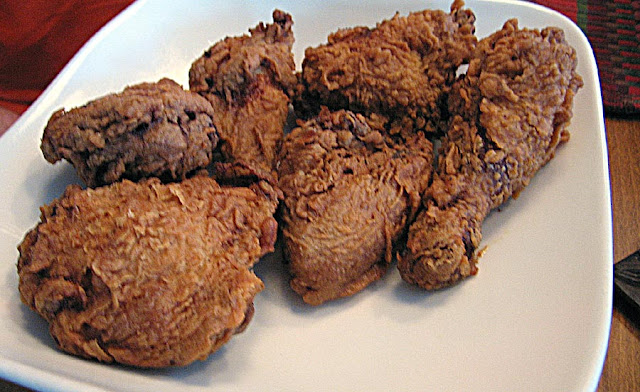 Last week there was a New York Times article about Korean fried chicken (you may need to log in to read it) that said Korean joints making fried chicken are springing up all around New York. It's giving a whole new meaning to the TLA (three-letter acronym) that is KFC. The Times says:


"For crunch, American-style fried chicken relies on a thick, well-seasoned crust, often made even thicker by soaking the chicken pieces beforehand in buttermilk. When that crust is nubbly and evenly browned, and the chicken meat is cooked through, the chicken is sublime. But too often, the flesh is still raw when the crust is cooked, or the skin never cooks all the way through, leaving a flabby layer of skin between the meat and the crust.

"Korean-style fried chicken is radically different, reflecting an Asian frying technique that renders out the fat in the skin, transforming it into a thin, crackly and almost transparent crust. (Chinese cooks call this “paper fried chicken.”) The chicken is unseasoned, barely dredged in very fine flour and then dipped into a thin batter before going into the fryer. The oil temperature is a relatively low 350 degrees, and the chicken is cooked in two separate stages." 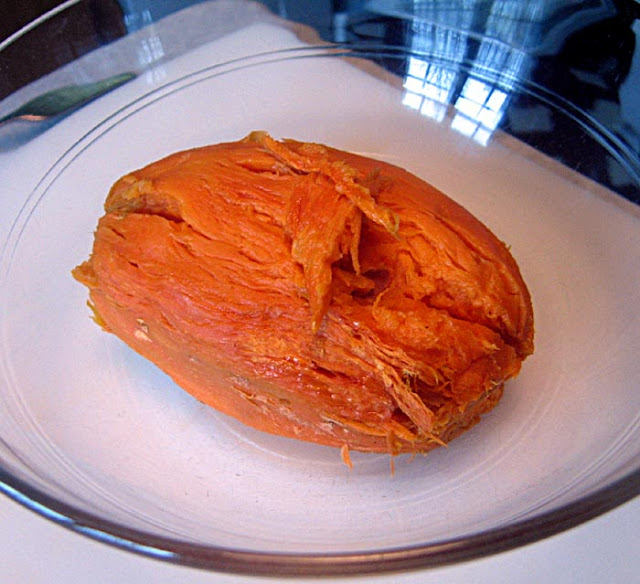 I wonder if they eat baked sweet potatoes
with their fried chicken in Korea.

Coincidentally, about 10 days ago I decided to make fried chicken. I wanted something American, and something I hadn't made or eaten in a long time. Southern fried chicken fit the bill. We used to eat it often for Sunday dinner when I was growing up in North Carolina. 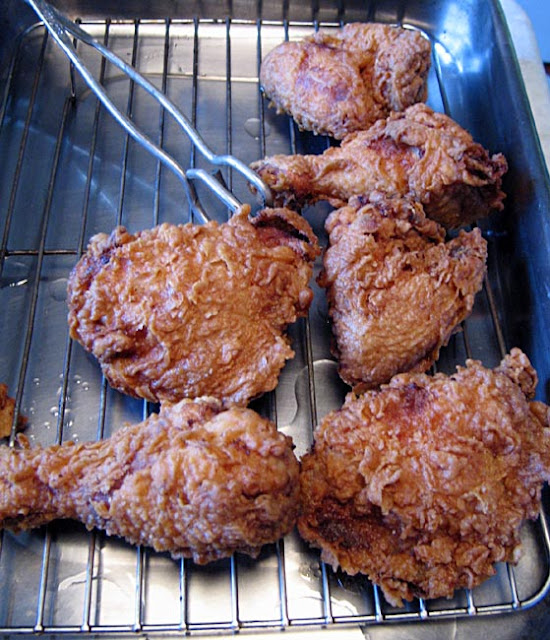 I've never been one to enjoy or eat often in fried chicken restaurants in the U.S., however. KFC, Popeye's, and Church's always left me cold. Too salty, too greasy. In fact, for years I was horrified by the whole idea of breaded, deep-fried chicken. They didn't eat such things in France, so I wouldn't eat them either. Give me a good, plain oven-roasted chicken any day.

Fried chicken is still not a French menu item, even though a lot of people nowadays have tasted fried chicken or chicken nuggets in fast-food restaurants. 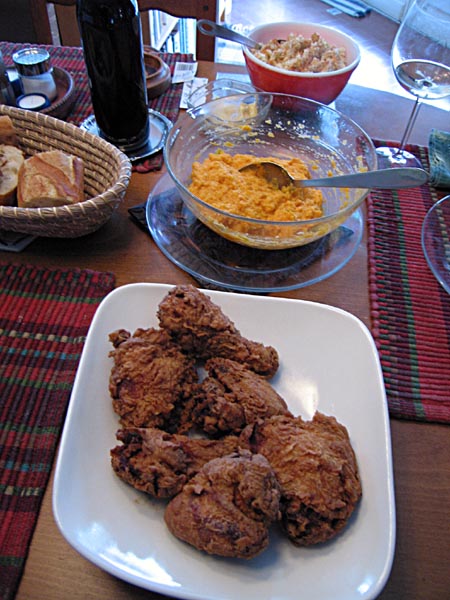 Actually, what inspired me to want to try to make fried chicken, I just remembered, was an article in the San Francisco Chronicle's food section on January 17 saying that fried chicken is the new "in" food in a bunch of Bay Area restaurants.

I read the SF Chron article and printed out the various recipes, or methods, for making fried chicken, which went from the extremely simple to the fairly complicated.

Then I got out five or six Southern cookbooks, as well as the Joy of Cooking, and read everything they had to say about Southern fried chicken. Cooking Across the South, Southern Food, Classical Southern Cooking, The Georgia Sampler Cookbook, The American Regional Cookbook, The Dictionary of American Food and Drink — those are the titles of some of the books that have ended up on my shelves over the past 30 years.

I decided that one of the keys to good Southern fried chicken was buttermilk. Problem is, it's almost impossible to get buttermilk in France. It's called babeurre, and it's definitely a specialty product. What is buttermilk? It's the liquid left over when you churn milk into butter, isn't it? 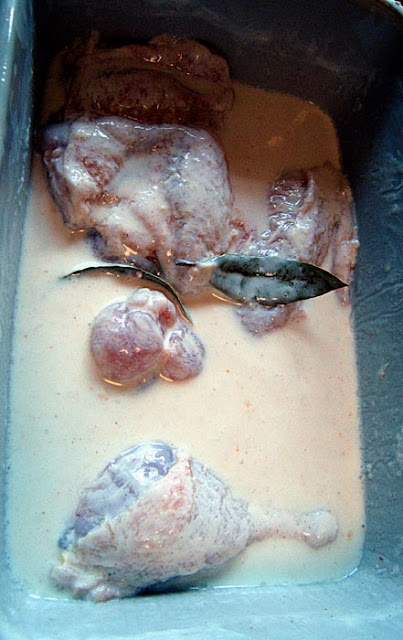 Chicken in a yogurt marinade

When you marinate pieces of chicken in buttermilk, the acid in the buttermilk tenderizes the meat. And if you add spices or herbs to the marinade, the chicken takes on the good flavors. That's the theory. 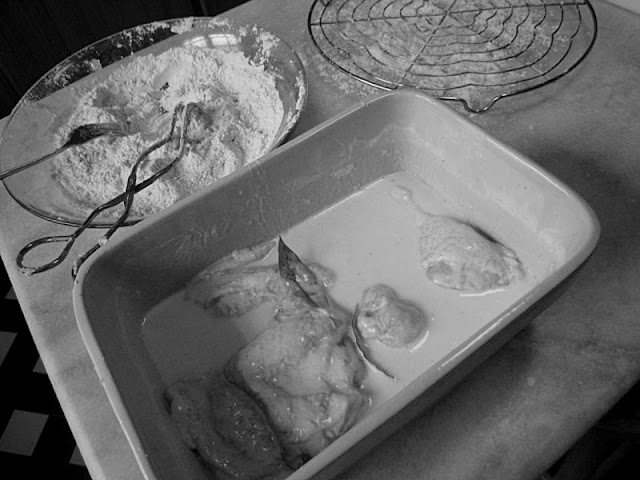 I think you can replace buttermilk with sour milk, and you can make milk sour very quickly by putting a little vinegar in fresh milk. That might be fine for other foods that you want to put buttermilk in — Southern U.S. biscuits, cornbread, hushpuppies, or Irish soda bread, for example — but for marinating chicken overnight I wasn't sure that's what I wanted to do. You know what sour milk tastes and smells like, right? What if I ended up having to throw out all my chicken after the overnight marinade?

I decided plain yogurt might be the best solution. So I mixed two containers of plain, low-fat yogurt, about half a cup of crème fraîche, and enough skim milk to make a fairly thick marinating medium, which I seasoned with a pinch each of hot paprika, black pepper, cumin, and dried thyme. I didn't want to overdo the seasonings, but I wanted at least a hint of their flavor in the final product. 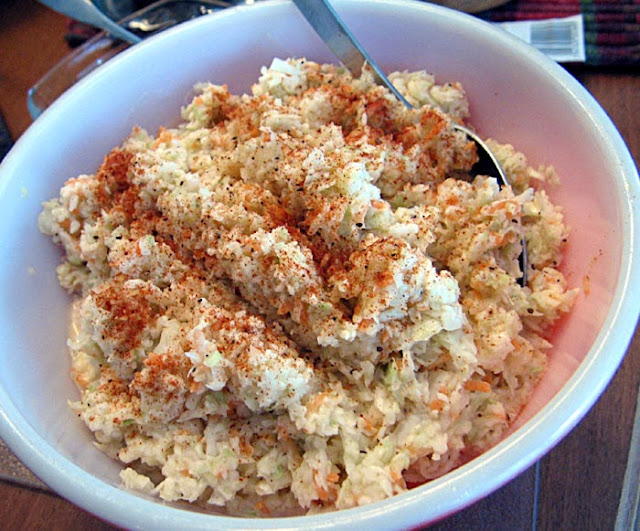 To go with the fried chicken, a bowl of home-made coleslaw

I had bought two chickens, and we decided to save the breasts for another recipe, so I ended up marinating four thighs, four drumsticks, and four wings in my yogurt mixture, overnight.

The next day I mixed up a couple of cups of flour with some salt, pepper, and a pinch of curry powder in a big shallow bowl. I lifted each piece of chicken out of the yogurt marinade (using tongs), let it drip for a few seconds so that the excess liquid would drip off, and then rolled it in the seasoned flour. I let the floured chicken pieces rest for 10 minutes on a rack before I cooked them, so that the flour would absorb as much yogurt as it could. 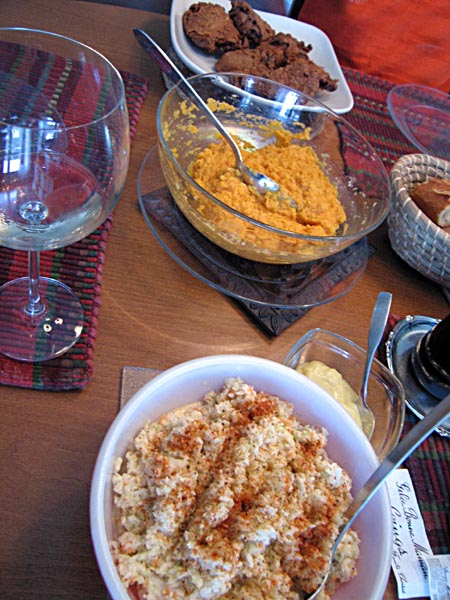 The last step was dropping a batch of four floured chicken pieces, one at a time, into a fryer containing hot canola oil about three inches deep. I used an electric fryer and set the temperature at 170ºC (340ºF).

As soon as the chicken was browned, I took it out, put it on a rack in a pan, and put the pan in the oven at about 250ºF (130ºC). The first batch of four chicken pieces was ready to eat when the second batch came out of the fryer and went into the oven. In the oven, the pieces had time to drip, so they were less greasy, and time to finish cooking all the way through. They stayed crispy. Next time I'll have to try the Korean method — less breading, double-frying. And maybe some pickled radish instead of coleslaw.