Last Saturday night, Peter Hertzmann invited us to have dinner with him at a nice restaurant. He wanted to have a meal at the Lion d'Or (two Michelin stars out of three possible) in Romorantin, but when I called I was told the restaurant was closed for the season. Peter has eaten there before — the chef is a friend of a chef Peter has worked with in the past — and Walt and I had dinner there once as well, on a separate occasion.

We looked at the Guide Michelin web site for comparable restaurants in our area that might be possibilities. Walt and I have been to a couple, thanks to friends, including Le Rendez-Vous des Pêcheurs (one star) in Blois, Le Domaine des Hauts-de-Loire (one star) near Onzain, and L'Hôtel du Cheval Blanc (one star) in Bléré. The Michelin site also listed the restaurant run by Bernard Robin (two stars) in Bracieux near Chambord and Le Choiseul (one star) in Amboise. 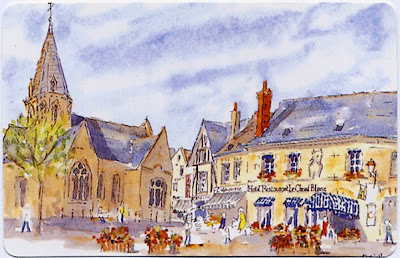 L'Hôtel du Cheval Blanc in the town of Bléré, near Chenonceaux
Peter told us to choose the restaurant, and we picked the Cheval Blanc in Bléré, where we had had dinner one night the first summer we spend in Saint-Aignan, in 2003. We remembered that it was very good and that the prices there weren't outrageous. The prices listed on the Michelin site for some of the other starred restaurants were much higher, and we didn't want to abuse Peter's hospitality.

So what were the prices like? There were three menus (which are what we call "prix fixe menus" in good American English). For 60 euros, you could have five courses: a starter, fish, meat, cheese, and dessert. For 49 euros, you got four courses by leaving off the starter and "just" having fish, meat, cheese, and dessert. The fish and meat dishes are of course served with vegetables and sauces.

Finally, for 43 euros, you also got four courses: a starter, a choice of meat or fish as a main course, cheese, and dessert. Walt and I went with the 43-euro menu, and I for one am glad I did because it turned out to be more food than I could comfortably eat. Peter ordered à la carte because he didn't want dessert. 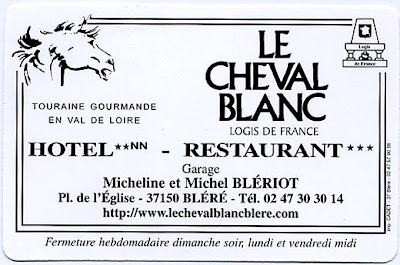 Here's what we ended up eating. While we were waiting for our starters, the server brought us each a plate of what are called amuse-bouches — we'd use the good American English term "hors d'oeuvres" for the same thing. On the plate were:
Except for the pumpkin-tomato soup, this amounted to about three tablespoons of food. The pumpkin-tomato soup wasn't much more than half a cup. Remember, though, it is not the appetizer but just a little something to amuse your mouth while you are waiting for the meal to begin.

As a starter or appetizer, Peter and I both had what they called un gratin d'huîtres, or oysters au gratin. It was a kind of very creamy soup with about half a dozen raw oysters floating in it. It was more like an oyster bisque than a gratin. There was a well-cooked julienne of leeks floating in the soup, which resembled a crème anglaise (a fairly liquid egg custard) but was savory (or salty) and not sweet. The dish had been set under a very hot broiler (called a salamander) for a couple of minutes so it was slightly golden on top.

Walt had a starter of langoustines, or prawns ("Dublin Bay prawns," to be specific), removed from their shells, cooked, and dressed with a light cream sauce, if I remember correctly. Since I was concentrating on my own appetizer plate, only Walt can give us more details about what he ate.

As a main course, I had a fillet of sandre, which is a European freshwater fish sometimes called "zander" or "pikeperch" in English, served in a creamy sauce. On there plate there was also a little ramekin containing a few sliced scallops cooked under the broiler. There must have been some vegetables, but the only one I remember was a little spoonful of cooked spinach.

As his main course, Walt had what the menu called médaillons de bar, which weren't medallions at all but which looked delicious. Bar is sea bass. The fish looked grilled, and there were vegetables on the plate. Peter had veal sweetbreads — ris de veau — but I couldn't see his plate very well from across the big round table so I can't describe it further. Peter did say it was the best meal he had had during his 10-day stay in France. He was in the Dordogne before coming to see us here in the Loire Valley.

To wash all this down, we ordered a bottle of Quincy wine. Quincy is a small grape-growing area about 25 miles east of Saint-Aignan, near the bigger town of Vierzon. Only white wines made from the Sauvignon Blanc grape are produced in Quincy, and ours was a 2005. When the time came to order a second bottle (twist my arm!), we chose a Reuilly. Reuilly is another small wine region and is adjacent to Quincy. The wines are also Sauvignon Blanc, and ours was a 2004. Both the wines, meant to be drunk young (the wines, not the drinkers) were delicious. The Reuilly was fruitier, and the Quincy was slightly more acidic.

There were two choices when it came to the cheese course. You could select samples of three or four cheeses off the restaurant's copious cheese cart, or you could order a salade de chèvre chaud — a mixed lettuce salad in vinaigrette served with two little rounds of bread with slices of goat cheese on them, slightly melted and browned under the broiler. I had the salad but I couldn't eat all of the cheese toasts. Peter had the same salad, and Walt had three pieces of cheese off the cart.

And dessert was still to come! I really wasn't hungry any more, but dessert was part of the menu I had ordered. There must have been a dozen desserts to choose from. I ended up ordering grilled pineapple slices with a scoop of mango sorbet served with two little macaroon cookies. I ate some pineapple and tasted the sorbet, but I didn't touch the macaroons. Walt had an assiette de sorbets, a selection of three fruit-flavored sorbet concoctions, which he said was very good. Peter skipped dessert.

I should mention that the desserts at the Cheval Blanc are served under what the chef calls a "gold dome". It's not gold but a few "threads" of hard, golden caramel shaped into a dome by dribbling the caramel over the outside of a bowl. You'd have to see it to imagine what it looks like, and I didn't take pictures. It's more of a gimmick than anything else.

We had coffee. We drove home. It had been pouring rain when we arrived, and it was still raining when we left. The drive takes about half an hour.

On the way home, Peter said he could see why the restaurant had only one Michelin star and not two, even though the food was very good. The service was a little rough. Our server was a young woman who had to take care of six tables simultaneously — at least 20 people in all. She was stretched to the limit, although she did have some help from the kitchen when it came to bringing dishes out to the tables.

All the customers in our dining room (which was one of two) appeared to be French, with the exception of us and a British couple at a table across the room. The British gentleman spoke French but I could hear his accent.

The restaurant's glassware was fairly crude by Michelin standards, Peter pointed out, and the flatware wasn't perfectly matched. One table knife, in particular, had been damaged; it looked as if somebody had tried to open a can with it. Before the main course came, the server laid out new silver, and by mistake she put the fish knives and fork at Peter's place and the silver that went with his food at mine. We had to point it out to her. She also dropped something on the floor at one point.

All those "defects" and errors would keep the Michelin inspectors from giving a restaurant a second star, even if the food was out of this world. And it was very good.