A California friend of ours who came to spend three months in France a few years ago said he liked French cooking overall. "But you have to like carrots," he said. "They put carrots in everything!"

I had never thought about that before. But I guess it's true, compared to American food. It's especially true of what they call plats cuisinés — long-cooked, braised meat dishes and stews. One classic is bœuf aux carottes, which is stew beef cooked long and slow in white wine with a lot of carrots. 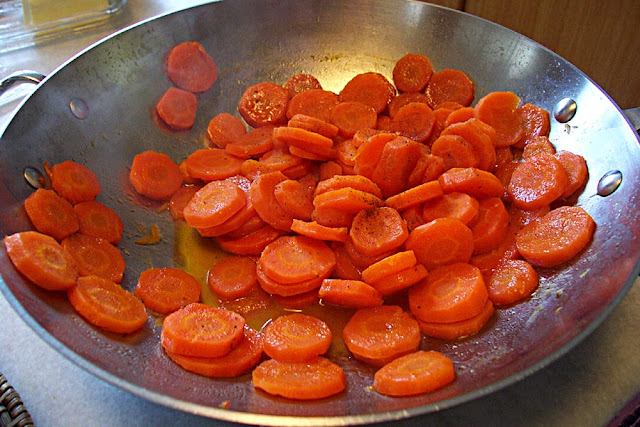 There's also carrot soup (called potage Crécy), made with carrots, onion, and sometimes rice, all cooked and blended into a creamy soup. And there's purée de carottes, which for some will call to mind jars of baby food.

One very French carrot classic is a starter salad of what is called carottes râpées — finely grated raw carrots dressed with vinaigrette. You'll find it on nearly every café menu in France. It is nearly always one of the components of an assiette or salade de crudités, which is a plate of mostly raw, dressed vegetables that can also include sliced tomatoes, shredded celery root or red cabbage, diced beets, and even a boiled egg or some diced, boiled potatoes. 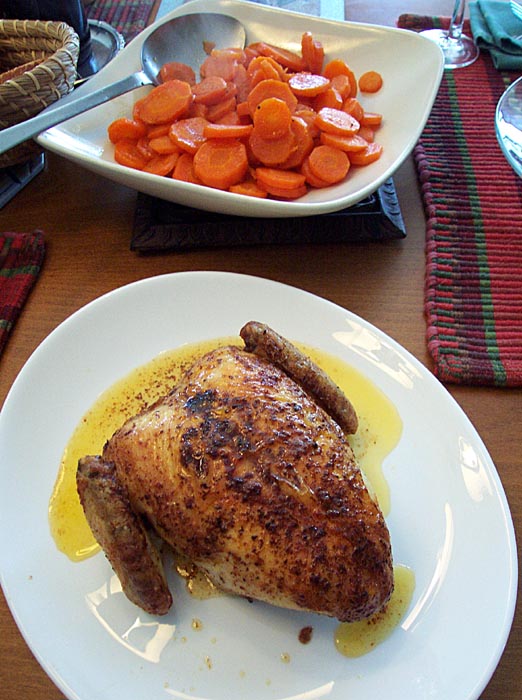 A recent lunch: honey-glazed carrots
with a roasted chicken breast

The Socialist politician Laurent Fabius, seen as an egghead intellectual, was trying to improve his image with the "common folk" in France. In a book about his campaign tours — he wanted the Socialists' presidential nomination — Fabius waxed eloquent in a book over what a good salad these carottes râpées make. It was as if he had never been served them before.

He saw them as the expression of some kind of culinary folk wisdom, apparently, and praised the common people of France for devising the recipe. Even though he was right, the press, pundits, and satirists made fun of him mercilessly, saying it was about time he discovered how regular people live and what they eat. 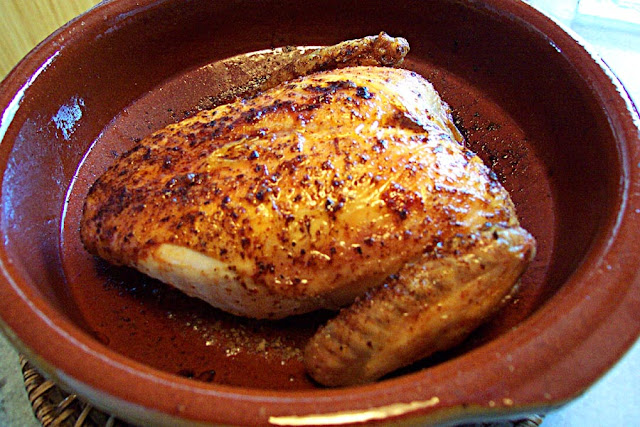 The chicken breast has not much to do with carrots,
but it was good. I sprinkled it with a spice mixture
our friend Cheryl gave us and then basted it
with butter while it was roasting in the oven.

How about this? The flowers we call Queen Anne's Lace in English are called carottes sauvages in French. Wild carrots. If you let carrot plants go to seed (it takes two years) the plants grown from those seeds will be Queen Anne's Lace and the roots, while edible, will be tough and fibrous. 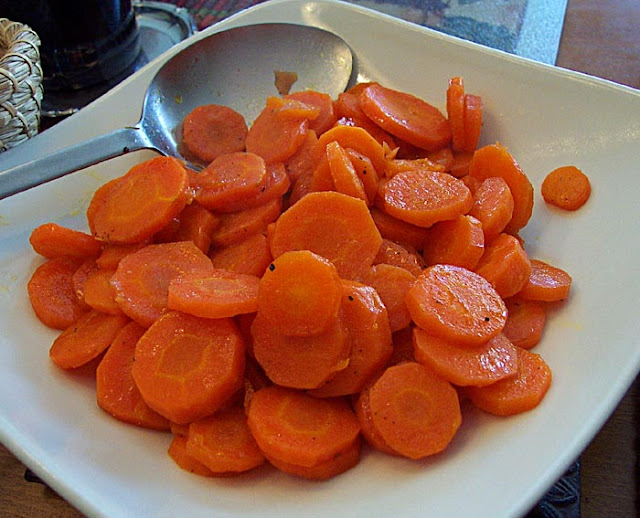 There are new carrots and old carrots, culinarily speaking. New carrots are young, tender, and sweet. Old carrots can be bitter and need to be blanched briefly in boiling water before being added to a dish, according to many French recipes.

They say you should cut carrots on the bias when chopping them into chunks. The bias cut lets more of the carrot flavor be released into any sauce they cook in. I'm skeptical. Why not cut them down the middle lengthwise, then, to really expose the heart. In fact, I read in Harold McGee's book on the science and lore of the kitchen that the flavor of the carrot is not in the heart but in the darker-colored part surrounding it.

You know those baby carrots they sell by the bagful in the U.S.? Well, those are not baby or new carrots at all. They are big, old carrots that have been ground down in a factory so that only the little heart is left. And the heart is the part with the least flavor. I wonder what the do with the part they grind away. Put it in Campbell's vegetable soup? Feed it to cattle? Lucky cattle.

Oh yeah, carrots are good for your eyes, improving your night vision. And Bugs Bunny loves 'em.
Posted by Ken Broadhurst at 09:00