A couple of months ago, a question about the number of boulangeries (bread bakeries) in the 15th arrondissement in Paris came up on an Internet forum I like to participate in. Somebody was going to Paris and planning to rent an apartment for a week.

Would he be able to find a good bakery in one of the "outer" arrondissements of Paris — the Fifteeth, let's say — if he rented an apartment there? Getting a fresh baguette and a couple of croissants or pains au chocolat in the morning was one of the points of going to Paris, after all.

The city of Paris, by the way, is divided into 20 arrondissements or districts, wards, neighborhoods . . . whatever you would call them in English. The First, Second, Third, Fourth, Fifth, and Sixth form the core of the old city. The others are all farther from the historical center. Notre Dame cathedral and the Louvre are in the center, for example, along with other monuments. 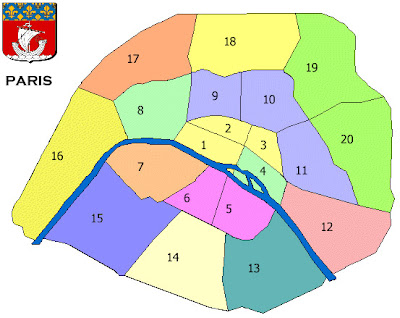 The dark blue line running through the city is
the river Seine, with two islands in it.
The arrondissements (which means "roundings" — the neighborhoods are "rounded off") start at the center and are numbered in a snail-shaped spiral moving gradually to the edges of the city. How appropriate, right? Administratively, Paris is one great big escargot. Things can move slowly there, that's true.

Americans planning to spend a week or more in Paris normally try to stay in the "central" arrondissements — the First through the Seventh. Or even the Eighth, which contains the Champs-Elysées and the Arc de Triomphe, after all. But some seem to consider the ones numbered 9 and above to be a kind of no-man's-land.

That can be a big mistake, really. The central arrondissements are the touristy areas. It's nice to stay there if your main activity will be seeing the most famous Paris monuments, of course. But you will pay a price — literally. Apartments, hotels, and restaurants in the center are expensive. Everything is. And you'll probably see as many foreign tourists as French people on the streets and in the shops and restaurants.

The man on the Internet forum who was planning to rent an apartment had found one in the Fifteenth (very close to the Eiffel Tower, in fact) and wanted to know whether there would be bakeries in that arrondissement. Since the mid-1970s, I have always had friends who lived in the Fifteenth, so I know that neighborhood. There are bakeries there, believe me. And all kinds of shops and markets, including street markets.

Armed with that knowledge and personal experience, but to make the point, I pulled up www.pagesjaunes.fr — the French yellow pages — on my computer and searched by category for boulangeries in French code postal 75015, which is the Fifteenth arrondissement of Paris.

Then I got even more curious (I guess I have a lot of time on my hands) and I searched all the arrondissements. Here's the result. This count includes only retail boulangeries-pâtisseries and the very few places listed as selling pains et viennoiseries at retail. In other words, all retail but not wholesale bread-and-pastry shops. 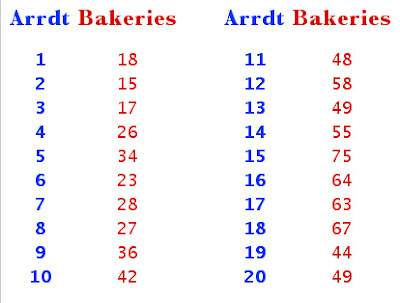 So there are 838 boulangeries in Paris, if I did the arithmetic right. On the Right Bank there are 574, and on the Left Bank 264. How's that for some good trivia?
Posted by Ken Broadhurst at 22:44