My grandfather, father, and I were all named Charles. Granddaddy was the only one who was called Charlie. A lot of people, including my mother, called him Mr. Charlie. My father was called Kenneth or Buddy, and I ended up as Kenny, now Ken.

One of Mr. Charlie's grandmothers was a Cherokee woman named Sabrina, I learned after his death. Nobody in the family ever told us about her. It was my father's youngest sister's husband, an Irish-American from Chicago named Johnny Doyle, who did the genealogical research and told me about it all. That was in the early 1970s. Uncle Johnny said he hadn't succeeded in tracing the family name back any farther than that. 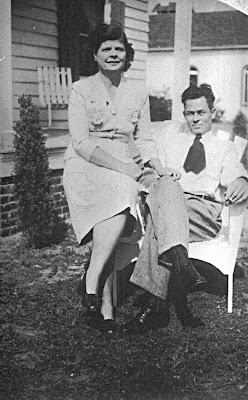 Miss Daisy and Mr. Charlie in the early 1950s

I remember that Granddaddy kept chickens in a coop in his back yard. He also had a couple of pear trees that produced good fruit, and a grape arbor. He and Grandmama lived just three blocks up the street from us. At one point, they had a two-tone, red and white, 1957 Chevy.

Grandmama's name was Flora Bell Gaskins. They called her Daisy, or more properly, Miss Daisy. Some of her ancestors were native Americans too, my mother says. I don't know anything else about her family. She did have sisters named Thelma and Nellie that I remember knowing, and a brother named Billy who ended up living in Louisiana. He was in the shrimping business.

Grandmama always kept bags of hard candies in her kitchen cabinets. All of her grandchildren knew it, so when she wasn't looking we would climb up on the kitchen counters, reach for a bag, and steal a few candies, which we took outside to eat in secret. I liked the butterscotch ones. She died in 1977. She seemed lonely after Mr. Charlie's death in '69. 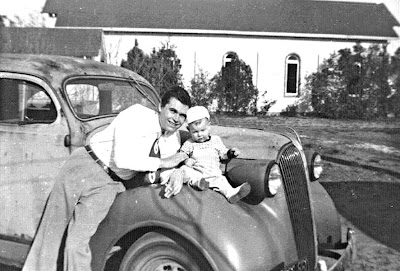 I was living either in France or in Illinois when she died. I've been in France when a lot of big family events took place. Weddings, births, and deaths kept right on happening, in my absence. I was the one with wanderlust. Here I am again, except that I don't wander much any more.

I don't know much about Granddaddy's family either except the name of the town where he was born. It was about 75 miles inland from my home town. Mr. Charlie and Miss Daisy had five children. All but two are now deceased, including my father, who died in 1990. There were 16 or 17 of us grandchildren.

In 2005 I went "home" for a couple of weeks. While I was there I went to see my father's surviving older sister. She was 82 or 83 by then. Her name is Geneva, and at that point she had a house full of paintings that we had done or was working on. She has since moved to Florida to live closer to her daughter.

Aunt Geneva showed me a painting of the house that she said Mr. Charlie and Miss Daisy lived in when their children were growing up. She had painted it from memory, she said. The house had been was a few miles west of town and down on the shore of Bogue Sound. Geneva said they were very poor, and the house was built of rough boards and never painted. Poor people lived on the shoreline back then; people who had means didn't want to live that close to the water. That certainly has changed!

My mother says that when Kenneth was growing up, one day a week he had to stay in the house because his only set of clothes got washed and hung out to dry that day. He didn't have anything else to put on.

I asked Aunt Geneva how it was that Mr. Charlie had come to live in our town on the coast. She said he met Miss Daisy when she traveled the 75 miles inland by train to visit cousins in the town where he lived. He saw Daisy in church and ended up asking her to marry him. If I'm doing the arithmetic right, they must have been in their mid-20s when their first child, a daughter named Juanita, was born.

After their wedding, Charlie and Daisy lived for a short time in his home town, but Daisy missed her family too much. They ended up moving back to the coast, and stayed there for the rest of their lives. Geneva said her father's parents were also desperately poor. A lot of people were, back then. I don't know what Charlie did for a living before World War II.

Life in Saint-Aignan reminds me a lot of life as it was in my little town in North Carolina forty or fifty years ago. It certainly very different from life in other places I've lived since 1970: a big Midwestern university town; Washington DC; Paris; and San Francisco. In many of those places, hardly anyone was a native. We mostly came from elsewhere and didn't have family ties. 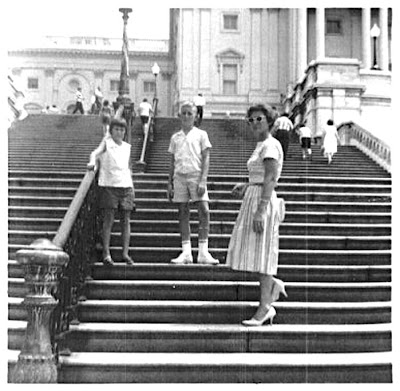 In 1961 we took a car trip to Washington DC and New York City.
My father must have taken this snapshot of my sister,
me, and our mother on the steps of the U.S. Capitol.
Can you tell that those were the Kennedy years?

The people I've met here in Saint-Aignan have mostly always lived here, with a very few exceptions (including some British immigrants). Some moved to Paris or another big city when they were younger and had a career there, but now they've come back to live out their lives in the place where they grew up. I guess I did the same thing, on some level.

If there were a pattern to life, I suppose I would end up living out my second "retirement" (if I get one) back in North Carolina, where I had my first "growing-up." Right now I'm working on the retirement that corresponds to my second "childhood" — the one I had here in France in the 1970s.