A few days ago I mentioned cantal cheese in a posting, and Dennis asked me in a comment if we can get the three different cantal cheese styles here in the Loire Valley. One is doux (mild), one is vieux (aged), and the other is in-between (entre deux). 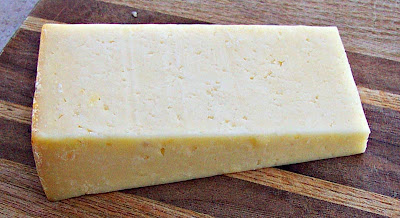 Un morceau de cantal doux
The only cantal I had been buying until yesterday was the in-between style. But yesterday afternoon at the Leclerc hypermarket (une grande surface) in Amboise I noticed that they were selling cantal doux. I bought some and it's good, even though I think I like the entre-deux cantal better.

All the cantal cheeses I am finding around Saint-Aignan are AOC (appellation d'origine contrôlée), meaning they are made in the official production areas centered on the Cantal département using milk and methods conforming to strict specifications. They are the real thing, not knock-off versions or counterfeits. 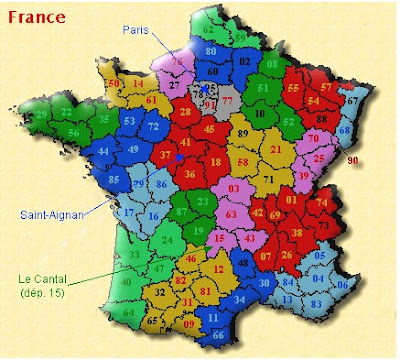 The Cantal département is about four hours
south of Saint-Aignan by car.
According to the Larousse: Les Fromages book written by Robert J. Courtine (Paris: Larousse, 1973, 1987), the cheese now called cantal used to be called Fourme de Salers. Salers is a township in the Cantal département, which in turn is in the mountainous central French region called L'Auvergne, and the Salers area is known for raising and breeding a race of cattle that produces both good milk and fine beef.

Cantal is probably the oldest French cheese, according to Monsieur Courtine, having been produced for more than 2000 years. It is mentioned in the works of the Roman writer Pliny the Elder. According to Wikipedia's French site, about 18,000 tons of cantal cheese are produced annually, if the statistics for 2003 are indicative. That's almost 40 million pounds.

Cantal is an uncooked, semi-soft cheese with a dry crust. It is good for your digestion, according to French doctors specializing in such matters. "Cantal is what it is," a local poet is quoted as saying. "It's a peasant cheese. Trying to dress it up is a big mistake, because it is just the simplest of products."

A British friend who lives here in Saint-Aignan told me recently that she likes cantal because it melts smoothly in soups and doesn't get stringy the way gruyère or comté does. I haven't tried that, but I know the Auvergne specialty called aligot, which is mashed or pureed potatoes with cheese melted in them, is made with cantal.

Here's a picture of some French guys wearing berets and making aligot in a gigantic pot:

Making aligot on a grand scale
I found the picture on this site, where there is also a recipe (in French). It calls for potatoes, cheese, cream, and garlic.
Posted by Ken Broadhurst at 15:00