Well, sunset, sunrise, actually, in this case. February has been mild and mostly damp and gray, but we have now had a couple of pretty nice afternoons. It's such a pleasure to live in a place with nice views of both sunrise and sunset. 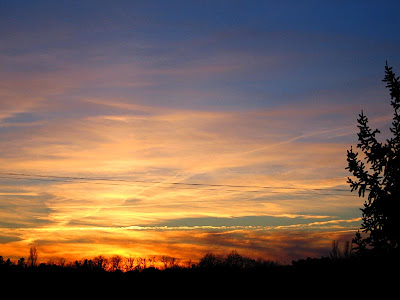 When it is time to close the shutters for the night, on nice days we get gorgeous views of the sunset from our back windows.

Shutters (in French, volets) are funny, aren't they? I don't know exactly why we take the trouble to close them at night, but that's the way things are done here in France.

Closed shutters make for a very dark room. I guess they have some value as insulation against the cold. And of course it's reassuring to close them on very windy days and nights, to protect the windows against flying objects. I've never seen any flying objects, besides pigeons, woodpeckers, crows, and little songbirds, but still... 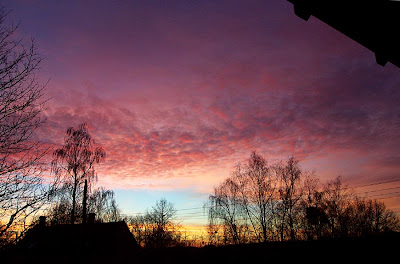 Why shutters? There has always been a lot of warfare in France. The Romans marched in. Later, the so-called "barbarians" pillaged and plundered.

Before modern France was created in the Renaissance and Classical centuries, 500 years ago, local lords and their armies fought with each other over territory. The English kings and their armies had come and gone by then, too, but not without a 100-year struggle for power over what is now French territory.

Then there were the wars of religion between catholics and protestants at the end of the Renaissance. Later, the French Revolution roiled the country. And much later still, the Germans invaded France in 1870, 1915, and 1940. You can start to understand why people got into the habit of locking down their houses and shuttering their windows at night. 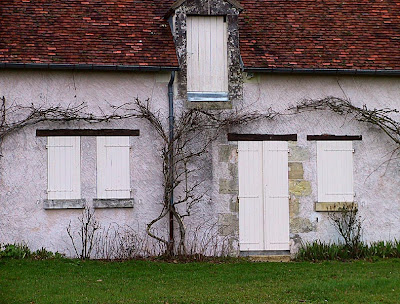 Another theory I've read about closed shutters has to to with taxes. People in the cities closed their shutters at night to prevent prying eyes, especially those of the tax assessors and collectors, from seeing into their homes at night. They didn't want anybody to see how well they were living and what treasures they had in their house.

Maybe shutters were less trouble than heavy drapes. Or because there were shutters for purposes of defense, there was no need for heavy drapes. Having both seems like overkill. I know we don't bother with drapes. We just close the shutters at night. 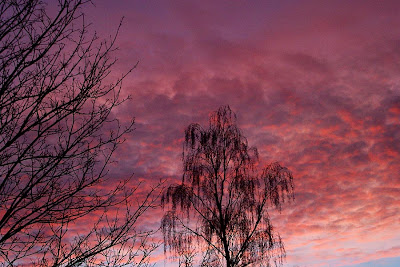 That February 16 sunrise merited a close-up.

It's fun to get up in the morning and open the shutters. There's a kind of suspense involved. Is it raining? Gray and foggy? Or sunny? Is there a nice sunrise? Has anything bloomed overnight? Are there interesting birds in the yard?

Closing the shutters at night is a different story. A few weeks ago, we were invited over for a late afternoon party by our neighbors. Also present were some other neighbors. As we departed at 7:30 or so to walk home, our hosts started closing up all the shutters on their house. « Ah, la corvée des volets ! » another neighbor remarked — the shutter chore.
Posted by Ken Broadhurst at 10:21