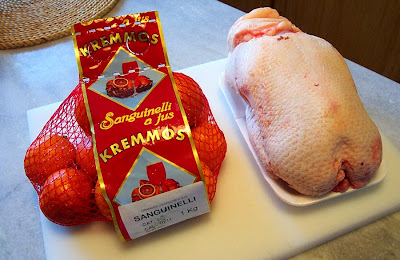 A bag of blood oranges and a canette, or female duckling
Ever since New Year's Eve — or mid-December, really, when we were invited by a friend who said she was going to be making duck with orange sauce for our NYE dinner — this classic French dish has been on my mind.

Last week one of the French supermarket chains, E. Leclerc, advertised ducks (canettes, or young hens) for sale at a good price. I drove down to Loches, which everybody knows isn't at all far from Saint-Aignan (wink, wink), to buy one, since we don't have a Leclerc store in town. 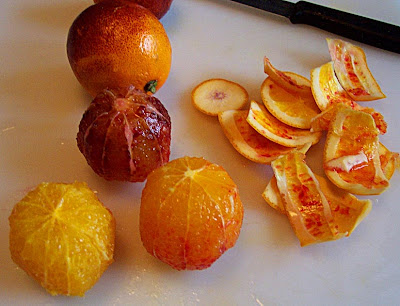 Peeling the blood oranges, which were pretty small
as oranges go
I did some Google searching for recipes and looked in the standard cookbooks before deciding exactly how I was going to cook the duck and make the orange sauce. One recipe that I looked at said the best oranges to use would be oranges sanguines — blood oranges — because their juice has a peppery flavor. (I'm not giving a link to a recipe here because I didn't end up following any single one. I kind of made up my own.) 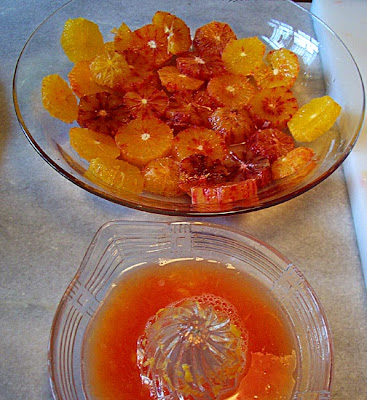 Peel, slice, and seed 6 or 8 oranges, depending on size,
and then juice a couple more for the sauce
I went to Intermarché and discovered that they were selling one-kilo bags of blood oranges for €2.50. I also needed to buy some cognac and an orange-flavored liqueur for the dish; I bought a bottle of Triple Sec. A lot of recipes called for Cointreau or Grand Marnier, which were much more expensive.

A lot of recipes also called for cooking the duck whole by first browning it on all sides in a big pot and then adding some water and chopped vegetables (carrots, onions) and letting it braise, covered, for 45 minutes. Or for roasting the whole duck in the oven. 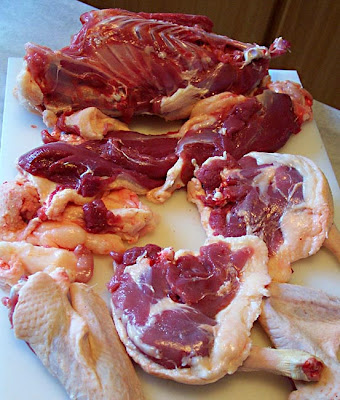 Cut up the duck the way you would cut up a chicken.
In this case I took the breasts off the bone.
I decided I'd rather cut the duck up before cooking it. That way it would cook a little faster, it be easier to serve, and I would be able to cook the carcass and trimmings separately to make broth and skim off the duck fat for future cooking and seasoning uses. After I cut the duck up, I trimmed the pieces carefully to reduce the amount of skin and fat left on them. I didn't want too much fat in the orange sauce.

Then I cooked the duck pieces skin-side down in a hot pan to brown them well and to render out the layer of fat that lies under the skin. When I turned them over, I added a big carrot (cut up) and some whole peeled shallots and garlic cloves to the pan along with a bouquet garni and a cup of liquid. Salt and pepper as needed, of course.

Walt had gone out to the garden and gathered some herbs — sage, bay leave, thyme, and parsley — for the braising liquid. We had a leek in the fridge so we rolled and tied up the bouquet garni in a piece of the green leek top. 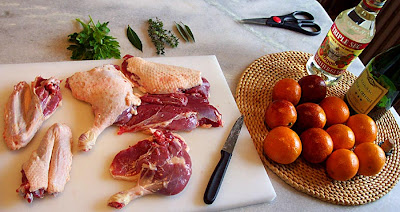 Herbs from the garden, trimmed duck pieces, oranges, and liqueurs
The recipe called for water. But I had about ¾ cup of very gelatinous, very dark-brown duck stock in the fridge. I had collected it when I cooked previous ducks and had been using it up gradually to flavor soups and sauces. It was like gelatin. What the heck, I thought, I'll use the duck broth instead of water. Then the cover went on the pan and the duck and veggies braised slowly in the liquid for about 45 minutes. 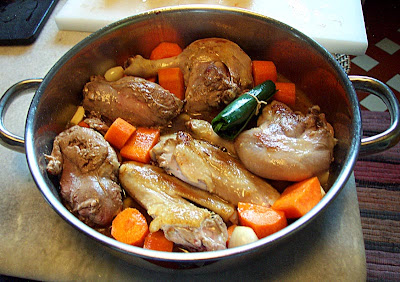 The duck pieces in mid-braising, with
carrots, shallots, garlic, and herbs
While the duck was cooking, Walt and I were busy peeling and cutting up the oranges. Then we sliced them in a bowl so that we could collect any juice they released. It's easy to see and remove the seeds from the slices. We didn't get a lot of juice from the slicing process, so Walt juiced a couple of extra oranges, for good measure. 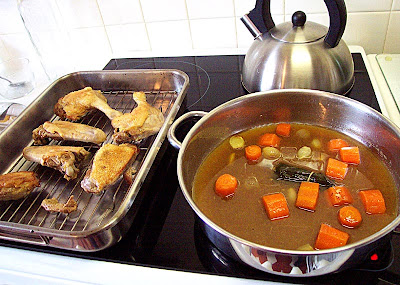 Duck pieces removed from the braising liquid
After the duck had braised for 45 minutes and seemed done, I added, according to different recipes, about ¼ cup orange liqueur (Triple Sec, in my version) and a couple of tablespoons of cognac to the pan and removed it from the heat. It needed to rest for 10 minutes like that.

I decided to brown the cooked duck pieces in the oven when I took them out of the braising liquid, so after the 10-minute waiting period I removed them to a rack in a roasting pan. That pan went into a hot oven while I turned the heat back on under the braising liquid, added about ½ cup of orange juice to it, and started letting it simmer to reduce just a little. I also added about ¼ cup of vinegar, which I had seen used in several recipes. The sauce needs to be tart and sweet at the same time. 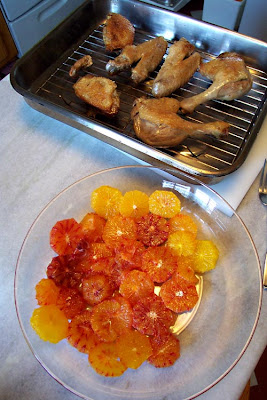 Duck pieces and orange slices
I tasted the sauce and decided to add a little more orange liqueur and cognac. Couldn't hurt, you know... When the sauce was starting to reduce and the duck pieces in the oven were browning nicely, I thickened the sauce by dissolving a heaping teaspoon of potato starch (you could use cornstarch) in ¼ cup of cold water and then slowly stirring that slurry into the bubbling sauce. It thickened just slightly.

While the sauce continued cooking on low, I melted some butter in a skillet and slid in all the orange slices so that they would warm through. Voilà! Everything was done. 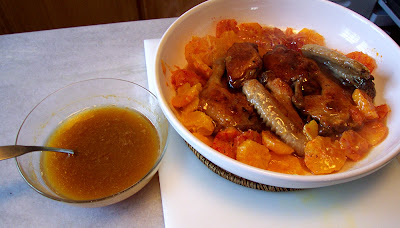 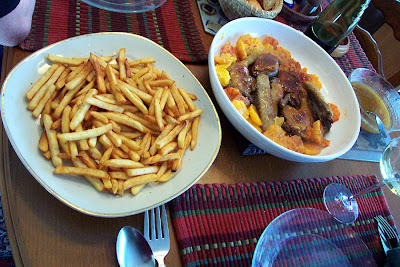 À table !
What do you eat with duck à l'orange? The recipes I looked at suggested sautéed potatoes. We made French fries, because the fryer had fresh oil in it and we had frozen French fries on hand. That was a lot easier than peeling, cutting up, and sautéing fresh potatoes, and just as good. 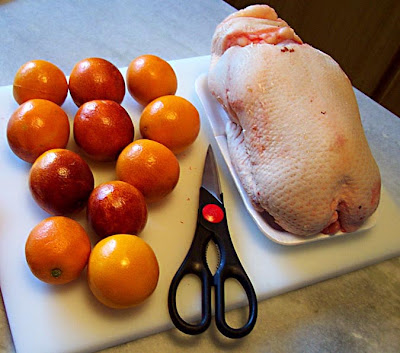 The makings for duck with orange sauce
I had never made canard à l'orange before, and I think the only time I had ever eaten duck with orange sauce was about a year ago. Our friends Susan and Ray were here visiting, and we had our final lunch together at a Logis de France restaurant called the Agnès Sorel, which is in the village of Genillé, near Loches. The lunch special that day was canard à l'orange. It was good. Not exactly like mine, but not that different either.
Posted by Ken Broadhurst at 09:15