In 1972, the University of Illinois sent me to spend a school year in Rouen. I was given a job as an assistant d'anglais in a boys' boarding school called the Lycée Corneille (women went to the Lycée Jeanne-d'Arc back then). Being an "assistant" meant that I helped the English teachers at the school, who were all French and had various levels of fluency and fairly thick accents in English, in any way that I could or that they requested. Two or three of the half-dozen of them asked me to hold conversation sessions in English with their students one hour a week. My job was supposed to be half-time, or about 20 hours a week, and I didn't make enough money to be able to travel much or even eat in restaurants, for example. I was 23 years old and I didn't want to ask my parents for financial support.
1 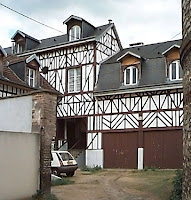 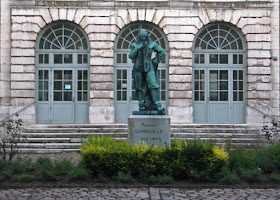 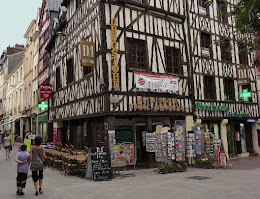 It was up to me to find a place to live. Other assistants in other schools around Rouen and Le Havre were given rooms in their schools for which they may or may not have had to pay rent, but I wasn't offered that option. I got lucky, though. A woman who worked in the offices at the Lycée Corneille told me that her parent had a small apartment that they were remodeling and would rent it to me for a very good price (probably about $40 a month).

I jumped at the chance. It was only a 10 to 15 minute walk from the lycée. It was even closer to the place du Vieux-Marché where I could buy groceries. And it was just a 5-minute walk to the train station, in case I wanted to go to Paris or elsewhere. My apartment was in the building in photo #1. Photo #2 shows the statue of the 17th century playwright Pierre Corneille, for whom the lycée was named. Photo #3 shows a café/restaurant called Le Drugstore that was about half-way between my apartment and the lycée. I had many cups of coffee there, as well as the occasional "banana split" that the place was famous for back then. I might have even had a hamburger there now and then.
4 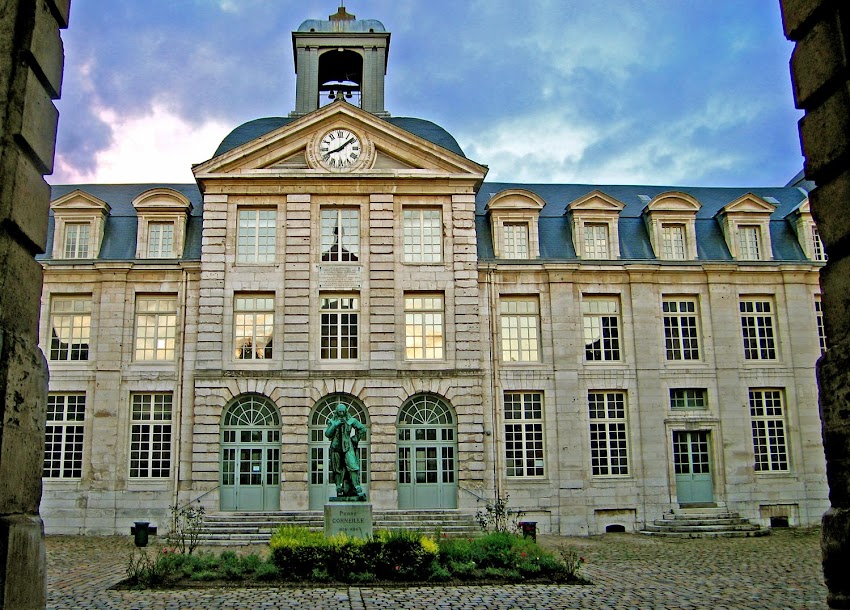 At one point in history the lycée was known as the College Royal. Famous alumni have included the writers Gustave Flaubert, Guy de Maupassant, André Maurois, Pierre Corneille, and Thomas Corneille; the painter Camille Corot; politicians Jean Lecanuet and Jean-Luc Mélenchon; and actors Jean Rochefort and Karine Viard. (You might have to look some of those up.) The English teachers at Corneille were fairly snooty, and several of them weren't happy to have an American teaching assistant because they thought their students ought to learn English with a British accent. Some of them made fun of my accent, but the students were very interested in things American.
It was all quite an experience, even though my living conditions were pretty primitive — no telephone or bathroom, and a WC shared with other tenants, but at least I had a refrigerator, a stove, hot water, a radio, and a rented TV. I took showers in the dorm at the lycée when the students were in class. At Christmastime I caught the flu and thought I was going to die. I somehow acquired a portable (manual) typewriter and did some typing for some of the professors to earn a little bit of extra money. Good bread was cheap, as was decent wine. I could afford a newspaper every day and a book from time to time. I learned a lot about cooking on a tight budget.
5 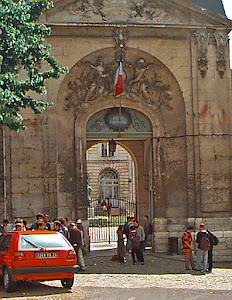 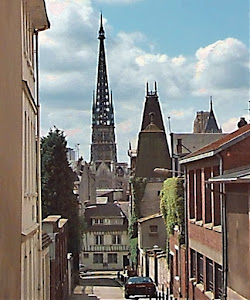 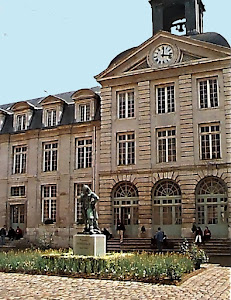 The middle picture here shows the view I had on my way back to my apartment when I left school. I walked past the Tour Jeanne-d'Arc twice a day. I had a good year. I made friends and learned a lot of French. I co-authored a book with one of the lycée teachers and he got it published by Hachette in Paris.
Posted by Ken Broadhurst at 07:15