The rue Montorgueil, 10 minutes' walk south of the porte Saint-Denis, is where I lived for three years, from 1979 until 1982. I was in my early 30s back then. Montorgueil means something like "proud mountain" and according to a book I've been reading it was at one time known as the Mons Superbus ("superb mountain"). What was this "superb" mountain? Nothing more than a huge pile of rubble that resulted from the demolition of the old walls of the city in the 17th century. Those walls stood on the strip of land that is now called les Grands Boulevards — the walls were built in the 14th century during the reign of king Charles V and were designed to protect the northern parts of the expanding city from the English at the beginning of the 100 Years' War. 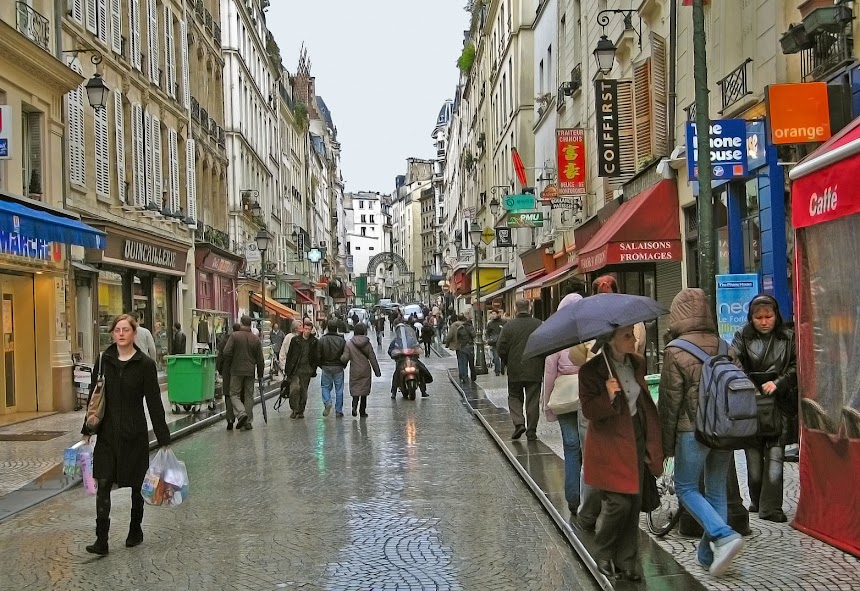 The street now called la rue Montorgueil started farther north back then than it does now, at least in name — names change over the centuries. The northern part of the street was re-named as la rue Poissonnière because it was the route by which fish and seafood from the northern coast (the English Channel) were brought into Paris over the centuries — Montorgueil was the city's big oyster market. La rue Montorgueil led south to the city's central market, later known as Les Halles. The restaurant below is a reminder of that distant past — Cancale is a town near Saint-Malo and the Mont Saint-Michel that is famous for its oysters. 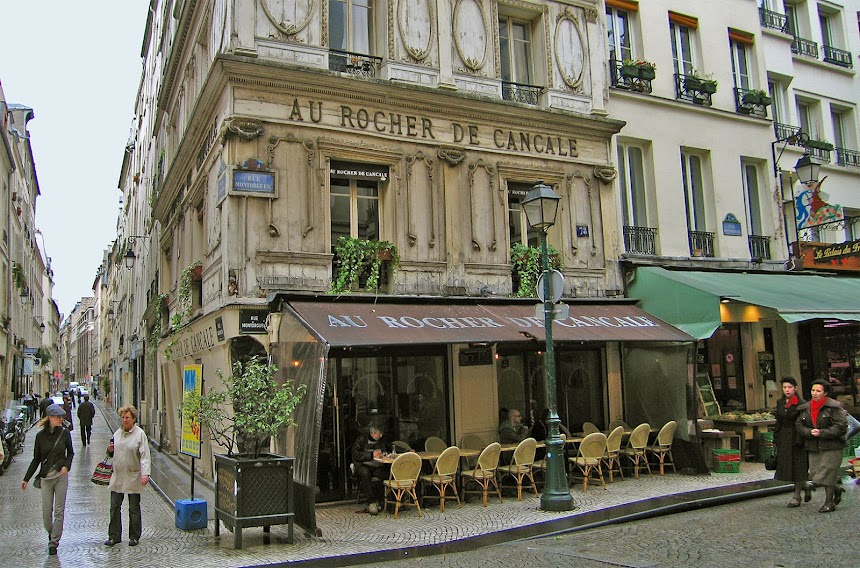 Anyway, I didn't actually live on the rue Montrorgueil but on a side street called la rue Saint-Sauveur. The door leading into the courtyard overlooked by the 5th-floor walk-up apartment where I lived was just a few steps off Montorgueil. Back then, nearly 40 years ago, the street was lined with boulangeries, boucheries, charcuteries, and fromageries. Some of the shopkeepers set up tables on the sidewalks in front of their shops and put out the products they specialized in to attract customers. Others were what were called marchands des quatre saisons ("merchants of the four seasons") who didn't have shops but just rolled out carts from courtyards along the street and sold produce or cheeses or whatever to passers-by. The street felt like one big open-air market. It was also still used by car traffic back then, so the air smelled of exhaust fumes, cars were parked everywhere, and drivers blew their horns with abandon when double-parked cars or delivery trucks caused traffic jams. 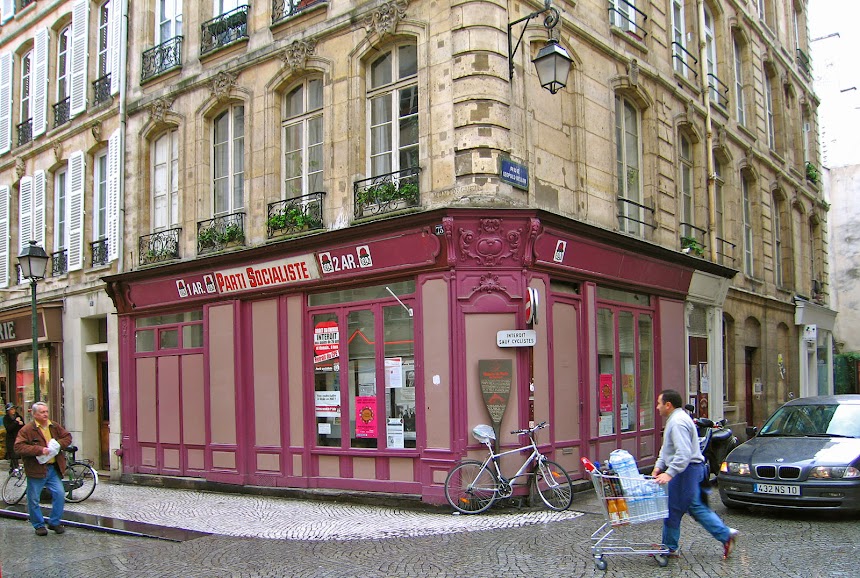 I remember that I liked the fact that the Socialist Party had a storefront on the street that I walked past every time I went out of my apartment. It was still there in 2006, but now the storefront seems to have been converted into a tourist shop selling souvenirs and postcards (that's what I see on Google Maps street view). François Mitterrand, a French socialist leader, was elected Président de la République in 1981. I remember seeing Jacques Chirac, who was the mayor of Paris as well as Mitterrand's prime minister for a time and who was himself elected president in 1995, who used to campaign by walking along the rue Montorgueil and shaking hands with people shopping and working there. One day I accidentally stepped on his foot as I was pushing my way through the crowds. There were also quite a few beggars and homeless people working the street. One old woman in rags would always ask people to go into a hardware store and buy her some cheap alcohol, the kind you burn in internal-combustion engines, to drink. 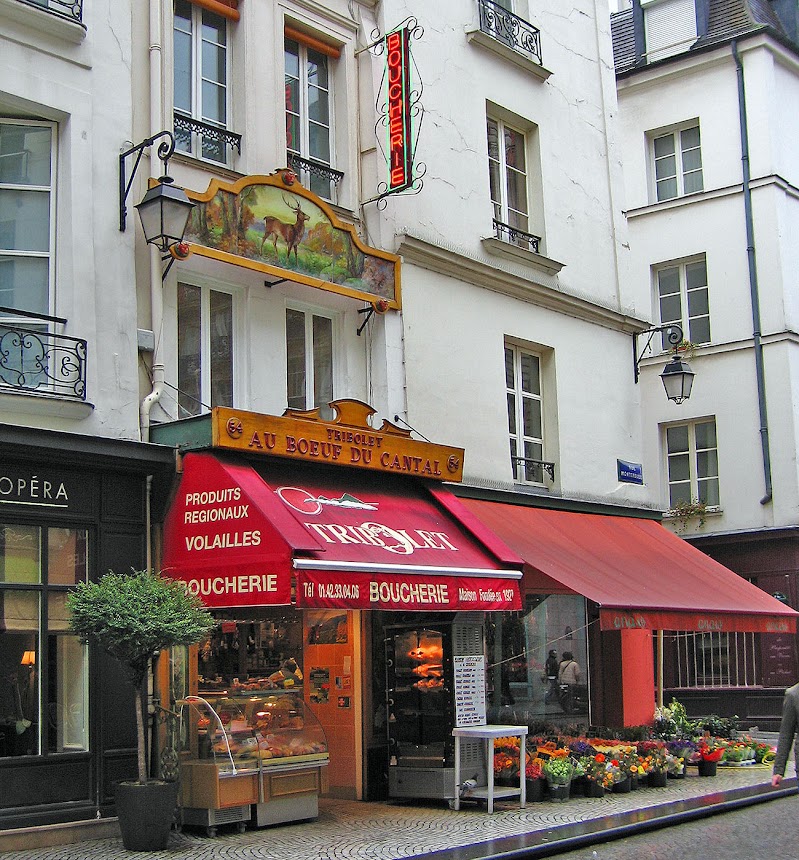 It's funny the things you remember. One day I was standing in line to buy meat at the butcher shop in the photo above. The woman ahead of me in line ordered a rabbit (everyday food here). The butcher asked her if she wanted him to cut it up for her. No, she said, I'll do that at home. If you chop it up with a cleaver, you'll leave little bone splinters in the meat and my husband will refuse to eat it. There was a pork butcher's shop across the street where I shopped often. The woman behind the counter always asked me if I knew how to cook whatever it was that I was buying for dinner. When I said no, not really, she would explain how she herself would cook it. I learned a lot from her. 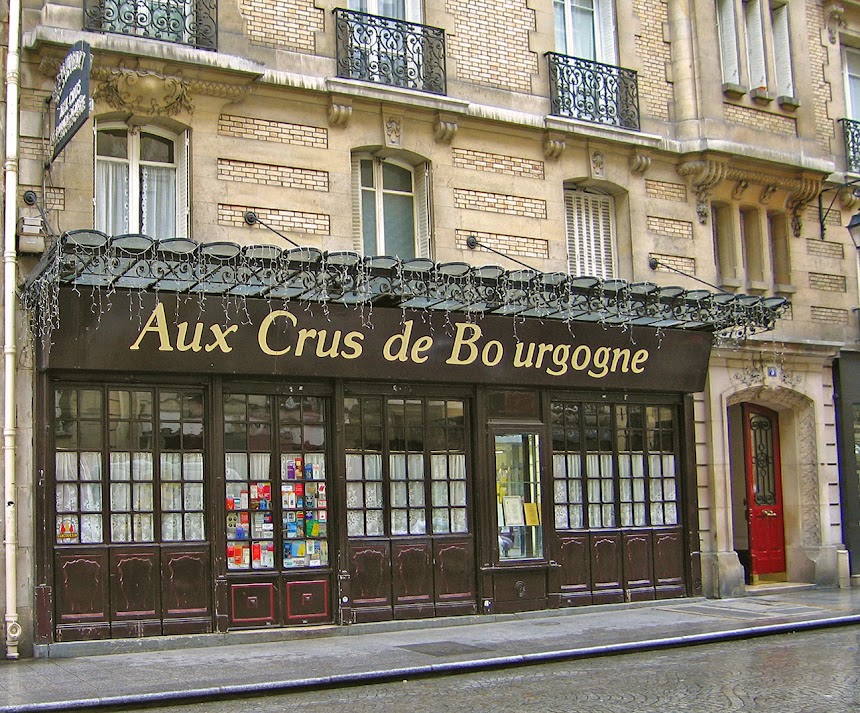 I remember several dinners I had at the restaurant above. Like the the shops in the neighborhood and other restaurants nearby, it seemed very old-fashioned and was informal and bustling. The food was standard French fare at the time, and I really enjoyed it. Walt and I had dinner there once in 1982 with friends of his from New York who were on vacation in Paris. I have a picture somewhere... 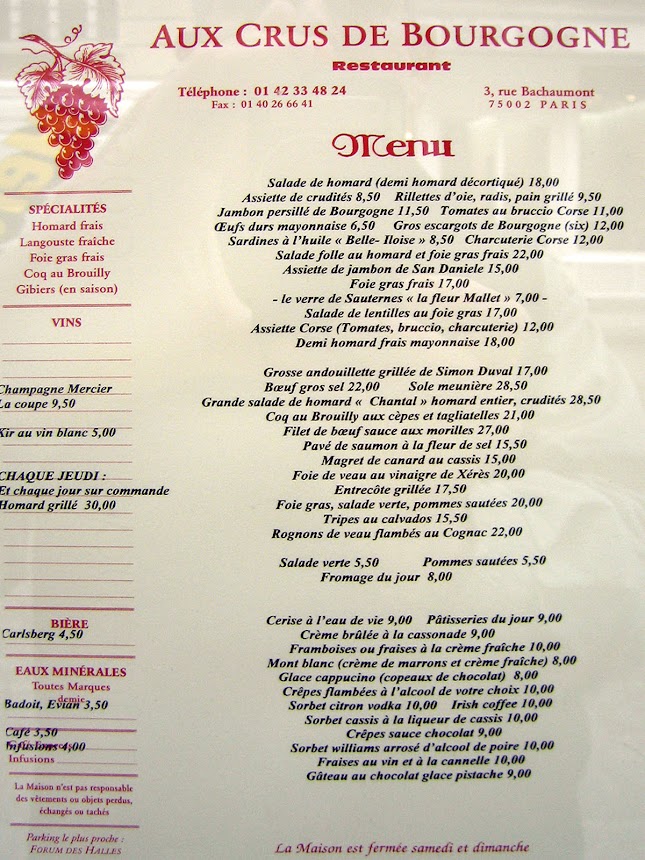 Aux Crus de Bourgogne — crus are typical regional wines — is still there and still in business. I downloaded the restaurant's current menu a couple of days ago so that I could compare it to the one from 2006 in the photo above. Maybe I'll get to have a meal there again one day. Prices are higher now that the rue Montorgueil has been gentrified and pedestrianized, with many new cafés and restaurants replacing a lot of the old food shops. I wonder if the atmosphere has changed. I see on TripAdvisor that 27 French people have given the restaurant and food an Excellent or Very Good rating, while only five have rated it Average, Mediocre, or Horrible.
Posted by Ken Broadhurst at 06:40