A follow-up to my post yesterday. Same photos, more text... 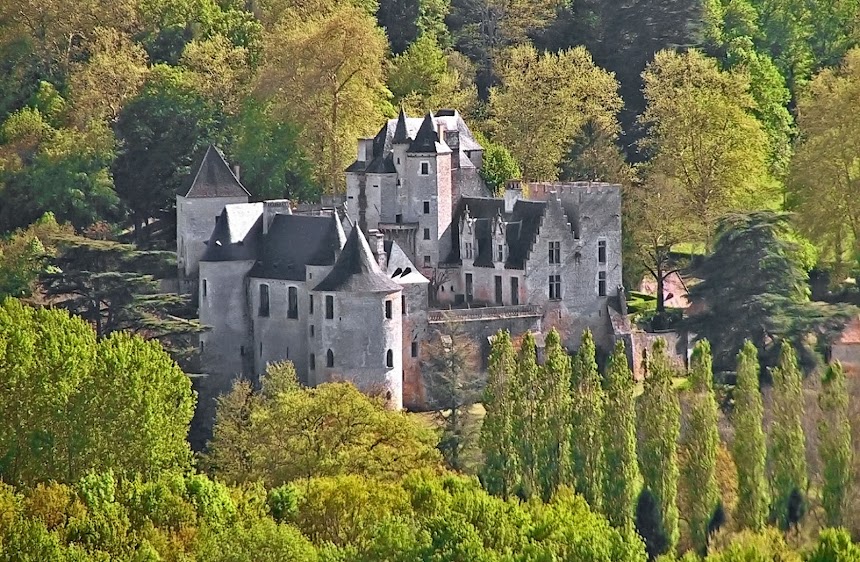 It took me a few hours of research to find out that this is the château de Fayrac, above. Wikipédia describes it as une demeure française des XVe, XVIe et XIXe siècles bâtie au bord de la Dordogne. It's located on the left bank of the river about 15 kilometers southwest of the town of Sarlat, on the territory of the commune of Castelnaud-la-Chapelle. During the Hundred Years' War (1337-1453), Fayrac served as an outlook post for the people who resided in the nearby château de Castelnaud and who supported the king of England. During the French wars of religion in the second half of the 16th century, it was a Protestant stronghold. Today it is privately owned and not open to the public. I'm not sure exactly where I was standing when I took this photo. 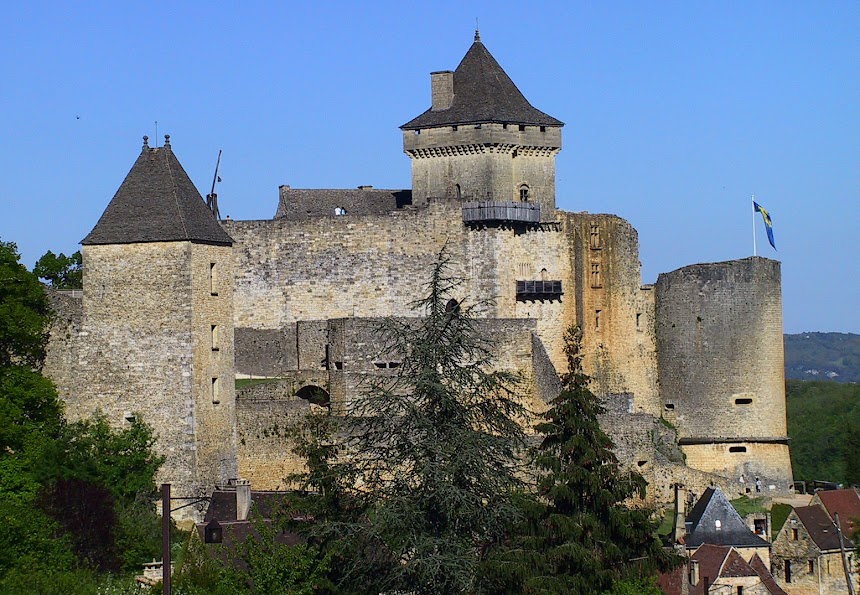 Speaking of the Castelnaud-la-Chapelle, this is its château. Along with Fayrac, it's one of the six châteaux located along the stretch of the  Dordogne river that's called la vallée des six châteaux. The first château at Castelnaud was built in the 12th century. It was replaced by one built over the decades in the 13th. Castelnaud was loyal to the English but was captured by the armies of the French king Charles VII in 1442. Castelnaud was abandoned at the beginning of the 1789 French revolution and served the local as a stone quarry until 1832. This fine example of a feudal castle was restored between 1967 and 2012. It's known for its medieval warfare museum and is visited by more than 200,000 people every year. 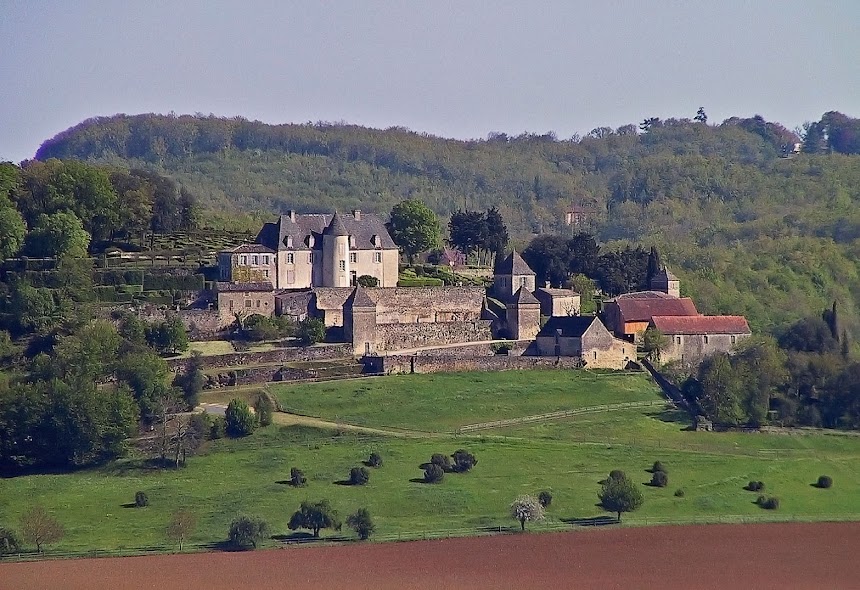 Just across the river from Fayrac and Castenaud, on the right bank, you'll find the Jardins du château de Marqueyssac, an 18th century château. The gardens were created in the last half of the 19th century. They are called jardins suspendus ("hanging gardens") because they are planted on a high hillside overlooking the Dordogne river as well as Fayrac, Castelnau, Beynac (photo below), and the beautiful village of La Roque-Gageac. Here's a web site about them with both French and English versions. 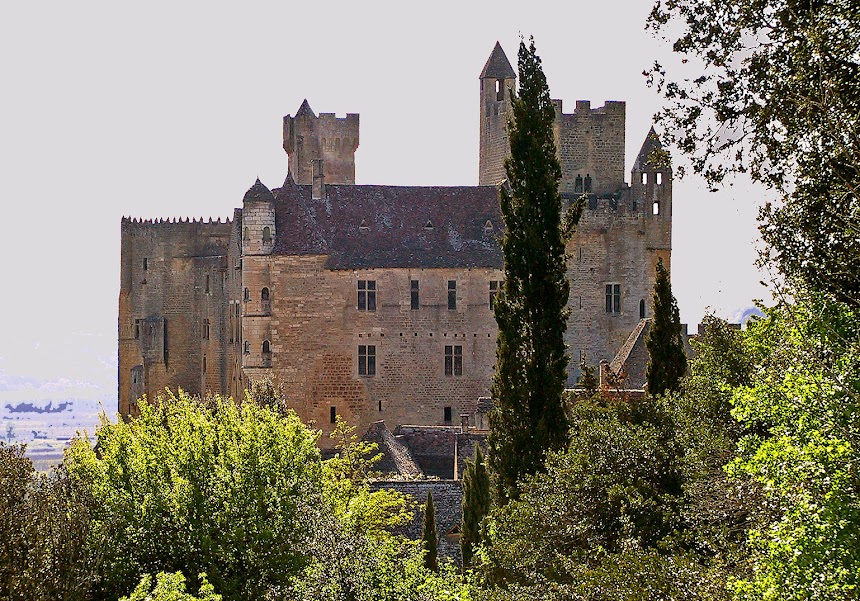 The château de Beynac is on the right bank of the Dordogne just north of Castelnaud. A guidebook I have says: "On a crag high above [the riverside village of Beynac-et-Cazenac] stands one of the most spectacularly sited castles in Périgord" — Perigord being the old name of the region that the Dordogne département is a part of. The château and its 13th-century donjon or "keep" overlook the river from 500 feet above it. During the Hundred Years' War, Beynac was loyal to the French monarchy. It was held by Protestant during the wars of religion at the end of the French Renaissance. My guidebook says it's open to the public, but "the interior is somewhat less impressive than the site itself." 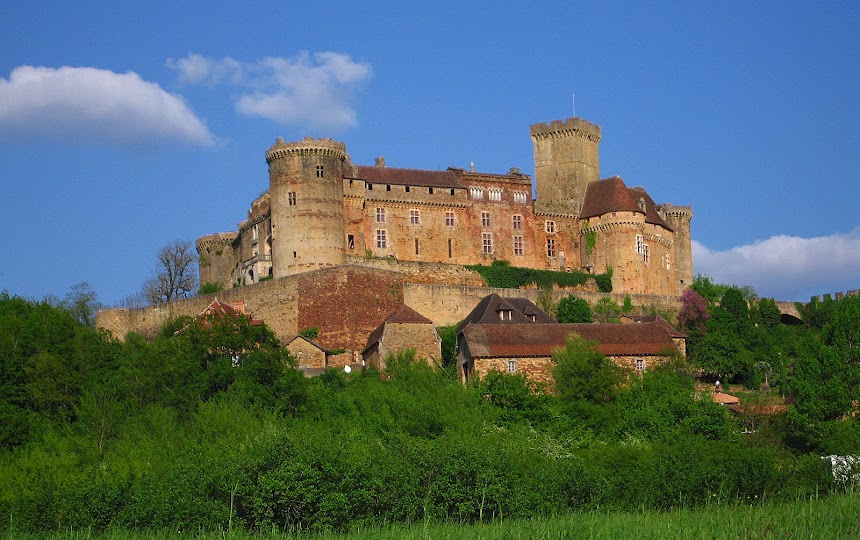 Farther east by about 50 kilometers, in the Lot département, is the château de Castelnau-Bretenoux, which is owned by the French government and open to the public. Its construction began in the 12th century and continued into the 17th. It was in English hands during the Hundred Years' War. The Castlenau family was first mentioned in documents as early as the year 860. Bretenoux (pop. 1,350 or so) is a nearby village that was founded by the Castelnau family in 1277 on the site of a settlement dating back to the 9th century. 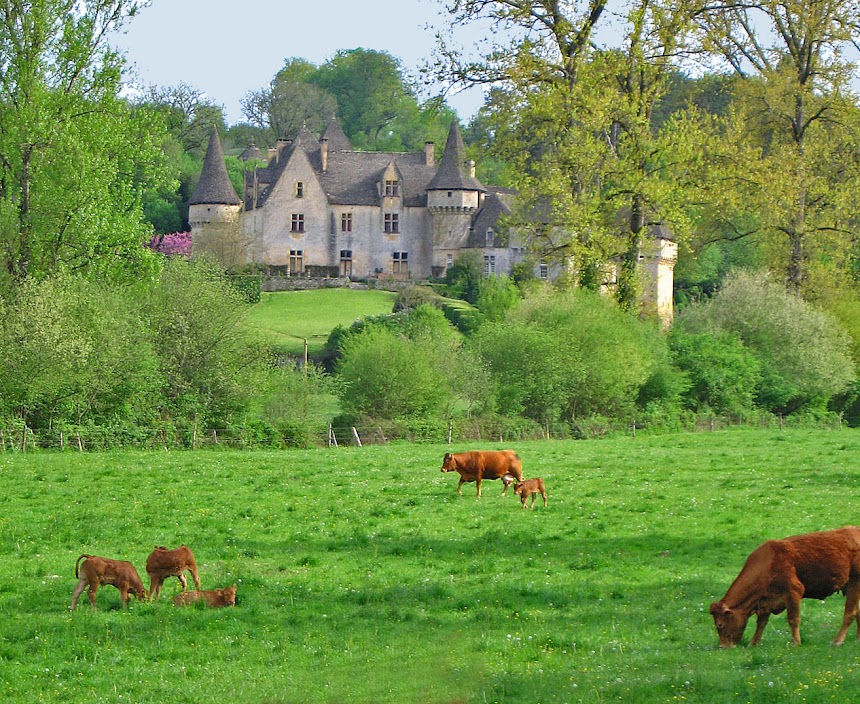 Finally, le château de la Grande Filolie is a 15th-century residence built on the site of an old mill that produced walnut oil. It's about 20 minutes north of Sarlat by car and is now owned by a Swiss man whose mother had American roots and bought the place in 1957. "She lived in New York and she never came to France," he said in this newspaper article. I suppose he meant "almost never"...
Posted by Ken Broadhurst at 06:57