The rue Montorgueil, where I lived from 1979 to 1982 when I was  working as a young teacher, ends or starts (depending on your point of view) at Les Halles, which was the old central market in Paris. In other words, it runs north from Les Halles, which is no longer a wholesale food market but has been transformed into France's busiest shopping mall. The central market dated back to about the year 1100. It was expanded many times over the centuries until it got so big and so busy with the advent of internal combustion engines — trucks and cars — that it had to be moved to a location outside the city proper. Pollution and congestion were choking the center of Paris. 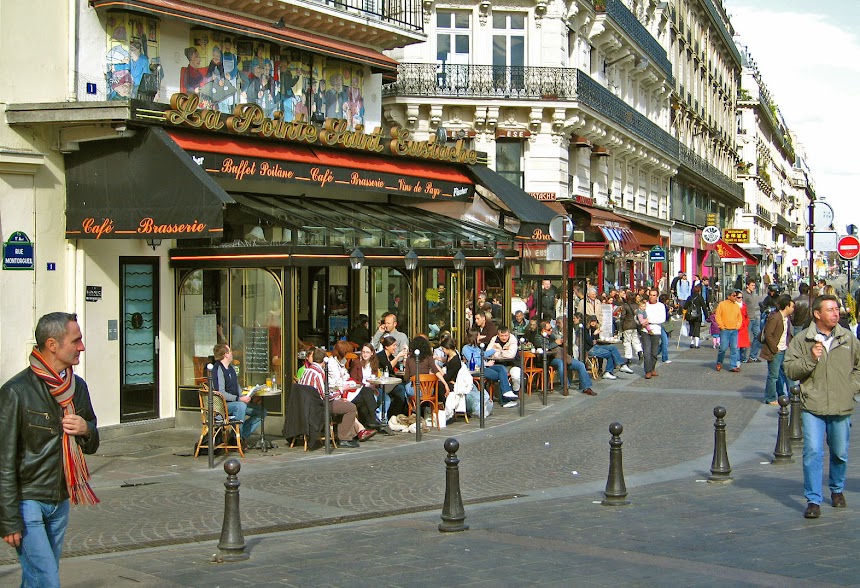 I was just reading about the move. I experienced it, though slightly. I first went to Paris in the winter of 1970. I was staying over on the left bank in the Latin Quarter, but I wanted to walk over to Les Halles to see it before it had been completely dismantled and relocated to the south suburbs. Frankly, I found the scene at Les Halles slightly intimidating. It was dark and crowded and noisy. It actually felt dangerous to a 20-year-old boy from a small town in North Carolina. I beat a hasty retreat and returned to the Latin Quarter, which was filled with young people like me engaged in more intellectual pursuits. 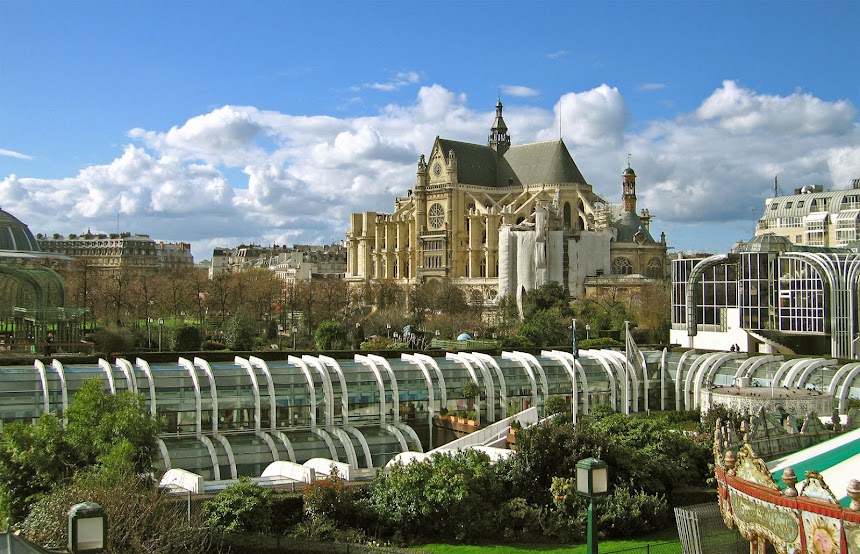 All the old steel market halls were taken down and removed in the first half of the 1970s. I was back in Paris in 1974-76, but I don't remember going over to Les Halles then. Again, my life was centered on the Latin Quarter in the daytime and on the western suburbs of Paris at night — that's where I had found an apartment to live in. The site that had been occupied by the city's wholesale food market (where butchers, grocers, cheese-mongers, and fish-mongers did their "shopping" to stock their shops with products they sold at retail in neighborhoods all over the city) had become a huge construction zone. The place it had occupied came to be called le trou des Halles — trou mean hole, as in hole in ground — because that's what it was. It was like a gigantic open-pit mine. Both a soon-to-be underground train station and a big also-to-be underground shopping mall were being built. Fearing that rats that had lived in and around the old food market would invade the surrounding neighborhoods, the authorities set out poisoned bait to attract and kill them. More than 20,000 rats took the bait. 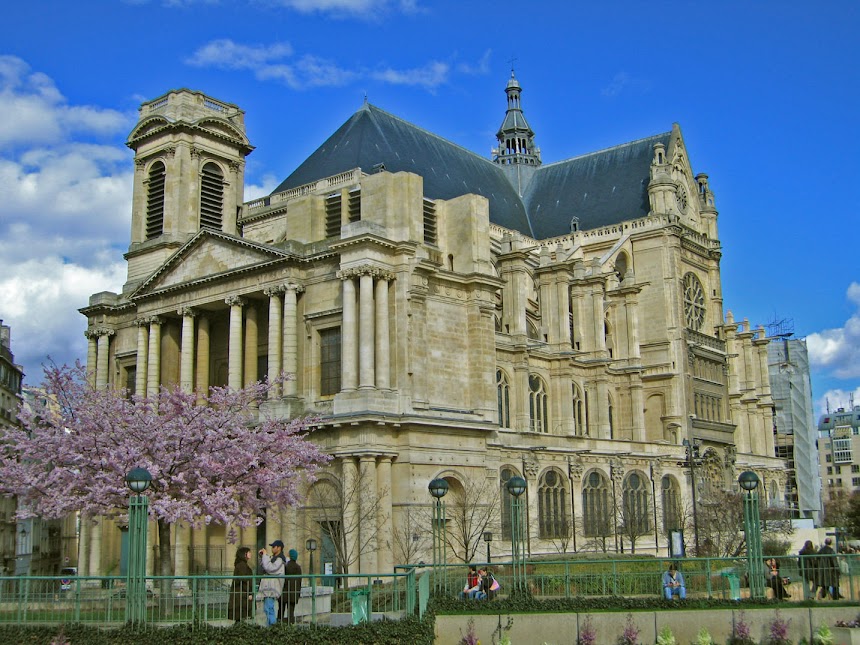 Work on the new complex continued into the 1980s. I returned to Paris in 1978 and spent a month in the neighborhood just north of Les Halles on the rue Montorgueil. I remember exiting the Châtelet-Les Halles metro station and walking on thick, long wooden planks through what would become a huge mud zone every time it rained — and it rains all winter in Paris. I returned to Paris in the fall of 1979 and lived in that same apartment north of Les Halles for three years. I "walked the plank" laid down in the mud nearly every day as I commuted over to left-bank neighborhoods to go to work at the Alliance Française and the École Nationale d'Administration. 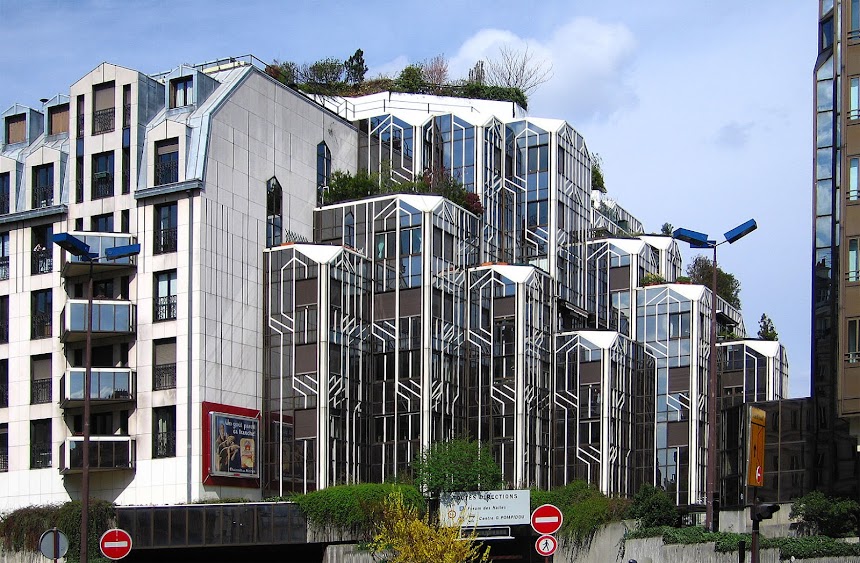 The shopping center called Le Forum des Halles had been finished, I believe, by 1981 or '82, but construction of apartment buildings and hotels was still under way all around it. Walt and I both returned to the U.S. in 1982 (we had become friends in Paris) and we didn't go back to Paris again until 1988, after we had spend four years working in Washington DC and then moved to California. We stayed in a hotel on the left bank near the Jardin du Luxembourg but we also went over to the right bank to explore the Les Halles neighborhood. The hotels and apartment buildings were finished, and a big part of the area had been turned into a pleasant park and gardens. 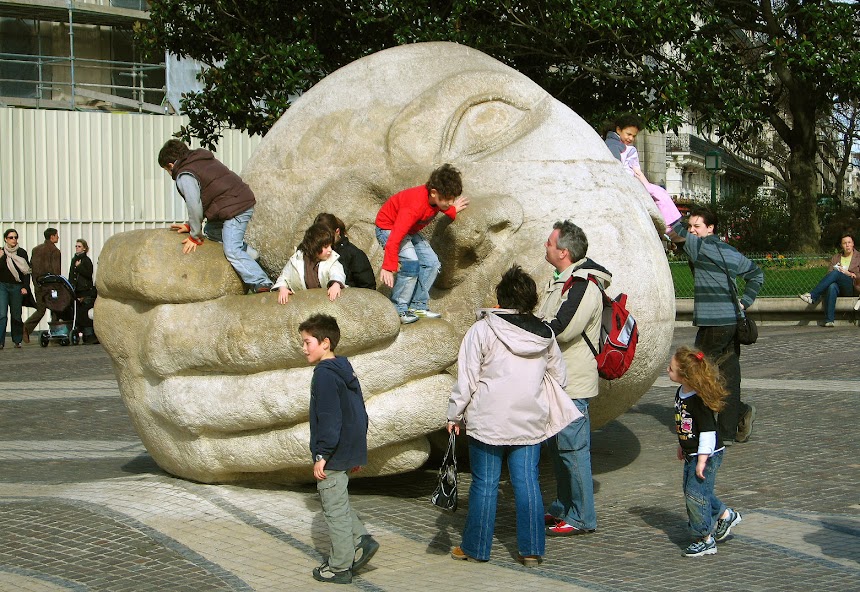 Walt was a student in architecture and urban planning at Berkeley, and he was taking a lot of photos. I hadn't yet been bitten by the photography bug. I remember a beautiful nighttime photo that he took in 1988 of the old church (called Saint-Eustache), which you see in my photos here, and which I took in 2006. It was hard to even recognize the Les Halles area at that point, after not seeing it for more than six years. And now it has been re-built and re-landscaped again. The Forum des Halles has a new roof over it. I haven't ever returned to see it since it was finished, even though we live only a couple of hours from Paris by train. Maybe one day... 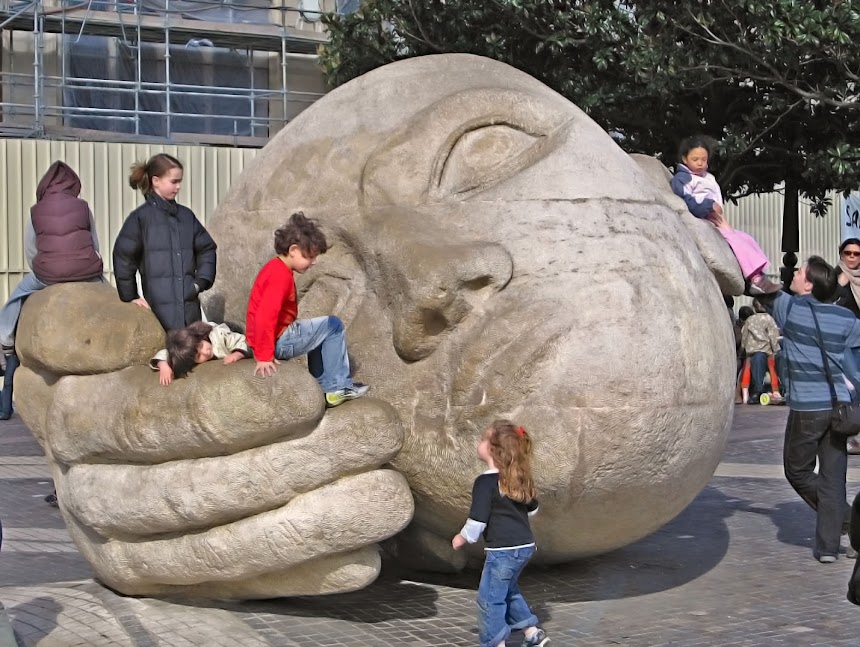 I did walk around the Les Halles area in 2013, nearly eight years ago now. It was again a big construction zone, but it was July and the weather was bright and sunny, so it wasn't so scary to see. Here's my post about the new construction from that trip. I also posted this photo of the work that was being done. Walt posted photos and text about the most recent Les Halles transformation in 2016. You might also be interested in this bilingual web page describing the sculpture above.
Posted by Ken Broadhurst at 07:02