According to legend, the town of Martel, located in the northwest corner of the former Quercy province, was founded by the grandfather of Charlemagne, a man named Charles Martel, in about the year 700. However, there is nothing in the historical record supporting that assertion. There are records of the town being founded in the 1100s as a ville nouvelle by the powerful Comte de Turenne, who held sway over northern Quercy at that time. 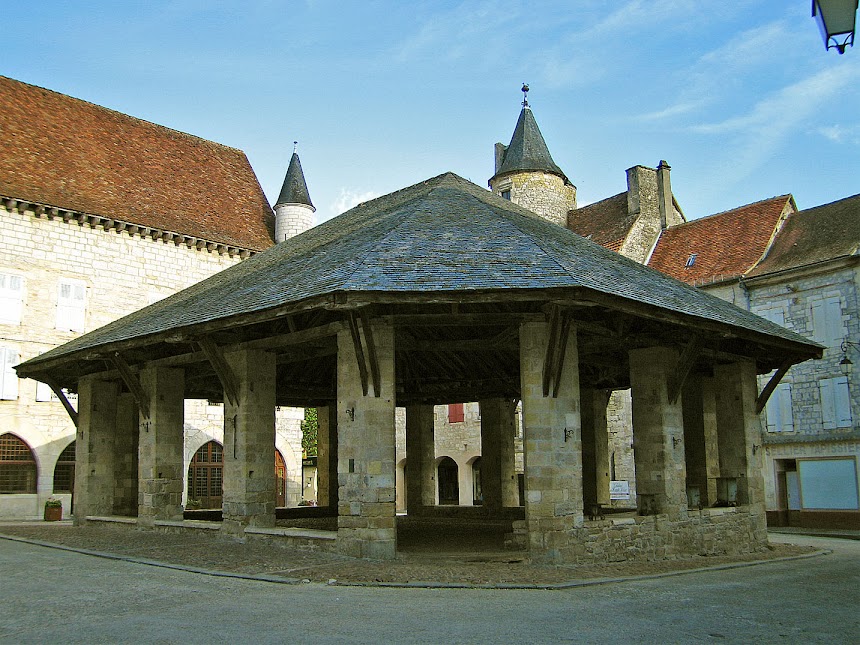 I liked Martel's market hall, which I've just learned was built only in the late 1700s, around the time of the French Revolution. Carpenters of that era were real artists when it came assembling roof structures using chestnut logs (below). Maybe it's not surprising that the name of the town, Martel, is the old form of the modern French word marteau, meaning "hammer". 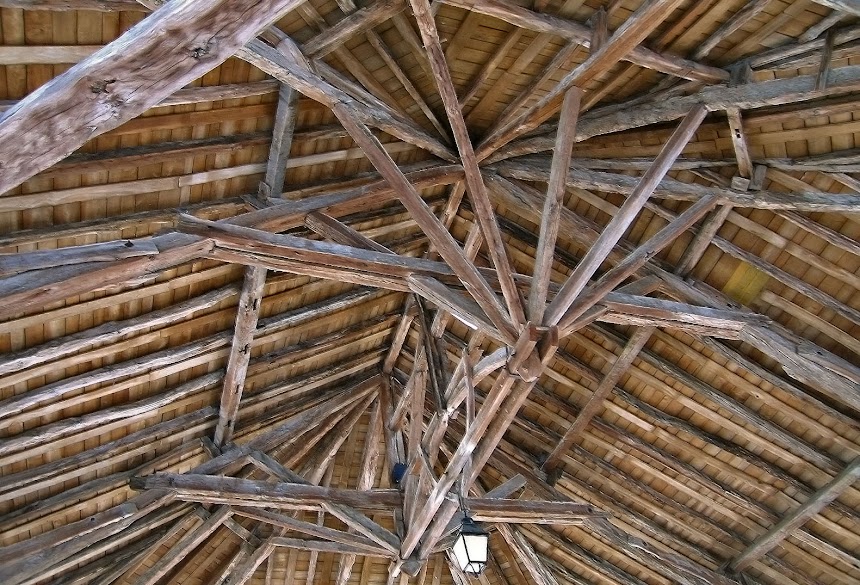 Other legends about Martel involve England's king Henri II Plantagenêt and his sons. None of the legends can be verified through historical records. So nobody knows if Henri II's son Henri le Jeune really died in Martel after pillaging nearby Rocamadour in the year 1183. Be that as it may, Martel is famous for its truffle market, as well as for its walnuts. Another Martel attraction is a vivarium called Reptiland, just on the edge of town. According to its web site, 100 espèces d'animaux, serpents, lézards, tortues, crocodiles, mygales et scorpions y sont visibles. Reptiland boasts one of the country's largest collections of venomous snakes. 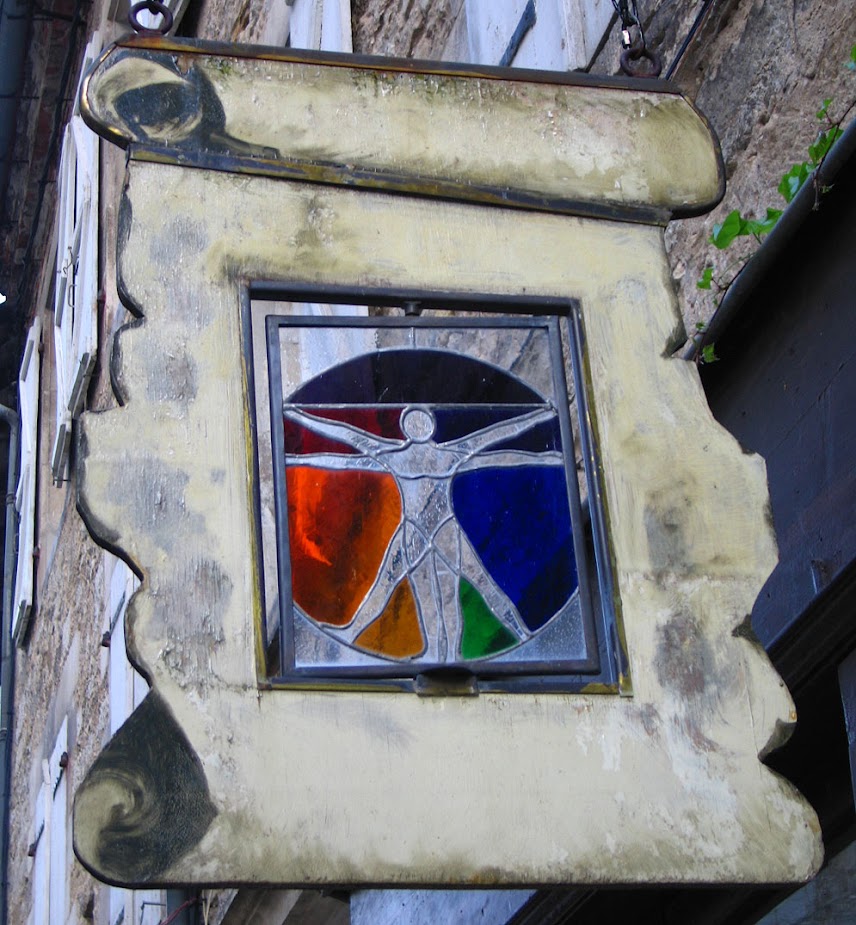 The population of Martel went into a steep decline toward the end of the 19th century, when residents numbered close to 2,600. These days, it's more like 1,600, having hit a low point (1,400) in the early 1980s. One web site I've looked at says that there are 725 résidences principales in the little town, and about 225 résidences secondaires (vacation homes). Another 200  houses or apartments stand empty (see some ads here). It's like that in many small French towns. 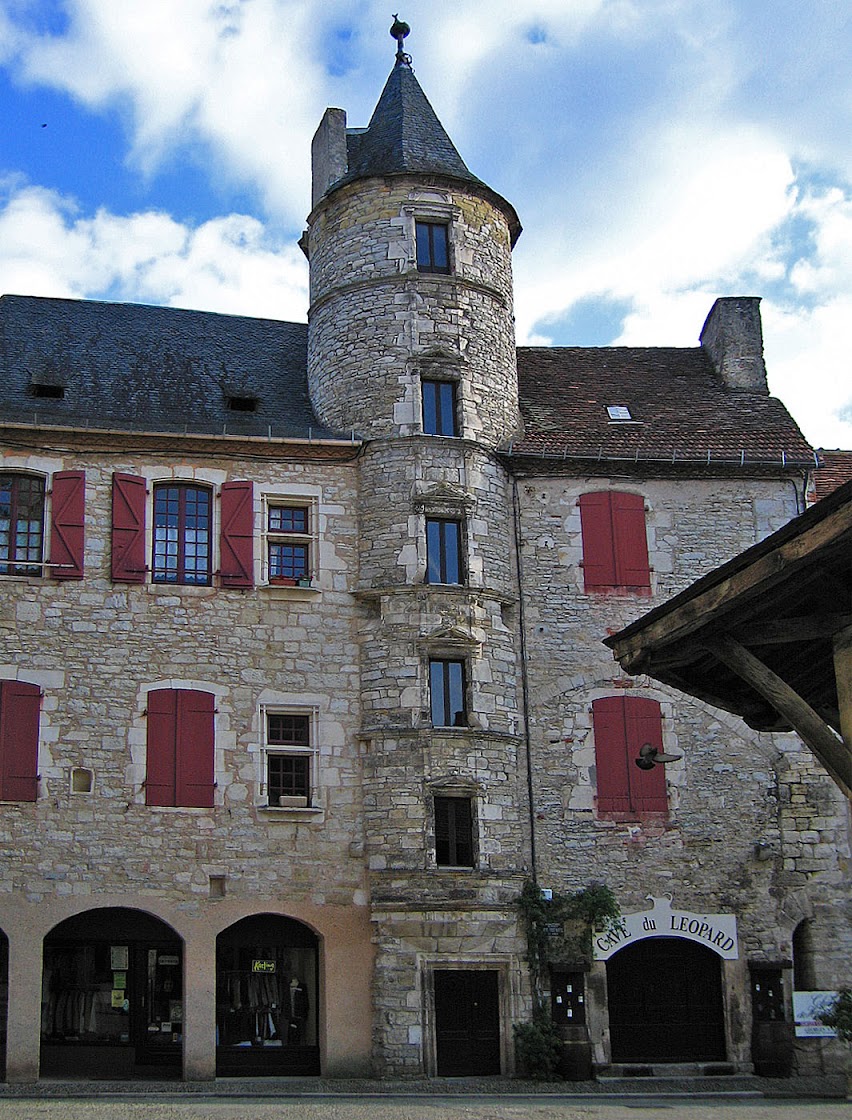 The impressive building above supposedly dates back to the end of the 12th century. The round tower sort of embedded in its façade contains a spiral staircase. Apparently, there is no historical proof that this building has stood here since the 12th century. That's another legend, according to what I've read. In legend, this is where Henry II and Eleanor of Aquitaine's son Henry Jr. was supposed to have died back then. More likely is that the building, called the Hôtel Fabri, was built or at least completely re-built between 1520 and 1580. 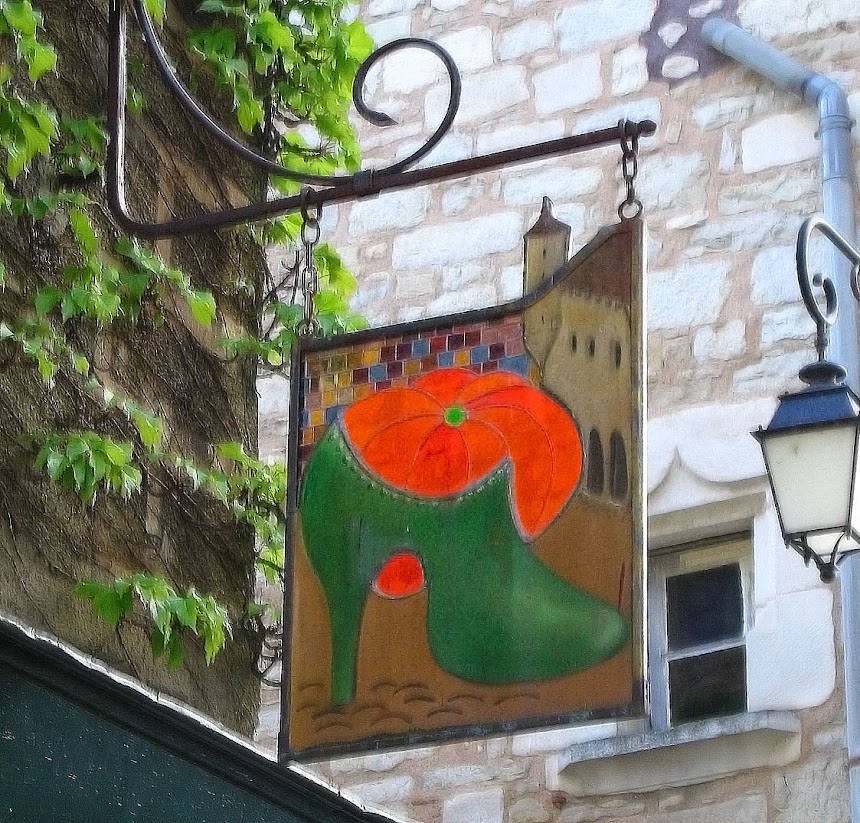 Some craftswoman or -man seems to have produced and sold a lot of stained glass signs to local merchants. I thought they were pretty nice. I hope I don't sound negative about Martel. I enjoyed seeing it and wish I had been able to go back again. The Cadogan guide calls the town "proud" and "staunchly medieval", adding: "...the population [of the town] isn't nearly big enough for Martel. However small, this is a real city, and, beautiful as it is, it wears a melancholy air with so few around to share its beauty." Martel is about 45 minutes from Sarlat by car. 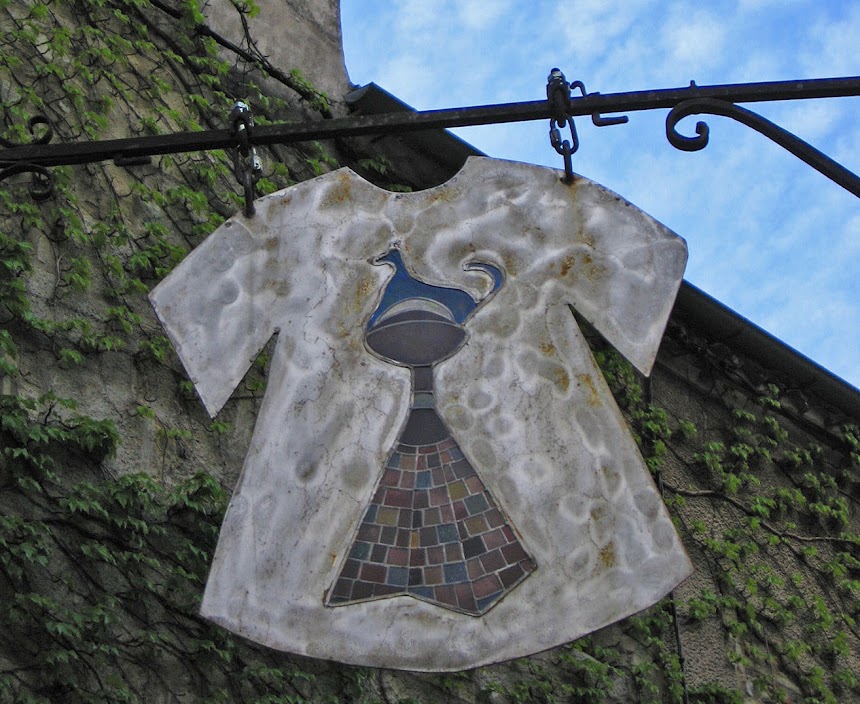