You get a second post today. Too often, I can't post about, for example, Christmas dinner or our New Year's Day lunch, until the day after we've eaten it, or started eating it. That's because the meal is usually not ready early enough in the morning to be on the blog until then. Today is the exception. 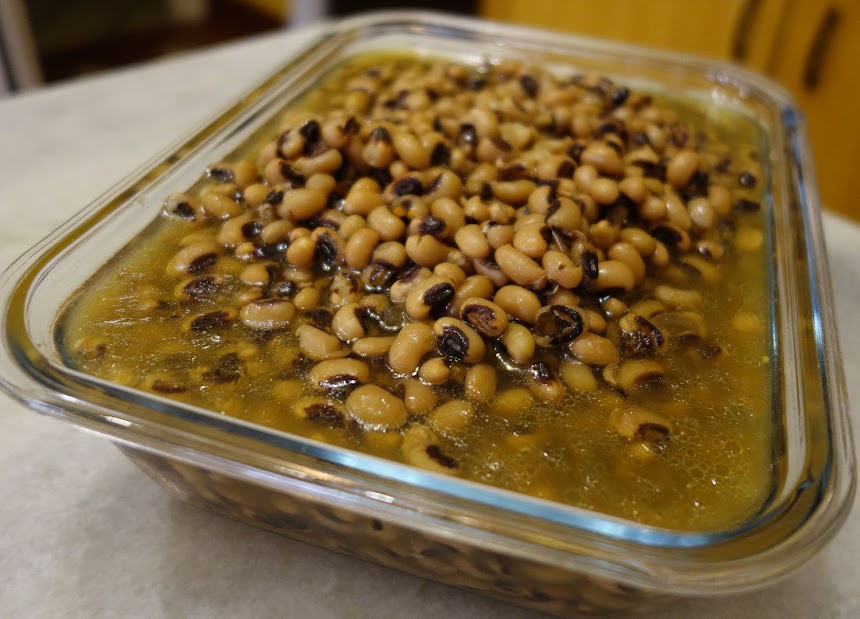 Eating black-eyed peas on January 1 is an old tradtion in the U.S. South, and in other countries and cultures as well, I believe. Here are my January 1, 2020, black-eyes, which I cooked overnight in the slow-cooker. (Can you believe I'm still thinking about food after last night's New Year's Eve extravaganza? Well, I am. I put a pound of dried black-eyed peas, called haricots cornilles in French but not well-known here at all — the ones I get come from Portugal, but there's no indication on the package as to where they are grown — in the slow-cooker yesterday evening without pre-soaking them. Soaking is not really necessary when you are cooking beans long and slow at a low simmer. 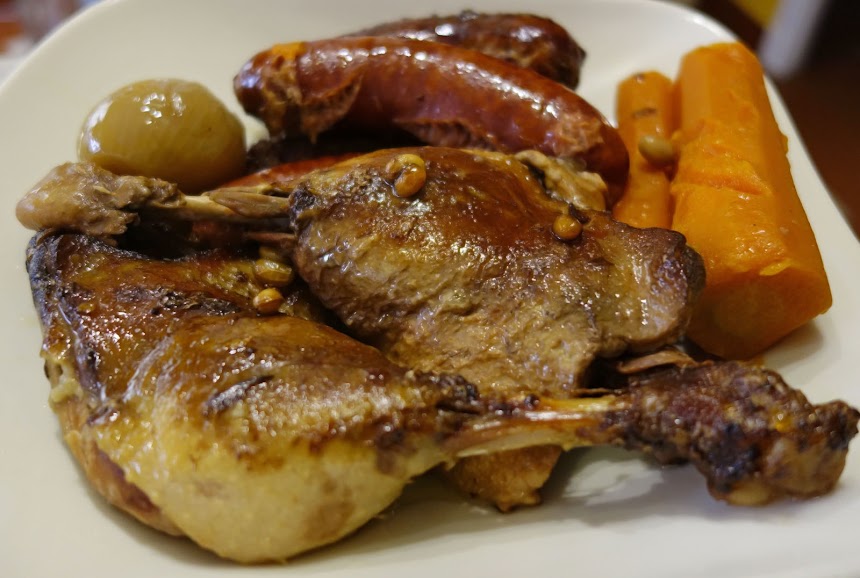 I added two duck leg & thigh pieces and four smoked pork sausages to the pot, with some bay leaves and black pepper, along with a carrot and an onion. No salt. The meats add a lot of flavor to the beans and broth. I let everything cook on the crockpot's Low setting for 12 hours. The beans didn't fall apart, and neither did the duck legs. Lunch is ready, but not yet served of course. I think I might make some cornbread to go with the beans and meats. And then brown the duck legs in the over for a few minutes to crisp them up before eating them.

One popular explanation for the South’s association of black-eyed peas with good luck dates back to the American Civil War. It has to do with General William T. Sherman and the march of the Union (Northern) Army he led from Atlanta to the sea. His soldiers pillaged the Southerners' food supplies. Stories say black-eyed peas and salt-cured pork were left untouched by the Northern soldiers, because they saw such foods as feed purely for animals and unfit for human consumption. Southerners, legend says, considered themselves lucky to be left with some supplies to help them survive the winter, and the January 1 meal of black-eyed peas evolved into a representation of good luck...

In another Southern tradition, black-eyed peas were a symbol of emancipation for African-Americans who had previously been enslaved, and who after the Civil War were officially freed on New Year's Day. Other Southern American traditions point to Jews of Ashkenazi and Sephardic ancestry who settled in Southern cities and on plantations and also ate black-eyed peas for good luck on New Year's Day.
Posted by Ken Broadhurst at 07:26