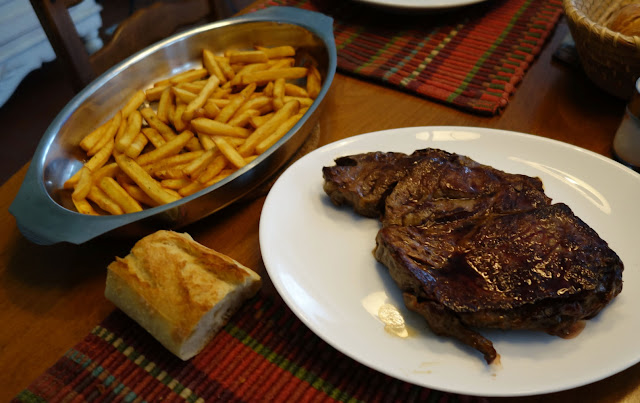 Now that I'm eating again, after my recent bout of food poisoning, I feel like I need foods that are fortifying. Steak, I thought. We had steak with a pepper-cream sauce just before Christmas (steak au poivre for Walt's birthday dinner), and I wanted something different. But first the steak. This one weighed 700 grams (1½ lbs.) and we of course did not eat it all in one sitting. 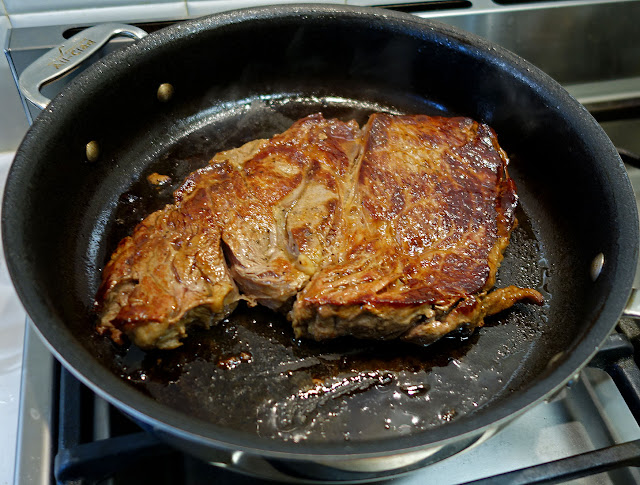 This is a cut of beef called basse-côte. When we first came to live here more than 16 years ago, I never saw this kind of steak in the supermarkets. I didn't even know it existed, so I never ordered it from the local butcher shops. It's what we call in the U.S. a chuck steak, I believe. It's not too expensive, and it's pretty tender. This one was sold as a basse-côte à griller — a steak to grill or pan-sear. Sometimes I see steaks called basse-côte à mijoter — meat for stewing that needs long, slow cooking. 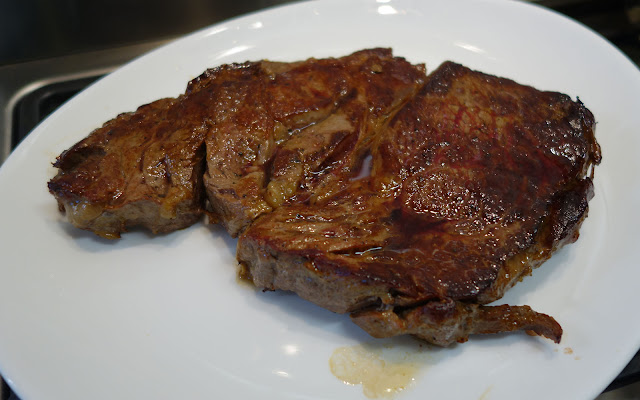 The Larousse Gastronomique says that the basses côtes are neck muscles from the first five dorsal ribs of the steer. Boned out, the basses côtes make for delicious stews (pot-au-feu, for example), braises, and beef burgundy. Cut into steaks, they are good grilled and are called entrecôtes parisiennes, which are not too lean and are very much appreciated by gourmets.* I guess we are gourmets, by that standard! 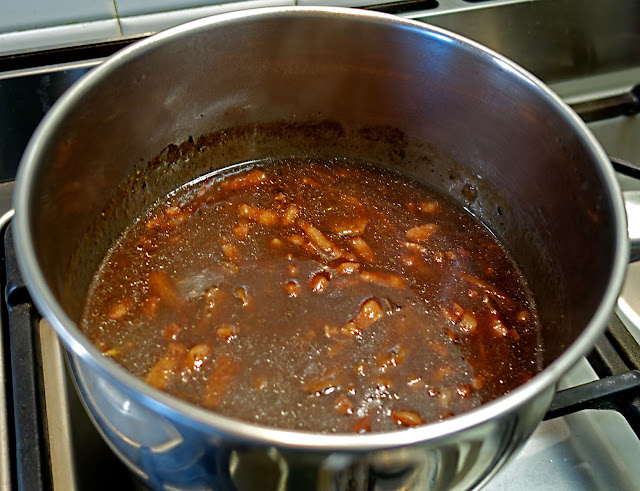 The sauce I ended up making to serve with the steak and some pommes frites was a mixture of mushrooms, lardons fumés (smoked bacon), shallot, garlic, thyme, bay leaf, black pepper, beef broth (from a recent pot-au-feu), and red wine. We had half a small jar of dried cèpes (boletus mushrooms), which I simmered in the beef broth by for 15 minutes or so. That gave good flavor to the broth. Then I sauteed the lardons with shallots, garlic, herbs, added the mushrooms, the beef broth, and some red wine and let all that cook slowly and reduce slightly for half an hour. Then I thickened it by stirring in a slurry of potato starch and water. 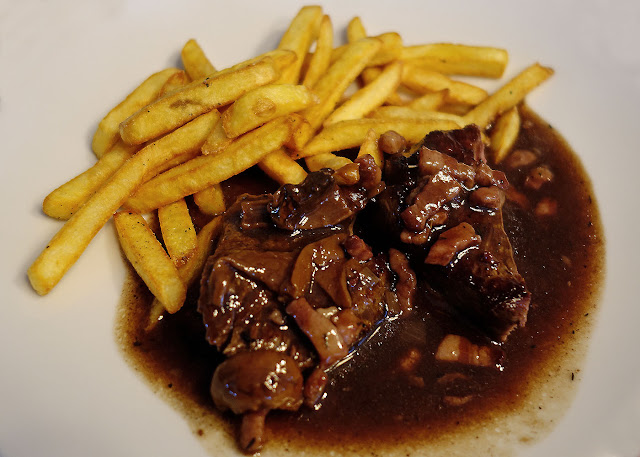 The steak I just seared in a pan with a lid on it, slightly askew. I didn't want to eat it too rare, because my system is still delicate after last week's illness. It only took 5 or 6 minutes on each side to cook the meat to medium, especially since it was mostly covered (to avoid making a big mess on the stove). When it was browned, I set the pan in a slow oven to continue the cooking for a few minutes while I heated the sauce back up and Walt made a batch of French fries. To finish the meal we had a salad of lettuce and betteraves (red beets) dressed with vinaigrette. And bread and red wine too, of course.