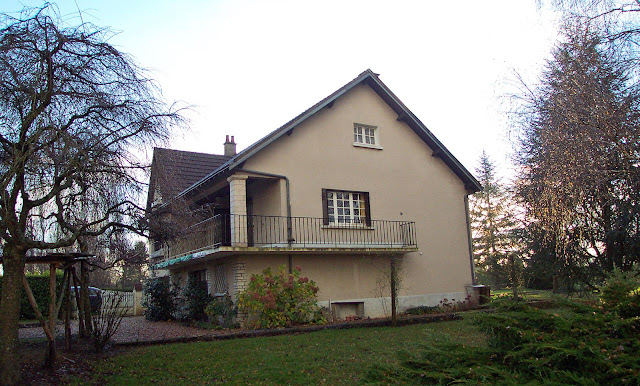 On that December day in 2002, we saw three properties in the Saint-Aignan area that were for sale. One was on the east side of the town, in the village called Seigy [say-ZHEE]. It was a big house perched on the side of a steep hill — nearly a cliff. The hillside had been landscaped at some point, but the "hanging garden" was completely overgrown and would need a lot of work. The house's so-called kitchen was an empty room with just a couple of pipes sticking up out of the floor. The house's upstairs level was partially finished but still basically an austere space that the owners gave over to their grandchildren as a game room. In front of the house, across a narrow road, was a fast-flowing stream (or ditch) that the owner of the house told us it would be our responsibility to keep clear of debris so that it didn't get blocked and overflow, causing flooding. That same man was selling the house because he had heart troubles and couldn't deal with its two or even three steep staircases you had to negotiate in order to live there. We passed on that one. We picked the house above instead. 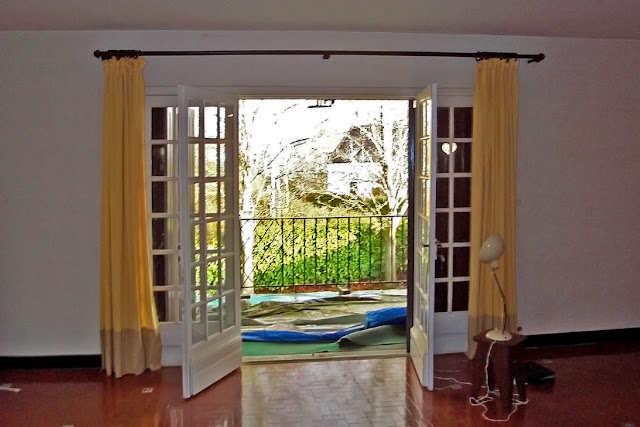 The other house we saw that afternoon was on the west side of Saint-Aignan in the village called Mareuil [mah-REUH-yuh]. It was on a hillside that was not quite as steep as the one in Seigy, but it was obvious that a back yard on such a slant would be very difficult to mow or even just walk around in (or on). The inside of the house was a significantly bigger mess than was the house we ended up choosing. Besides, this hillside house had a big unfinished basement space that was full of almost knee-deep water — there was a drainage problem and a lot of water flowing down that hill. We passed on that house too, even though it was within easy walking distance of the village center, where there was a good boulangerie (bread bakery) and a fine little supermarket. It was in a pretty setting but if you happened to stumble when walking around the yard you would probably roll down the hill and land in the front neighbor's back yard! We chose the house you see above, on its level piece of land — even with its wreck of a front terrace that would have to be repaired and re-surfaced right away. 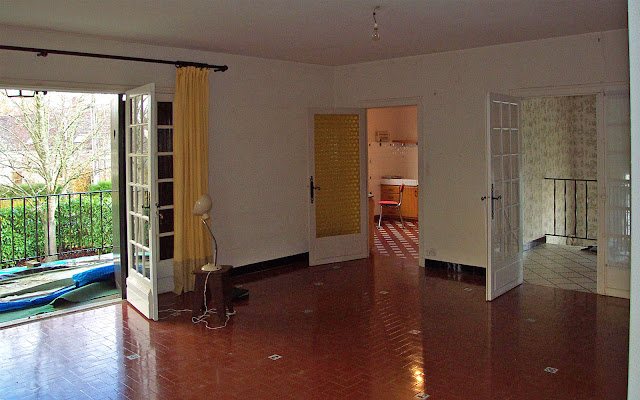 So house no. 3 was looking more and more attractive. It's half-acre yard was flat. It's big living/dining room was welcoming, with a big north-facing window and an east-facing, wide porte-fenêtre. The kitchen was serviceable, not requiring major work immediately and right next to what would become the dining area. The living/dining room and kitchen taken together made for a 525 ft² living area, and there was a landing where a couple of big pieces of furniture holding kitchen things would fit easily — another 50 ft². The stairs leading down to the ground-level entry hall were wide, not too steep, and very solidly built of the limestone material called travertine. In all, it was the most attractive of the three Saint-Aignan houses by far, even though with just two small bedrooms it offered less sleeping space than we thought we would need or want to have for overnight guests. We hoped to have a lot of friends visiting from America... 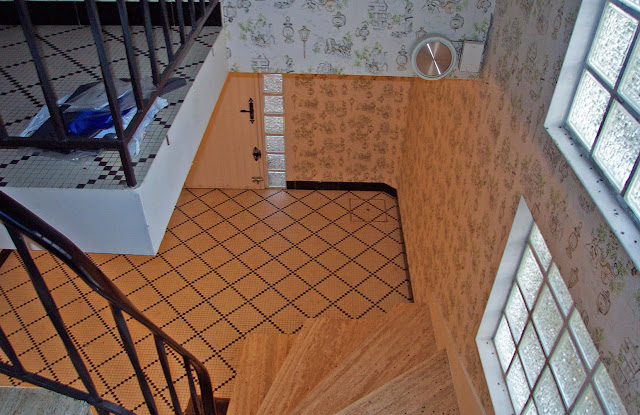 We had never heard of Saint-Aignan, as far as we knew, until the real estate agent in Montrichard mentioned it the day before and said he wanted to show us some houses around the town, which is about 15 km (10 miles) east of Montrichard on the south bank of the Cher river. He said we'd get more house for our money there. We were staying in a village called Pocé-sur-Cisse, which is across the Loire river on the north side of Amboise, 25 miles distant, and thought we might like to live in that area. Since the agent mentioned Saint-Aignan and couldn't see us until the afternoon of the next day, a Tuesday, I told Walt we ought to drive over to Saint-Aignan the next morning to see what it looked like. (Actually, a year or two later, we realized that we had passed through Saint-Aignan in 1989, when we took a week-long driving trip from Grenoble to Toulouse to Bordeaux and then north through the Loire Valley toward Chartres and Paris.) 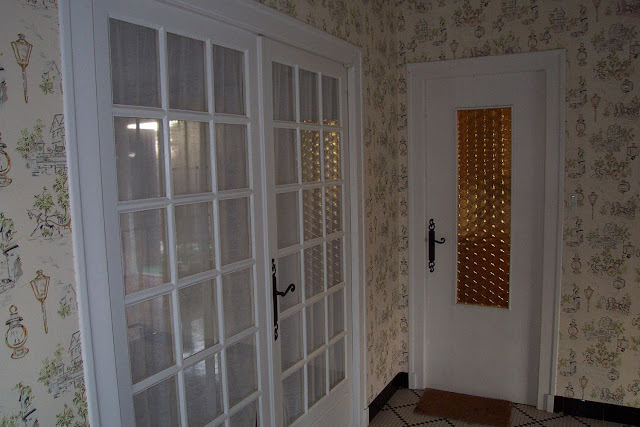 I feared that Saint-Aignan might be some kind of so-called ville nouvelle featuring a lot of medium-rise, low-rent apartment buildings, and terrible car and truck traffic. Maybe it was half-abandoned with a lot of shuttered store-fronts. Maybe it was in the shadow of a nuclear power plant or on the edge of big garbage dump. Well, it turned out to have none of those drawbacks. Instead, the town obviously had character, charm, and vieilles pierres, with a grand Renaissance château and an imposing Romanesque church. We had a decent lunch in a little restaurant near the bridge across the Cher for just 10 euros each, and talked about how we might have lunches there frequently if we ended up finding a house in the Saint-Aignan area. We relaxed a little and began to trust the realtor we were relying on to point us in the right direction and help us find a satisfactory house in a pleasant, convenient, not-too-remote area. 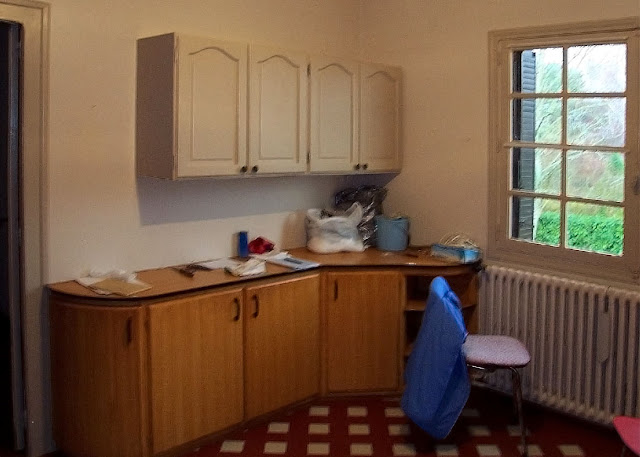 The photos in this post show (1) the north side of the house we've lived in for the past 17 years; (2) the double doors leading from the living room out onto the terrace; (3) the living room with views through doorways out onto the terrace, into the kitchen, and onto the stair landing; (4) a view down the travertine staircase to the ground-level entry hall; (5) the door from the landing into the kitchen and the double doors that open into the dining area; and (6) the wall of the kitchen across from the sink, with its few upper and lower storage cabinets. I think we decided on that December day that this might well be the house for us, and the next day we asked the realtor if we could see it again and take some photos before we left the Loire Valley to return to California. I took some of these photos on that Tuesday afternoon, and others two days later on Thursday, when we had more time to look around and talk about the possibilities. Those were exciting days. Adrenaline was flowing because of jet lag, and we were operating on very little sleep.
Posted by Ken Broadhurst at 06:30