I wouldn't actually call it pandemonium, but it certainly was chaotic. That's how I'd describe my trip to SuperU in Saint-Aignan yesterday. It all started with the first task I went there to accomplish: dropping off the package I was returning to a merchant in England. I had printed out and stuck on the shipping label provided by both Amazon in France and The IT Buffs in England — the two were identical. Even so, the SuperU clerk's bar-code scanner couldn't read the label. She said she didn't know if the DPD delivery driver would accept a package that couldn't be scanned. I left the package with her anyway, and I gave her my name and phone number so that she can call me if DPD refuses to pick up the package and ship it to England. Big sigh. When will this end?

What was especially chaotic at SuperU was the condition of the store. It seemed that nearly every aisle in the place was being re-stocked, which meant that employees with big palettes of bags, boxes, cans, jars, and bottles were in the way everywhere. I found some of the items I went there to buy, but there were several that I couldn't find. As a result, Walt has to go to the supermarket again today. He'll go across the river to Intermarché in Noyers-sur-Cher. I wish him better luck than I had. 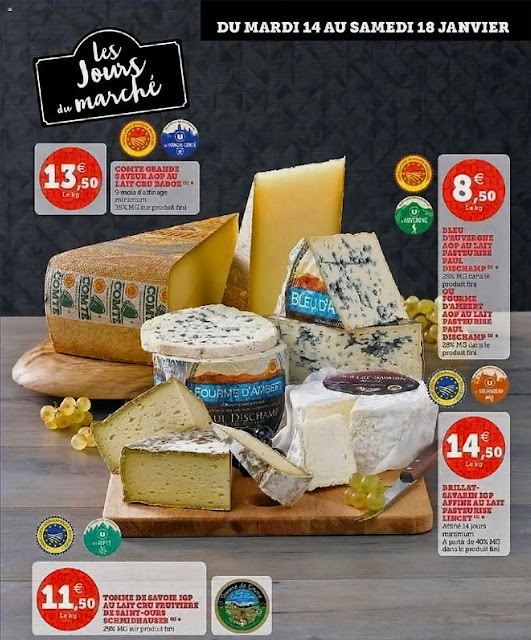 Meanwhile, here are some of the other cheeses on offer this week at SuperU. This ad shows Comté cheese for the same price I paid for Abondance yesterday. Blue cow's-milk cheeses from the central mountains of France, the Auvergne region, are considerably less expensive than Comté. One is called Bleu d'Auvergne, and the other is Fourme d'Ambert — Ambert is a town in Auvergne.


More expensive is the Burgundy cheese called by the brand name Brillat-Savarin, at 14.50€ per kilogram. It was "invented" toward the end of the 19th century. Another cheese from the Alps is called Tomme de Savoie, at 11.50€ per kilo. Both the Tomme de Savoie and the Comté are made from raw (unpasteurized) cow's milk. Different Tommes (or Tomes) are made in several mountainous regions of France, some from cow's milk and others from either goat's or ewe's milk. 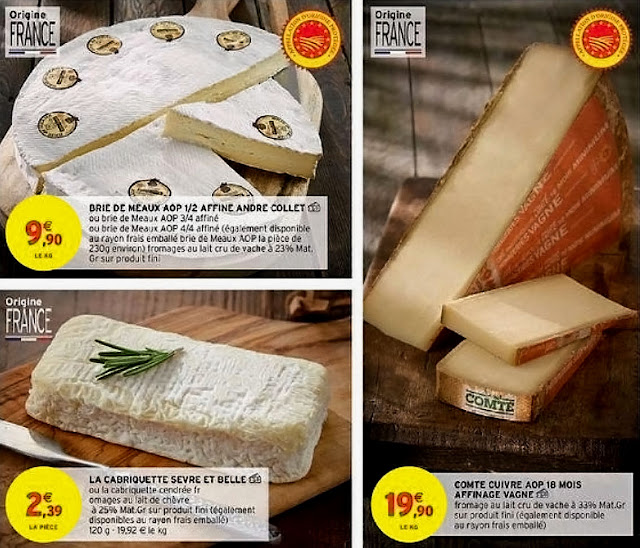 I mentioned Intermarché above. It's our other local supermarket and it also has a good selection of cheeses on special offer. This must be cheese season. There's Brie de Meaux, which is made in the area centered on a town east of Paris. Another variety of Brie is called Brie de Melun, produced southeast of Paris around the towns of Melun and Fontainebleau. Melun's style of Brie, which needs to be aged longer (un affinage plus long in French), is saltier and stronger-tasting than the Meaux style. Both styles are made from unpasteurized cow's milk. The two other cheeses here are a goat's milk cheese called La Cabriquette, and another Comté, this one aged for 18 months. 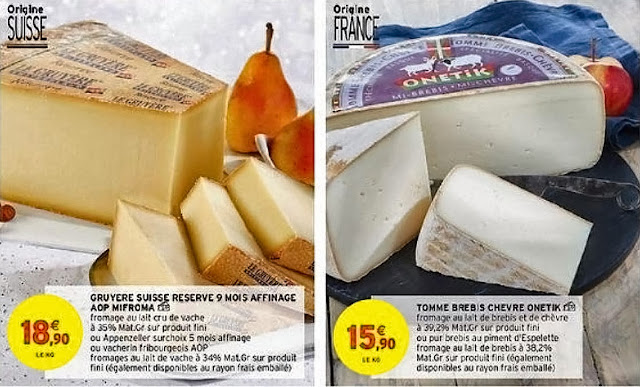 Finally, here's some real Swiss cheese, Gruyère Suisse, which is made in Switzerland from raw cow's milk and aged for nine months. A similar Gruyère is also made in France.

The very white cheese here is made from a mixture of ewe's and goat's milk. It's called Onetik and is made in the Basque Country of southwestern France, in the Pyrenees Mountains. It's aged for 2½ months and is said to be good with a glass of champagne.