I've mentioned before that our big pots of couscous broth usually turn into soup before we consume all the broth and vegetables. That's what we had for lunch yesterday. And now I realize that I probably shouldn't call this "couscous" soup — Moroccan vegetable soup would be a better name for it. Here's a spicy Moroccan vegetable and chickpea soup, with a recipe the author says can be varied at will. 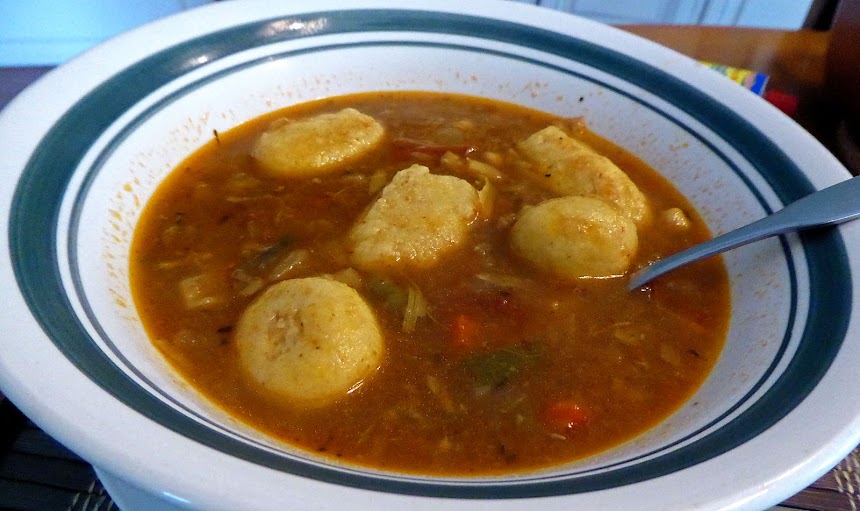 So what are those round-shaped yellow things floating in it? They're dumplings made with wheat semolina. I got the idea first from Thickethouse, who frequently comments on this blog. Dumplings are good in soup. And I made these with semolina, which is what couscous "grain" is made with. So the taste is about the same, but the texture completely different. Recipe below. (In French you might call them quenelles de semoule de blé.) 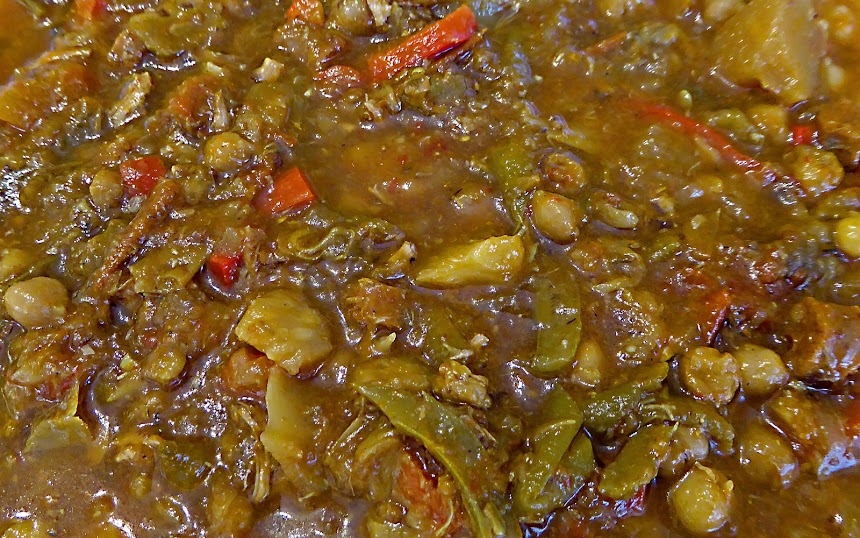 The vegetables in this soup include tomatoes, green beans, bell peppers, turnips, celery root, rutabaga, onions, zucchini, and eggplant — not to forget chickpeas (aka garbanzo beans). The other important ingredients are the Moroccan spices — powdered cumin, turmeric, ginger, nutmeg, coriander seed, cardamom, black peppercorns, caraway seeds, paprika, fennel seeds, and fenugreek. There's a commerically available Moroccan spice blend call ras-el-hanout that contains some or even all of these spices. Optionally, you can add some meat, and I did so because I had a few pieces of cooked veal and a couple of merguez lamb-and-beef sausages that I diced up and put into the soup pot. 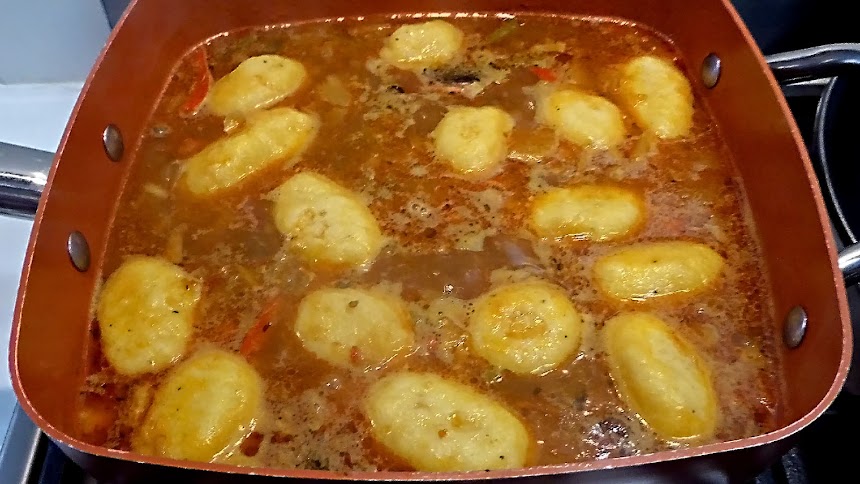 Put the softened butter in a bowl and stir it until creamy. Mix in the eggs, the spices, and then the semolina, little by little, to make the dumpling dough. Add the semolina in several stages and mix each time until you have a thick dough that can be shaped into dumplings. Add more than the quantity specified here if you need to.


Let the dough rest for 20-30 minutes, preferably in the refrigerator. With two spoons, form the dumplings — with one spoon, take a lump of dough out of the bowl, and with the second shape the dumpling. (If your dough is stiff enough, you can just shape the dumplings using your hands. That's what I did. I made 16 of them about the size and shape of new potato — smaller than an egg.)

You can either let the dumplings cook for 5 minutes in soup (you might end up with small pieces of cooked dough floating in the soup) or you can cook them separately in salted water or broth and then add them to the soup. The cooking liquid should simmer just slightly. Otherwise the dumplings might fall apart.


This dumpling dough very much resembles the dough we make for the fried cornbread called "hushpuppies." Next time, I'm going to make soup dumplings with that kind of cornmeal dough.
Posted by Ken Broadhurst at 07:20