I remember eating the dessert called a crème caramel in Paris restaurants and cafés back in the 1970s. I'd never had anything like that before. And the places I frequented were certainly not fancy restaurants — I didn't have that kind of income. Only years later did I find out that the Mexican flan is pretty much the same thing — an egg custard cooked in a baking dish, the inside of which has been coated with a dark caramel (melted, cooked sugar). 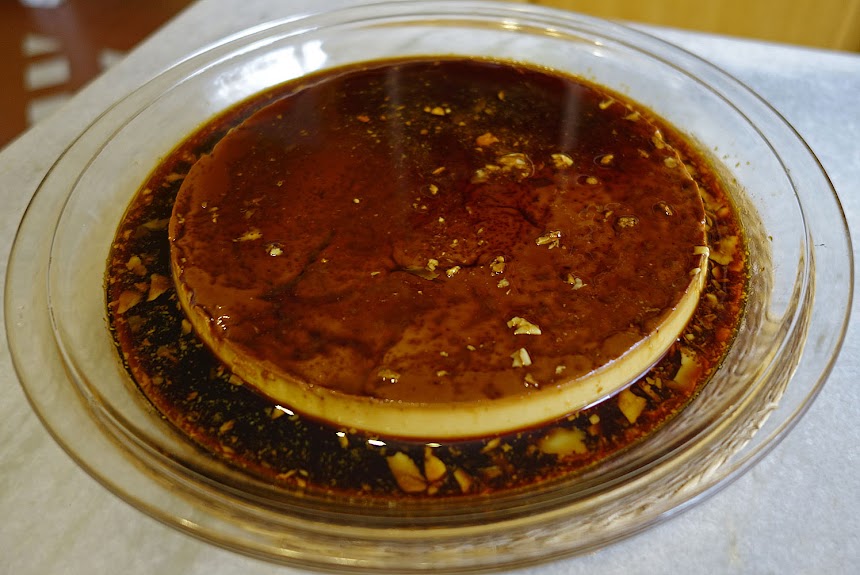 Since I seldom go to restaurants any more, I hadn't eaten a crème caramel in years. I decided to make one. It had been decades since I'd done so, I believe. Instead of cooking it in individual ramekins, I just made the crème caramel in a soufflé dish. We can cut wedges of it and drizzle on some of the liquid caramel sauce.


This is not a hard dessert to make — if you can get the caramel to work. My first attempt was a flop. I tried to make it in the microwave, directly in the soufflé dish I wanted to cook the custard in. But the caramel re-crystallized when I tried to thin it slightly by adding some hot water. I started over and made the second caramel in a pot on the stove, and then poured it into the soufflé dish and let it cool. That worked. It hardened pretty fast so I had to swirl it around quickly to cover the bottom and sides of the soufflé dish. 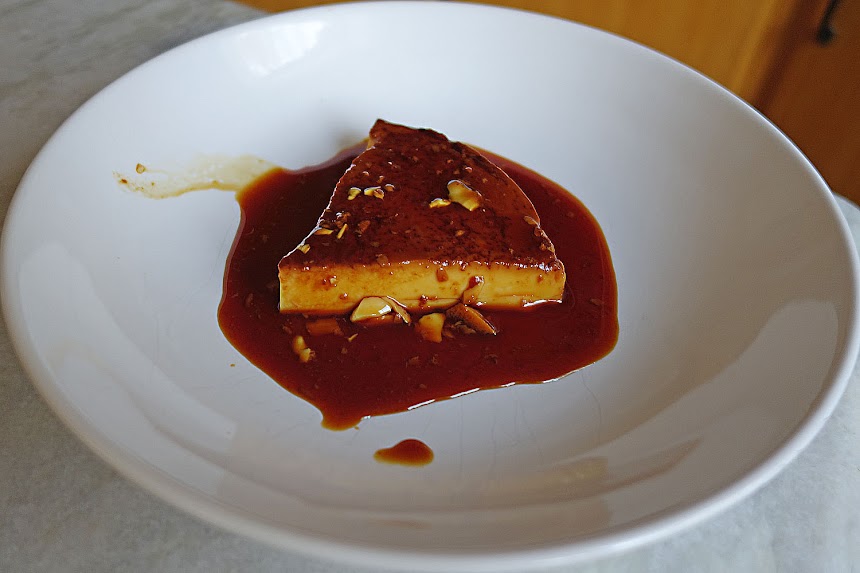 To make the crème or custard, bring half a liter of milk up to the boiling point on the stovetop or in the microwave (don't let it boil over!) Add some vanilla extract (in the U.S.) or a packet of sucre vanillé (in France). In a bowl, beat three eggs with 100 grams of sugar (half a U.S. cup – 8 tablespoons) until the sugar starts to dissolve (you can put in more or less sugar to taste). Then gradually pour the hot milk over the egg-sugar mixture, stirring it constantly with a whisk. Pour the crème into the soufflé dish that has hardened caramel on the bottom and sides. 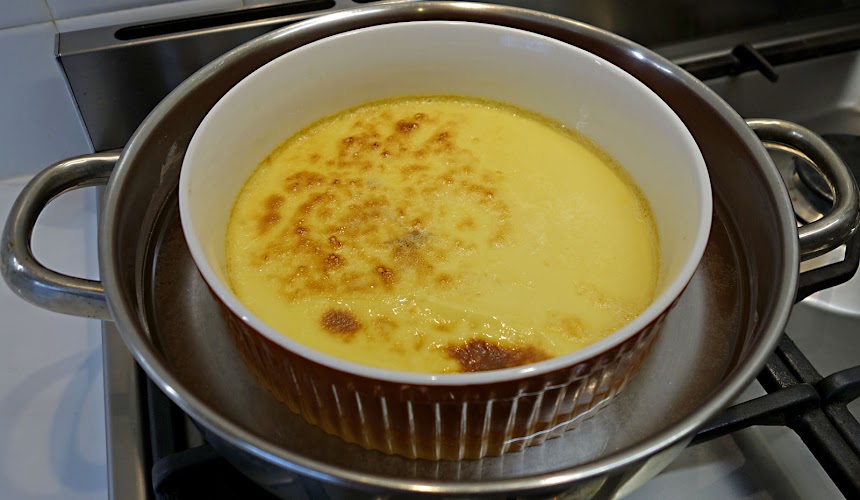 Set the soufflé dish in a pan of hot water — enough water to come halfway up the sides of the soufflé dish. This is called a bain-marie in French — a water bath. Put the pan in the oven at 180ºC (350ºF) for about 30 minutes, until the custard has set up and is no longer liquid. Test it with a skewer or the blade of a knife to judge whether it's cooked through. Then take the dish out of the bain-marie and let it cool for 30 minutes before putting it in the fridge for a couple of hours, or even overnight, covered.


Finally, when the crème caramel is completely cold, run a sharp knife around the sides of the soufflé dish to loosen the custard up. Put a shallow bowl or pie plate over the top and quickly flip the dish over. If you're lucky (and we were), the custard will fall neatly into the bowl or pie plate, and the caramel, completely liquefied, will run off the top of the custard and fill in around sides of the dish. Cut into wedges and serve cold.
Posted by Ken Broadhurst at 07:00