"Rain starting in one minute." That's what Accuweather says about the weather in Saint-Aignan this morning. The sound of hard rain woke me up sometime in the wee hours last night. That said, it's weirdly warm outside. As I mentioned yesterday, a strong, wet warm front is moving across France right now, and it's pushing drier, cold air off to the east. Where the two air masses meet, rain falls. 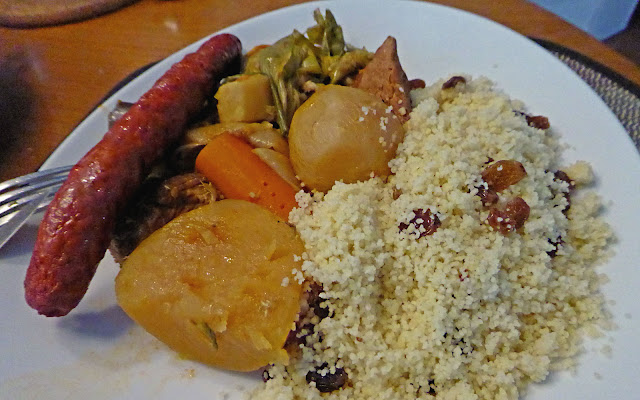 The warm front is going strong, but I've kind of run out of steam (as it were) with the couscous posts. It's not that we have finished eating it, but I think that I might make it into what we call "couscous soup" for today's lunch. That just means dicing up all the vegetables and meat, and maybe adding some water to the broth to make it a little soupier. On the right is the couscous as we served it a day or two ago. I hadn't yet sprinkled on some broth with harissa hot-pepper paste dissolved in it when I took this photo.

The second time we ate a lunch of couscous, I poured all the meat and vegetables into a big, shallow roasting pan so that we could better see which vegetables we wanted to eat with the couscous grain. Covered with aluminum foil, into the oven it went for a slow reheating. We cooked another batch of couscous grain to have with it. 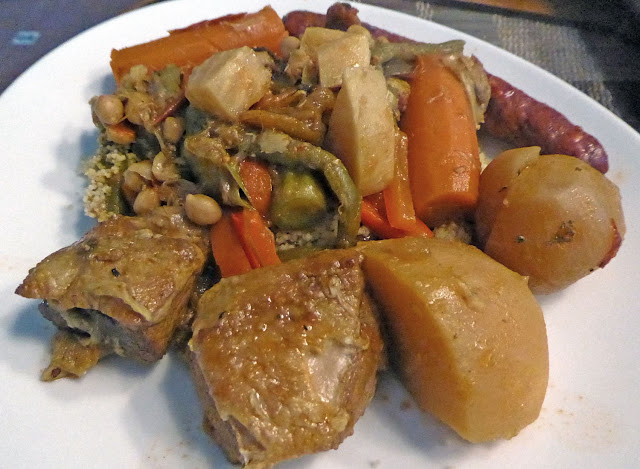 On the left is the couscous served with some of the broth and some harissa poured or drizzled over it. You can make it as spicy hot as you want with the pepper paste. As for preparation of the couscous "grain" in a steamer pot (couscoussier), here's what you do. It takes a while, and it's probably better if you use long-cooking rather than processed, pre-steamed couscous grain:

Fill the bottom container of the couscoussier (steamer) pot two-thirds full of water or broth and place it over over high heat.

When the liquid comes to a boil, set the perforated steamer basket containing uncooked couscous on top of the pot. Make sure the two containers fit together snugly so that steam rises up into the couscous grain and doesn’t escape out the sides. If the holes in the steamer basket are large enough that the couscous grains might fall through, line the basket with cheesecloth or a clean, thin kitchen towel.

Put the lid on the steamer basket. After about 30 minutes, take the grain out, pour it into a large flat dish, and let it cool slightly. Oil your fingers and work the grain to break up any clumps. Put the grain back in the steamer basket over the boiling liquid and repeat the process twice, not forgetting to work the grain with oiled fingers each time to to break up any clumps. After the third cooking, dot the couscous grain with small cubes of butter and serve it with vegetables, meats, and the spicy couscous broth. Optionally, mix plumped  raisins into the grain.

The above is a loose translation of instructions I found in the 1990s electronic Larousse Gastronomique food and cooking encyclopedia. The older 1960s print edition of the LG gives the following instructions as an easier way to prepare the grain:

For this method, you don't need a couscoussier pot. Moisten the couscous with a little water and wait for it to absorb the water and plump up. Then carefully pour the couscous little by little into about a liter of boiling liquid, preferably strained couscous broth — or just water, clear chicken or vegetable broth, or milk.

Stir constantly. Cook the couscous for about 15 minutes. When it's done, strain it and and dot it with butter. Serve it hot with stewed couscous vegetables and meats.

The third method is to follow the instructions on the package. For example, to serve two, put a cup of couscous into a saucepan. Pour a cup of boiling water over it and let it soak for five minutes to absorb the water. Stir with a fork to break up lumps. Add a little olive oil or butter. Serve hot. This method assumes you're using quick-cooking couscous grain, which is about all you can find dans le commerce these days. I've looked at amazon.fr for couscous that requires long, slow cooking, but I haven't found any. Here's another take on the whole couscous cooking issue.
Posted by Ken Broadhurst at 07:30