Doing it with duck

My car trip yesterday through Saint-Aignan and over to Faverolles-sur-Cher, across the river from the town of Montrichard, was therapeutic. It rained the whole time, and hard too. I went out for two necessities: I needed to go to the pharmacy and pick up some of my daily medications, because I was out. And I "needed" to go to see the butcher in Saint-Aignan who sells and prepares the best leg of lamb — gigot d'agneau — I've ever had. For years we've been cooking lamb for Thanksgiving, saving the holiday bird for our Christmas dinner. I have to get that gigot into the oven this morning. 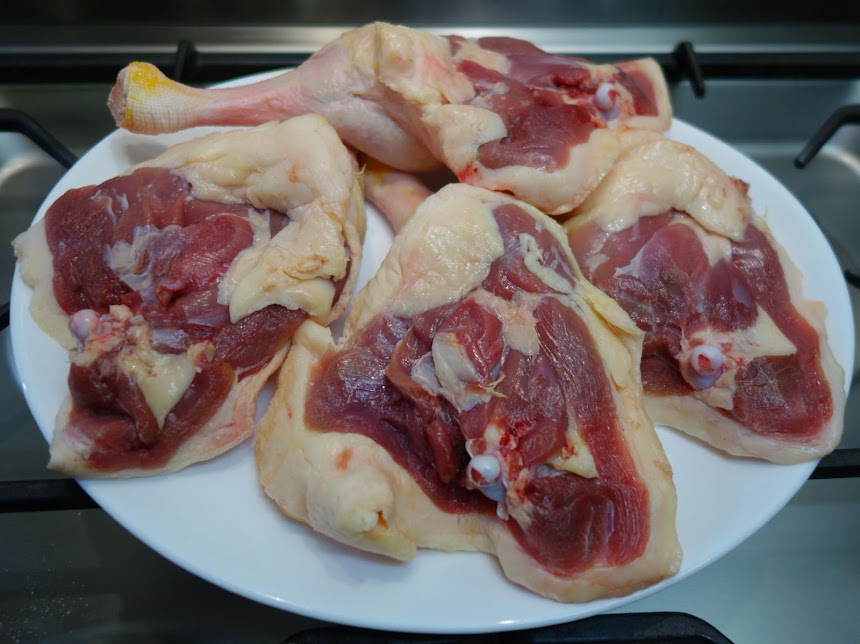 But birds were on my mind too, this year. In this week's supermarket flyers, which come with Monday's mail, I noticed that a supermarket in Faverolles-sur-Cher, Carrefour Market, was advertising a special on fresh duck legs (cuisses de canard) for 3.99 €/kilogram. Neither of our Saint-Aignan area supermarkets, SuperU and Intermarché, had duck legs as an advertised special. So I decided to drive over to Faverolles (pop. 1,400), which is 10 miles downriver from Saint-Aignan (and only about five miles upriver from the Château de Chenonceau), to buy some duck. 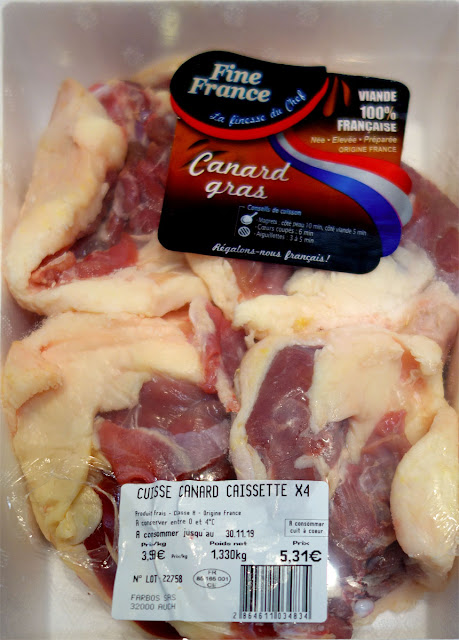 I already had a plan for cooking the duck, and it would be an experiment. Buying the duck leg-and-thigh pieces would be a good way to get some delicious duck without a big layout of cash. At approximately  $2.50/lb., what was there to lose? I bought eight legs, weighing a total of five pounds (2.2 kg).

Besides, going to get the duck would be a good opportunity to take a drive in the country, through fields, villages, and forests — a sure cure for cabin fever. It rained, again pretty hard, all the way there, but that was actually pretty too. The fields are green, a lot of trees are sporting gold and red autumn colors, and the villages are picturesque and sleepy-looking.


My idea for the duck legs and thighs? Well, as far as I'm concerned, there's nothing new under the sun (the question "What sun?" pops into my head). I decided I wanted to make a batch of N.C.-style "barbecue" but with duck rather than pork. "Barbecue" in North Carolina is synonymous with "pulled pork" — meat slow-cooked and then shredded and seasoned with barbecue sauce. I often make "pulled turkey" when turkey legs and thighs are on special, and it's just as good as pulled pork in my opinion. "Pulled duck" is bound to be even better. 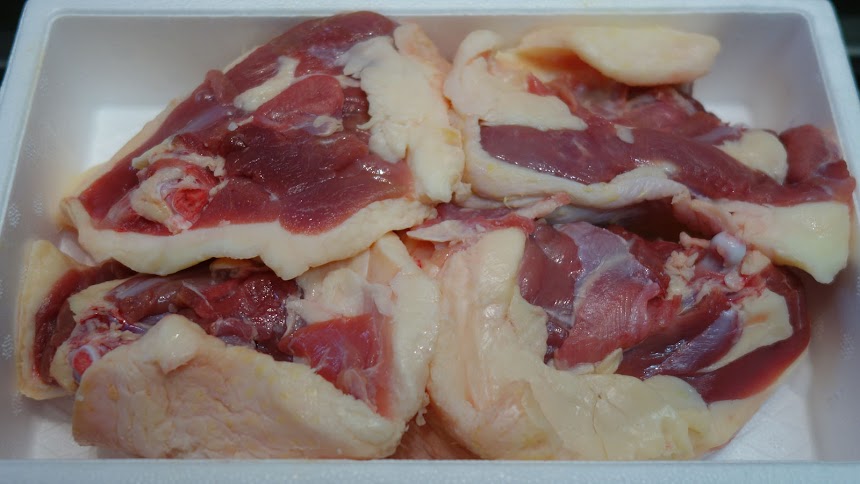 To make "pulled" meat, I cook it in the slow-cooker (la mijoteuse) because I don't have a smokehouse on the property here. Even in N.C., a lot of the barbecue restaurants now use electricity or gas to cook meat (mostly pork, of course), and smokehouses are soon to be completely phased out because they contribute so much to air pollution. Only the few restaurant-owners who have been cooking pork in smokehouses for decades are still allowed to do so. My understanding is that those few do are not allowed to pass on the right to cook smoked meat over oak or hickory coals to their heirs or to people who might buy their restaurants from them. 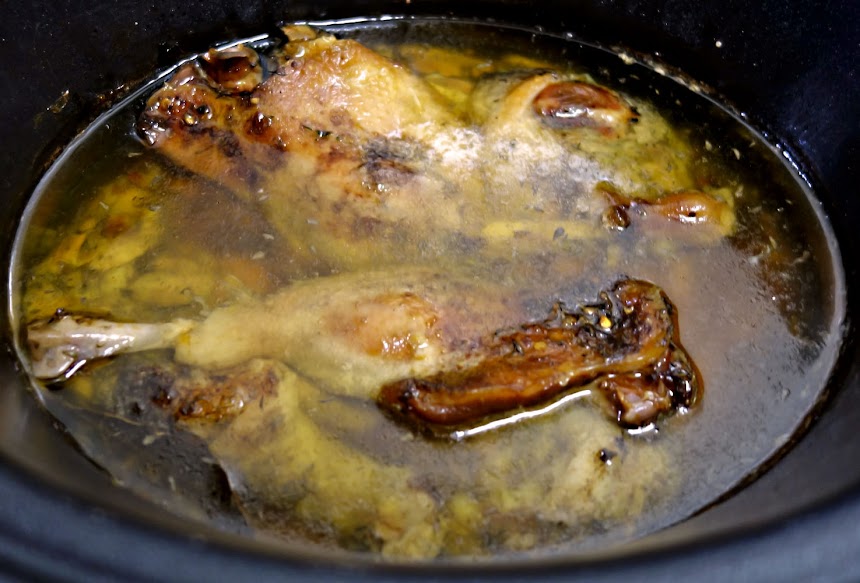 Here's what the cuisses de canard look like this morning, after slow-cooking overnight. I guess they're not very appetizing yet, but just you wait. Duck makes a lot of fat when you cook it, but that's a benefit, not a negative thing. You can use the duck fat to season vegetables or for frying potatoes, for example. They say duck fat is a healthy fat. To season these duck legs before their slow-cooking, I put in onion, garlic, bay leaves, thyme, allspice, smoked paprika, and white wine. I have to get them out of the cooker, let them cool, and then chop and shred the lean meat, saving the fat for other nice treats. The meat will go into the freezer for now.