I woke up at six o'clock this morning after sleeping for nine hours. Before going to bed last night, I had been awake for 33 hours straight, traveling. During those 33 hours, I drove a car for 3½ hours, flew on a plane for about 8 hours, and rode on a train and then in a car in France for 3 hours. That means I spent a lot of hours just waiting, after 4 hours packing and preparing to start the trip. I spent many hours waiting in airports (about 8) and of course about 7 hours awake, unpacking and talking with Walt about what each of us had been doing for the past two weeks, after I got back to Saint-Aignan. I just rested as much as I could, but I waited until my regular bedtime before surrendering to sleep so that I might shake off the jet lag as quickly as possible. 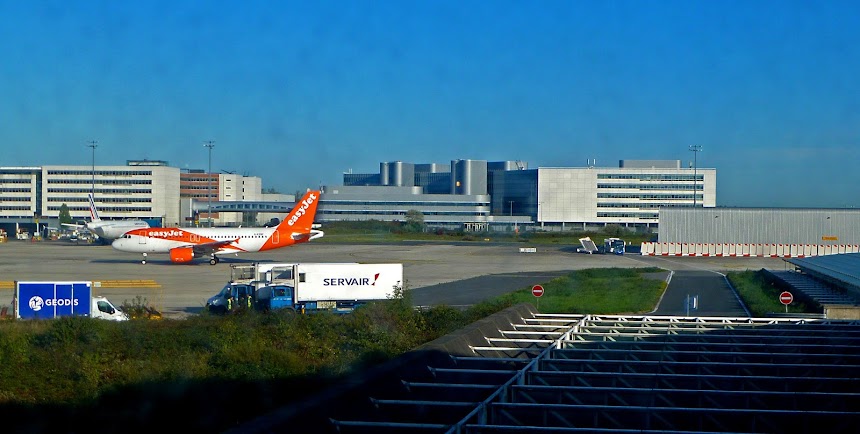 All that, and it was a good trip. The weather was beautiful for my drive in North Carolina. I managed not to get lost, and I was interested to see how fast N.C. is changing and modernizing these days. My  flight from RDU to CDG was smooth much of the time, with only a little bit of bumping and bouncing (rough air) at certain points. We landed a few minutes early at Paris-CDG airport, at 7:15 a.m., and my suitcase was one of the first ones to come down the chute and land on the conveyor belt at baggage claim. I went and had croissants and hot tea for breakfast before catching my train to Tours at 11:20. Above you see the view I had from my table at the café where I had breakfast. Below is a photo I took from the TGV when we were about to arrive in Tours — it's a pretty Touraine village north of Vouvray. The contrasts between the old and rural, in the Loire Valley, and the new and modern, around Paris, are striking. 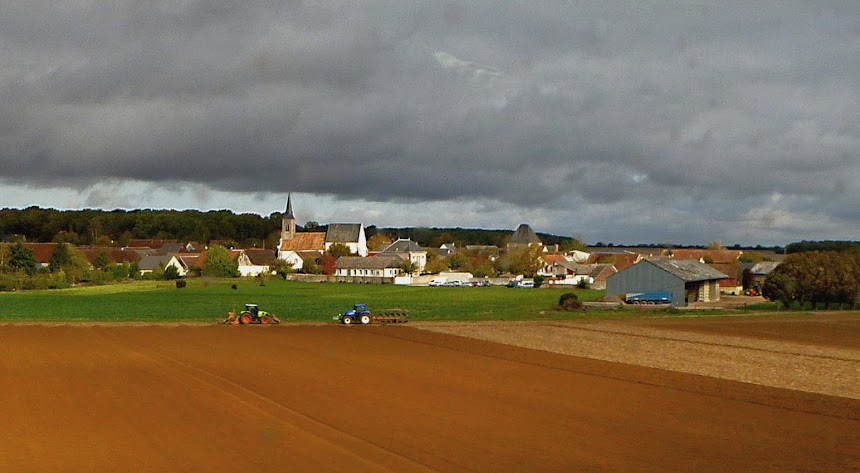 I had spent my last full day in North Carolina at Bayview cemetery in Morehead City in the morning, seeing my grandparents' graves one more (and maybe last) time. At noon, my sister drove over to the beach to meet up with our cousins Sandy and Andy, who had driven there from their house 90 minutes south, near Wilmington. Together, we took a walk on a nature trail at Fort Macon State Park and sharied news as well as memories of other times. Actually, it seems like I spent much of my time in N.C. sharing news and memories with my sister and several cousins that I grew up with in the 1950s and 1960s. It was amazing how complementary our memories were. Some of us remembered certain details that others had forgotten or never been aware of, and others remembered different details and events. We were piecing our family history together, and enjoying doing it. 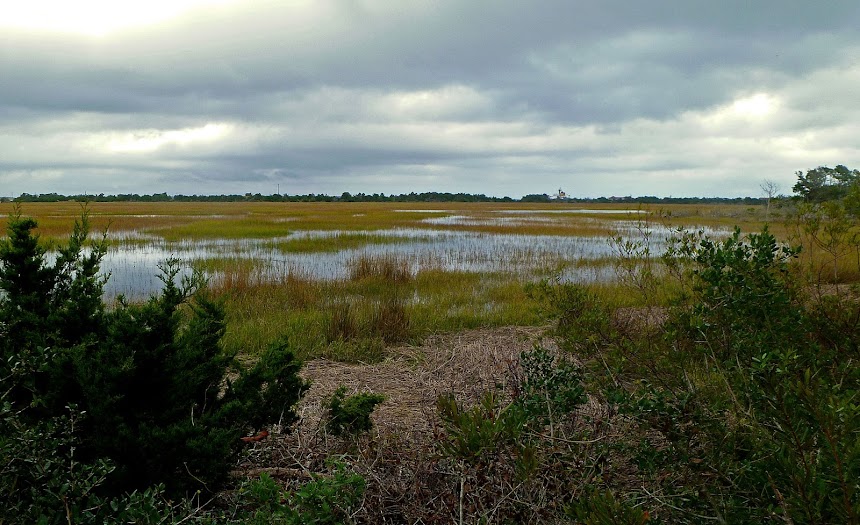 Above is a typical Carteret County, N.C. landscape. Or "waterscape". It's an expanse of salt marsh that lies behind Bogue Banks near Beaufort Inlet. As I've said before, Carteret County consists of much more water than land, and the land there is basically at sea level. Tropical hurricanes have caused major flooding in the area three times since 2016. Many parts of the county are still recovering from wind and water damage. But the place retains its natural beauty. 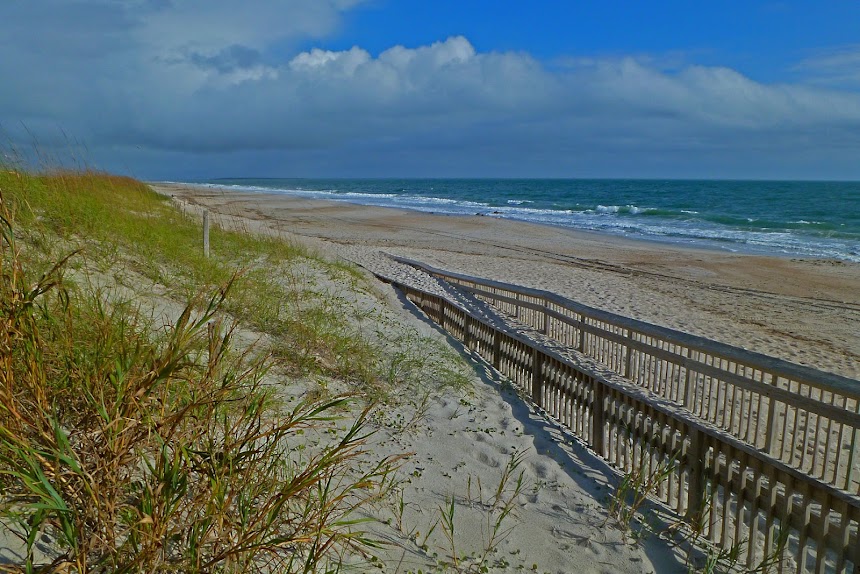 After climbing over the dunes on a boardwalk at the state park, we took pictures of the beach and the ocean not far from the condominium I had rented for a week's stay during this trip. I'm really glad I decided to go to N.C. one more time. The trip gave me an opportunity not only to share stories and memories with family members but also to show the place to our friend Sue from California. She experienced all the kinds of October weather people there live with, from calm, sunny days that feel like summertime, to windy, wet days that feel like autumn. Not to mention seeing the salt marshes, beaches, ocean surf, and the extensive waters of the sounds and estuaries of the N.C. coast.
Posted by Ken Broadhurst at 08:00