I dehydrated five or six trays of little tomatoes this week. It took about three days for them to dry out completely. This is all I got, but the dehydrated tomatoes pack a lot of flavor in a very compact form. After the tomatoes are dried, I pack them in jars and heat the jars up in the oven so that the lids seal. They'll last over the winter this way. 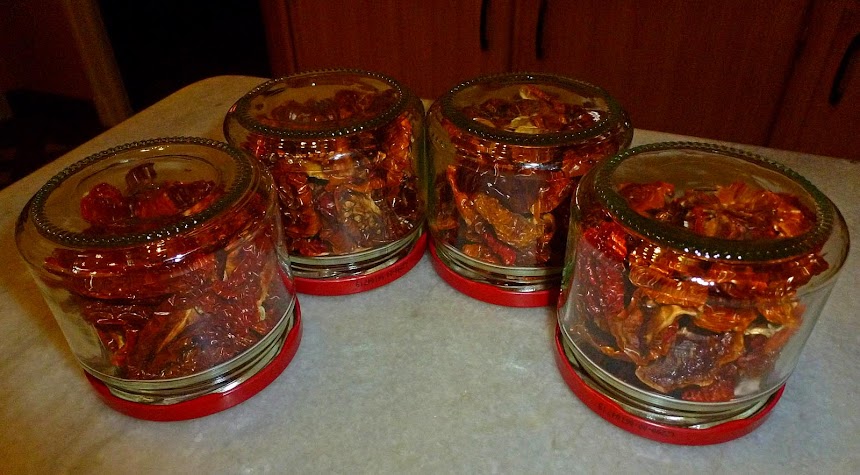 And I use them. I actually cooked some from last summer — about the quantity you see in one of these little salsa jars — in a batch of tomato sauce yesterday, to enrich it. I made the sauce with onions, spices, herbs, and lamb, using a container of 2017 tomato sauce from the freezer. The lamb was a gift from our neighbors across the street, who had more than they could eat. It was nice slices of cooked leg of lamb, and the meat sauce I made will go into a nice moussaka-style eggplant gratin that I'll be cooking today.

The tomatoes I dried are both yellow ones and red ones. Most of the red tomatoes in this batch were the little long ones that you see in the photo above. They are volunteers from a 2017 plant that re-seeded itself and came up in this year's garden. We don't remember what variety of tomato these were. But they are meaty and good, and don't have a lot of seeds or juice in them.
Posted by Ken Broadhurst at 06:00