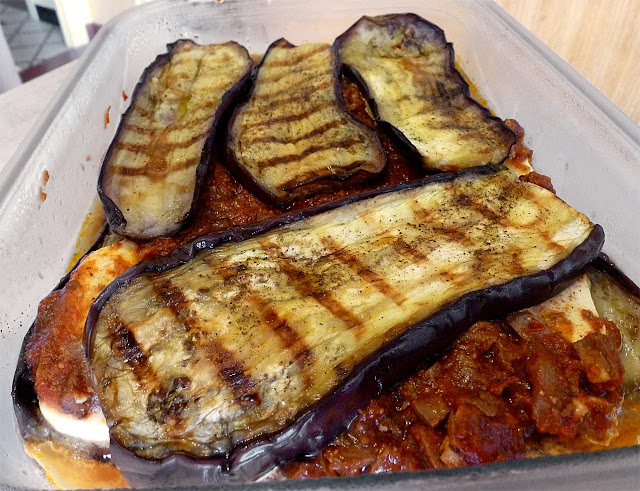 Let me finish up with a few photos of the grilled eggplant moussaka I made over the weekend. I realize that I also made moussaka in July, and I've made moussaka in different ways several times since 2010 and posted about it. I guess it's one of my favorite kinds of food. 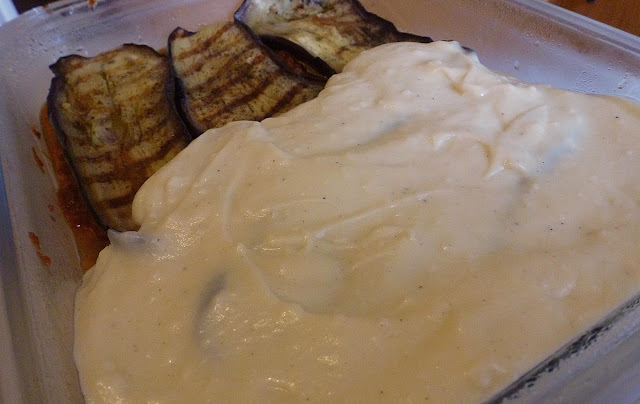 Grilling thick-cut eggplant slices seems to be the tastiest way of preparing them for baking in a moussake sauce. Frying them seems pretty oily to me, and it makes a mess on the stove. Baking them in the oven after brushing the slices with olive oil and sprinkling salt, pepper, and even herbs like thyme on them is good too, and less messy. But grilling gives them great flavor.
I call this one "three little aubergines in a blanket."

I put mozzarella slices in layers in this moussaka, but I'm not sure I would do it that way again. I think some grated Swiss-style cheese like Comté, Gruyère, or even Cheddar would be better. Mozzarella has a lot of water in it, and that water is released as it melts. Then the moussaka meat sauce is a little too liquid. It tastes good, but the moussaka can get too soupy. Here is the moussaka ready for the oven. 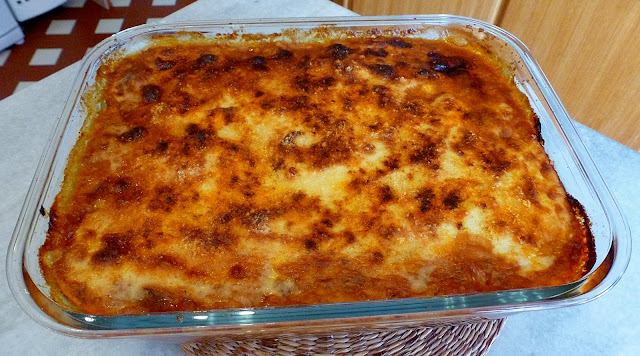 I made a white sauce to cook as the top layer of this moussaka. It's actually a sauce Mornay, which is what a white sauce with melted cheese in it is called in French. Instead of starting with a butter-and-flour roux, I made the roux with olive oil and flour. I got that idea from a Julie Andrieu show about making moussaka that I found on Youtube, and I like the result. It gives the recipe a more Mediterranean flavor. I sprinkled on some grated Parmesan and some smoked paprika before I browned the moussaka in the oven.
Posted by Ken Broadhurst at 06:00