I've found another way to prepare and enjoy zucchini. In some recipes I found on line over the weekend it's called a tian de courgettes, and in others it's called a gratin de courgettes. A tian, by the way, is a Provençal baking dish, and by extension, the summer vegetable concoctions (aubergines, courgettes, tomates, oignons, ail) cooked in it. The base is cooked zucchini, and rice stands in for pie crust. (See recipes in French here and here.)

This tian or gratin is a lot like a quiche, I think, because it includes eggs and cheese. The nice thing about it is the way you prepare the zucchini. Following and adapting the two recipes, mostly for proportions and the method, what you do is peel and scrape the seeds and pulpy centers out of a couple of big courgettes. Save just the firm courgette flesh and cut it into big chunks. 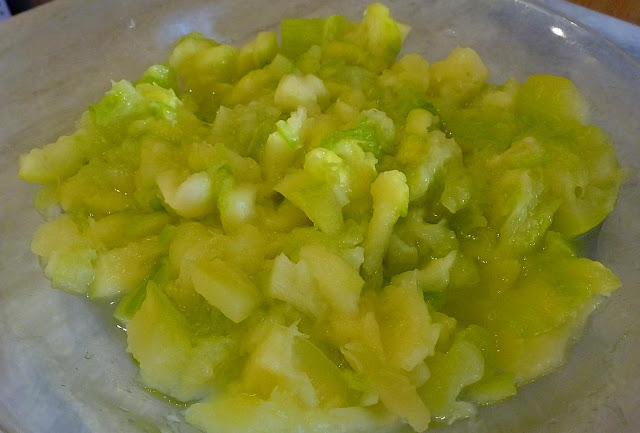 Cook the zucchini pieces in a steamer for a few minutes, until they are fork tender. Then take them out and mash them a little with a big fork. Actually, I used a potato masher. Don't puree the zucchini flesh — you want some chunks of it left in the mixture. I had about 850 grams of zucchini flesh —  nearly 2 lbs. To that, I added about three-quarters of a cup of steamed rice and stirred it in well. 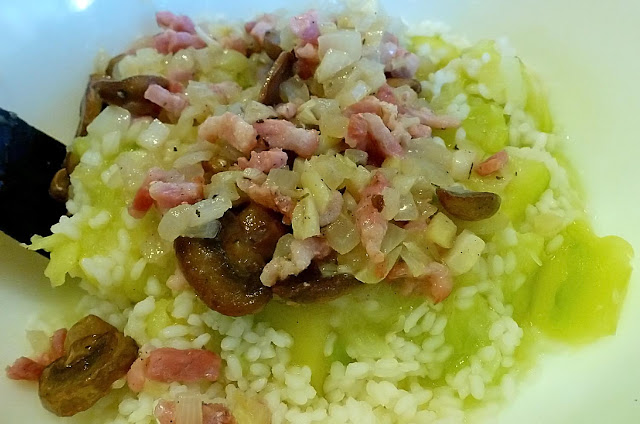 While the zucchini is cooking, sweat some onions and garlic in a skillet until the onion is translucent and has softened slightly. Mix the onion and garlic into the roughly mashed zucchini and cooked rice. Add any other flavor ingredients you want. I put in some smoked pork lardons, a good pinch of dried thyme, and about half a cup of corn kernels, and a few cooked, sliced mushrooms. Don't spare the salt and pepper, of course. 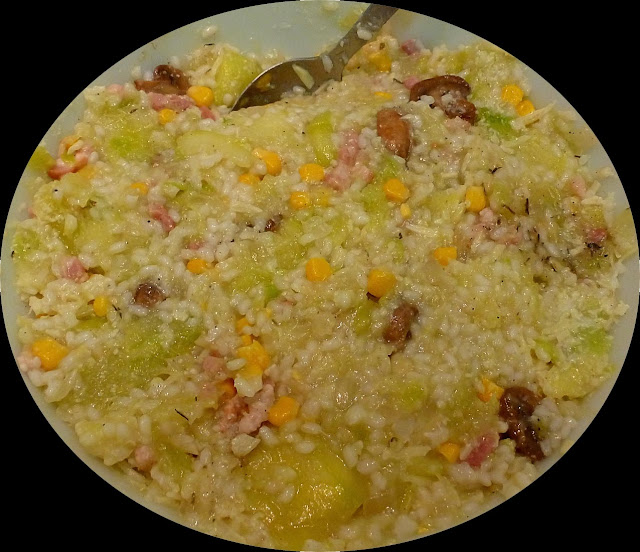 When all the ingredients have cooled, add some grated cheese to the mixture. Some mozzarella, for example, with some grated parmesan is good, or cheddar or "Swiss" cheese. Then beat three eggs in a separate bowl, add a little milk or cream, and pour the liquid mixture over the vegetables. Stir everything to mix well. 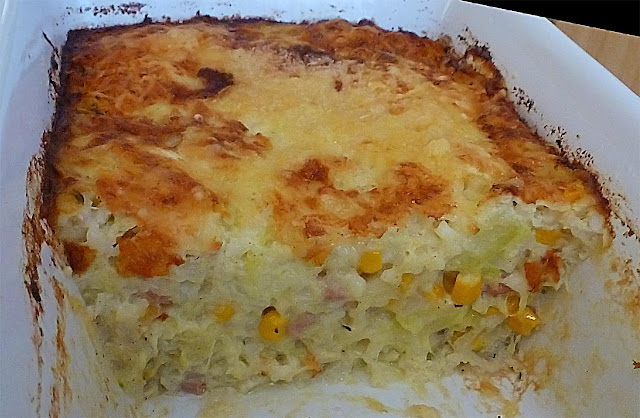 Pour the zucchini-egg mixture into a buttered or oiled baking dish. As you can see, I used a big terrine (a loaf pan) because I wanted the gratin to be fairly thick, not just a thin layer like a quiche. You could make it either way. Put a little more grated cheese on top. Bake it at 350ºF (180ºC) in the oven, turning the temperature down as it starts to brown so that it won't burn. It needs to cook for 30 to 40 minutes. It has a pudding-like texture.