For anglophones, pneumatique is a funny word in French. The funny thing about it is that it's pronounced [pnømatik]. In other words, you have to pronounce the initial P, the same way to do with a French word like psychologie [psikɔlɔʒi]. The short, everyday form of the term, meaning "tire" as on your car or your bicycle, is the one-syllable word pneu, pronounced [pnø]. At least the correct pronunciation of the word is as a single syllable, but I do hear people here say something like puh-neu, in two syllables. Pneu and pneumatique are masculin-gender words in French, and I've learned this morning that they are short forms of the technical term bandage pneumatique, the rubber, air-filled "wrapper" around a car or bicycle wheel.

I won't go into the details of the phonetic transcriptions in the first paragraph — I copied them out of the CNRTL on-line French dictionary. But I will say that the vowel represented by the symbol ø is the vowel of words like feu (fire), bleu (blue), jeu (game), eux (them), or deux (two). It's a very common vowel in French and we don't have any such vowel in English. To say it, you have to really round your lips (pucker up!) and touch your bottom front teeth with the tip of your tongue. Now you know more than you ever wanted to know. 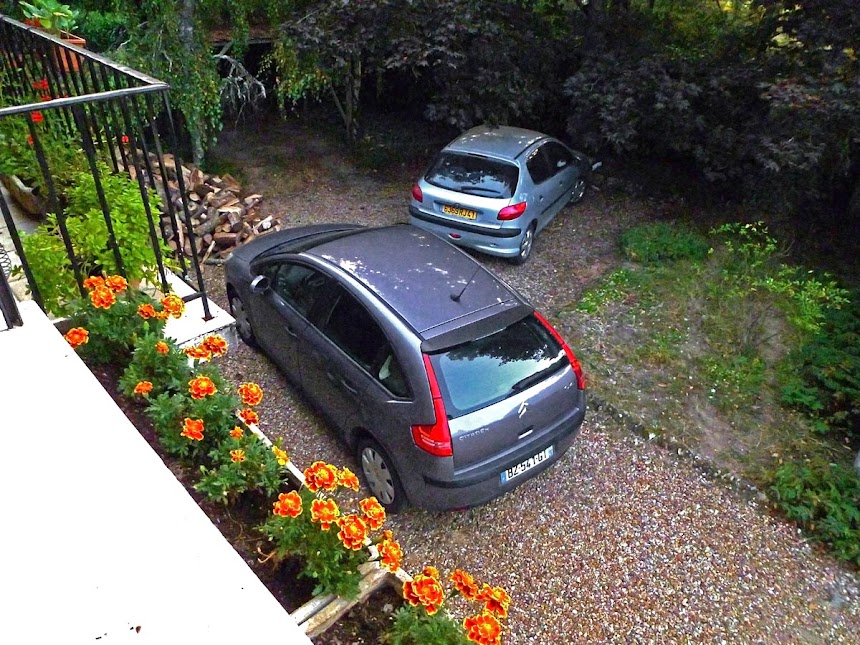 Why am I writing about this? It's because I'm getting new tires (you might spell it "tyre") on the old Peugeot today. I bought my Peugeot 206 as a used car (une voiture d'occasion) in August 2003, when we first came to live in the Saint-Aignan area. So I've had it for 15 years, longer than any other car I've ever owned. The Peugeot (there's that ø sound again — [pø'ʒo] is the way to say it) is the smaller blue car in the photo above; the other one is the newer, gray-colored Citroën C4). In 2003, the 206 had 65,000 kilometers — 40K miles — showing on its odometer (le compteur de kilomètres) and its tires were not new. Otherwise, it was in very good condition. I like it, and driving it, as much or more than any other car I've ever owned (a Ford, an Opel, a Renault 4L, two Subarus, and three VWs between 1971 and 2003, and now a Citroën C4).
The Peugeot doesn't get driven very much any more, however. It's the car we use for going to the supermarket or running other errands within 25 miles or so of Saint-Aignan (going to Romorantin, Blois, Loches, or Montrichard, for example). If I had realized how rotted the tires were, I wouldn't have been driving the car even that far from home. By the way, and à propos of nothing, in France we drive on the right side of the road as you do in the U.S., not on the left as they do in the U.K. Somebody asked me about that the other day.
The 206 now has 115,000 miles (185,000 km) on it. It's a year 2000 model — it's nearly 18 years old — and is (or was) a "luxury model" when new, with a powerful 2-liter diesel engine, automatic air-conditioning ("climate control"), fog lights, windshield wipers activated by a rain sensor, and airbags. It has a five-speed manual transmission and is a tiny car by U.S. standards. All that still works fine. The 206y gets close to 50 miles per gallon of diesel fuel so is very economical to run. And it's easy to park in small spaces.
Even so, yesterday I looked at my records to see how much the Peugeot 2016 has cost me in maintenance since I bought the Citroën in 2015. It comes to about 2,500 euros, or close to $3,000. Since there are two of us, it's nice to have two cars. We always had two cars back when we lived in Washington DC and then in California. Only for the first 12 years we lived here in Saint-Aignan did we manage with just one car, and it wasn't always easy. Since the Peugeot is not worth much now (maybe $3,000), I figure we might as well keep it. It would cost a lot to replace it with a newer vehicle.
Doing my research before buying new tires, I calculated how many miles or kilometers I've put on my current set of tires. I bought them in 2010. I was surprised to see that I've only driven the car 18,000 miles in those 7½ or 8 years. That's 30,000 kilometers. In California, I drove my VW an average of 20 to 25K miles per year for many years. I depended on it in my work life and I always had to keep it well-maintained because driving it was how I got to work in the morning and back home at night (100+ miles a day for much of my career).
The Peugeot's tires actually don't show obvious signs of wear and tear. They're Michelins and the tread is still deep, but the tires are rotting away from what we call "dry rot" but which is not really that. It's just old, sun-damaged rubber that is starting to crack and split. I've read that any tire that's more than six years old is "suspect" and needs to be inspected frequently. My Michelins are eight years old and I'll feel a lot safer riding on new tires.
I'm not getting new Michelin tires. It's just because they are expensive, and I drive the Peugeot so little that I don't see the point of paying their price. In six or seven years, if I can keep the Peugeot going that long, I'll just have to replace them anyway, for the same reason as now. So I'm going with a set of Firestones that my mechanic recommends and that are costing 230 euros, including balancing and mounting. Firestone in France is pronounced something like [fee-reh-stun]. I'm looking forward to seeing if the car drives differently with new tires on it.
Here's the definition of pneumatique that I found in the CNRTL on-line dictionary: Enveloppe de caoutchouc renforcée intérieurement par une carcasse de textile et de fils d'acier contenant de l'air sous pression soit directement soit dans une chambre à air qu'elle recouvre et s'adaptant sur la jante des roues de divers véhicules et appareils de locomotion de façon à assurer par son élasticité une bonne adhérence des roues sur la surface de roulement. Whew! A sentence worthy of Proust! I like the fact that what we call a tire's "inner tube" is called une chambre à air in French. I can't help thinking of Airbnb.
Posted by Ken Broadhurst at 07:15