After making sweet potato fritters a few days ago, I really wanted to make potato pancakes — paillassons de pommes de terre — using regular white potatoes. In my U.S. dialect, we used to call them Irish potatoes. I had a bag of them downstairs in the cellier that were begging to be cooked and eaten. 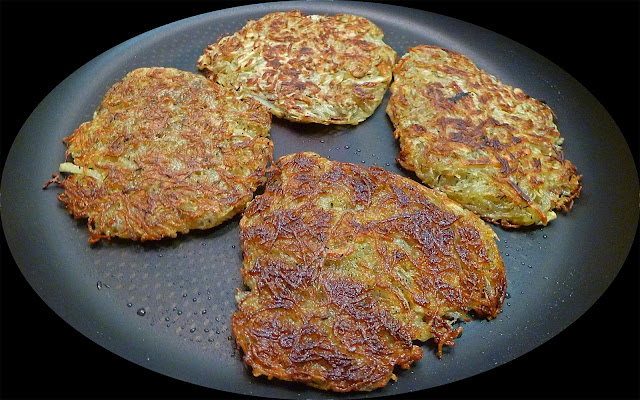 Make them as simply as possible, I was thinking, and see how it works. It was a success. I took three big pommes de terre weighing about 600 grams, peeled them, and cut them so they would fit through the chute of the food processor for grating. Walt did them, and he used the grater blade with small holes.


I put the grated potato in a big bowl and seasoned it with salt and pepper. For good measure, I added some dried thyme and some cayenne pepper, along with a sprinkling of allspice (piment de la Jamaïque). The salt, I think, made the grated potato release a lot of water, so I squeezed handfuls of potato over a colander in the sink to get it as dry as possible for frying. 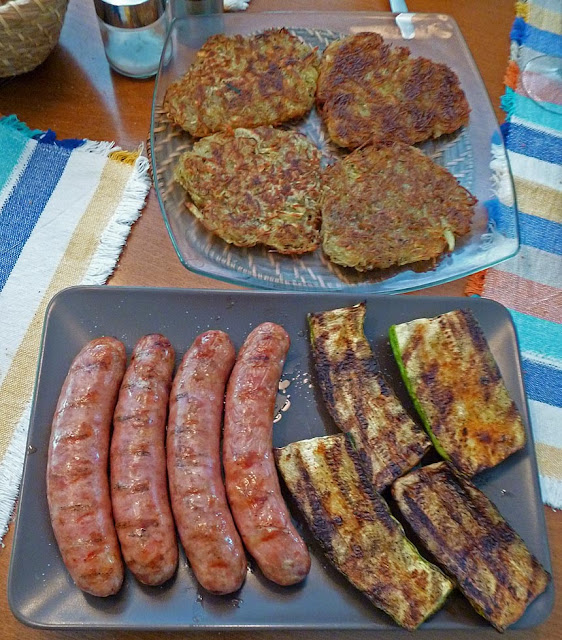 And then I added a couple of tablespoons of potato starch (it's like corn starch and called fécule de pommes de terre) which I thought would act as a binder to keep the paillassons from disintegrating in the pan. I think wheat flour would have the same effect.


It turned out that I had just enough grated potato to make four paillassons (in French that means "doormats" or, literally, "straw mats", by the way) and they would all four fit in our biggest non-stick skillet. They needed to be mashed down with a spatula so they were as thin as possible, and they just needed to cook for five or six minutes. They were crispy on the outside and slightly moelleux (tender) on the inside.

We ate the paillassons (also called "latkes" in America) with grilled "Toulouse" pork sausages and grilled zucchini, with some yogurt-sriracha sauce.
Posted by Ken Broadhurst at 06:30