Living in your car. Or at least feeling like it.

I'm not sure I would have ever thought that I'd own both a Citroën and a Peugeot. Or that I'd own two automobiles myself. And that one of them would be nearly 15 years old. And still running fine. 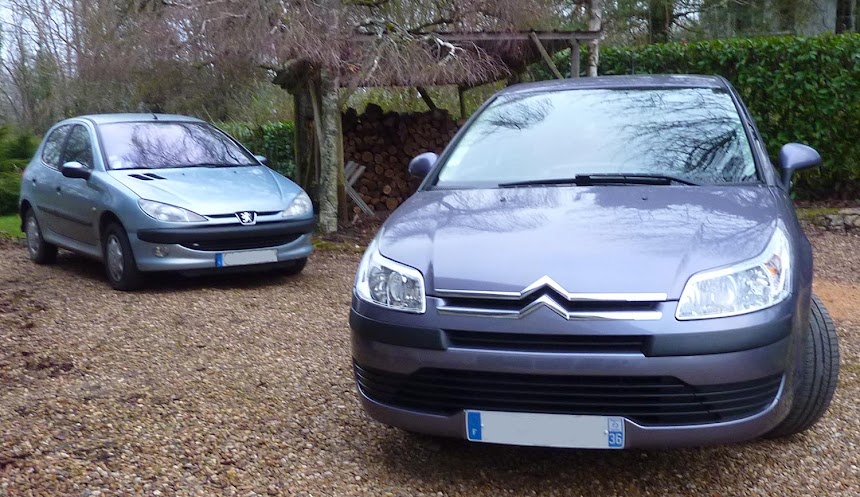 In my U.S. days, it was easy for me to drive my car 20 or even 25 thousand miles every year. That's 30 or 40 thousand kilometers. Early on, I left North Carolina and moved to Illinois. I was 22 years old. First I had an old Ford (a 1966 model) that I hated. I sold that and moved to France, where I didn't have a car. Then when I returned to the U.S.in 1973, I went to North Carolina and bought myself a brand new Opel Ascona. A sedan. Four doors. No air conditioning, no electric windows. An AM radio though! It cost me the royal sum of 3,250 dollars. (Not a typo.)

I needed a car because I drove back and forth from near Chicago to the N.C. coast several times a year. That's a distance of about 900 miles (1500 kilometers), each way. Nine hundred miles! One time I drove it without stopping, passing through the mountains of West Virginia in the middle of the night, on winding roads because the interstate highway through W. Va. was still under construction. That trip took me 23 sleepless hours.

I would also drive to Washington, D.C., the U.S. capital city, every year and sometimes twice. That took 15 hours on four-lane, limited access interstate highways. Each way. You can see how easy it was to rack up the miles on a car.

Later, when Walt and I lived in Washington ourselves, we both had cars. Subarus. We thought nothing of jumping in the car on a weekend and driving hundreds to miles to see places like Piedmont North Carolina or the Outer Banks. We went to Monticello, in Virginia, Asateague and Chincoteague Islands, and Harper's Ferry in West Virginia. We were learning about the history of the United States by going to the historic sites. We also drove to Philadelphia, New York, and even all the way to Québec in Canada, and farther north to Chicoutimi and the Lac St-Jean area. My Subaru was new then, and I walked to work in DC every day. Walt and I both grew up in towns located 350 miles from DC. Walt north and me south. We would jump in our cars and make those seven hour drives without thinking too much about it. It was fun.

In 1986 we drove across the whole North American continent, from Washington DC to San Francisco — twice. Once in a Subaru and once in a truck that we rented to transport the few sticks of furniture we owned back then, because we had upped stakes and headed west for a new life. That's a 3 thousand mile trip. Five thousand kilometers. Five days on the road. It was pretty exciting, both times.

Then there were the California years. Commuting. For a few years we lived in downtown San Francisco and I worked there too. People would say to me: "Don't you want to live farther out, where you could have a house and a yard? More space? Less noise? How can you stand the congestion and hustle of the city?" I told them I would rather not to have to drive many miles and hours from an outlying area into SF every day for work. In traffic and over bridges. No, I'd rather keep driving as a hobby. A weekend treat.

When you don't have to drive in traffic every day, it's fun to take the car out for a long drive on weekends, and see things. As we'd done in DC. In California, we'd go on camping trips up in the mountains or on the beautiful California coast. Once we spent a week driving to Seattle and Vancouver, a round trip of 2 thousand miles. Just for fun. We'd frequently go up to Napa Valley to taste and buy wine, and have a nice lunch. Later, we'd often drive the 9 hours down to the desert of Southern California a time or two a year, to see CHM, who had a house down there. And 9 hours back.

In 1989, I got a new job, and I had to commute. I tried commuting by train, but it was a real slog. I'd leave my car in a parking lot at the train station in SF and ride a bouncy, swaying train for an hour to get to Silicon Valley. Then I'd have to ride a bus from the station down there to my office. That worked for a while, but then my company moved its offices farther away from any train station and the 90-minute trip by train and bus became a 2½ hour ordeal. I gave up. Driving was my only choice.

At the end, I was driving 52 miles (80 kilometers) in traffic jams every morning to Silicon Valley, and of course the same distance in traffic jams back to SF in the evening. That meant I was spending 2 to 4 hours a day in my car, plus 9 or 10 hours a day at the office. After a decade of that kind of commuting insanity, I was a wreck. I threw in the towel at age 53. And moved to France. Now I drive about 5 thousand kilometers a year. That's 3 thousand miles. Per month, 250 miles. Actually, even that sounds like a lot to me. But compared to the 2,000 miles a month I drove for so many years, it's pretty relaxing.
Posted by Ken Broadhurst at 08:00