Yesterday was a beautiful day, one worthy of early spring. Problem was, I didn't feel the greatest. I woke up groggy. I felt a chill, and I wondered if I was coming down with something. It turns out I don't think I was, because I felt better in the evening and seem fine this morning.

I spent yesterday morning in the kitchen. I got involved in cooking a big crinkly Savoy cabbage that I had bought at the supermarket for one euro a couple of days earlier. Maybe it was eating cabbage that made me start feeling a little better.

I didn't want to cook the cabbage in a big pot of water or broth as soup. I looked around on the web and I happened upon a recipe called « Poulet au chou vert frisé » — chicken with Savoy cabbage. I had also picked up a chicken at the supermarket the day I bought the cabbage. 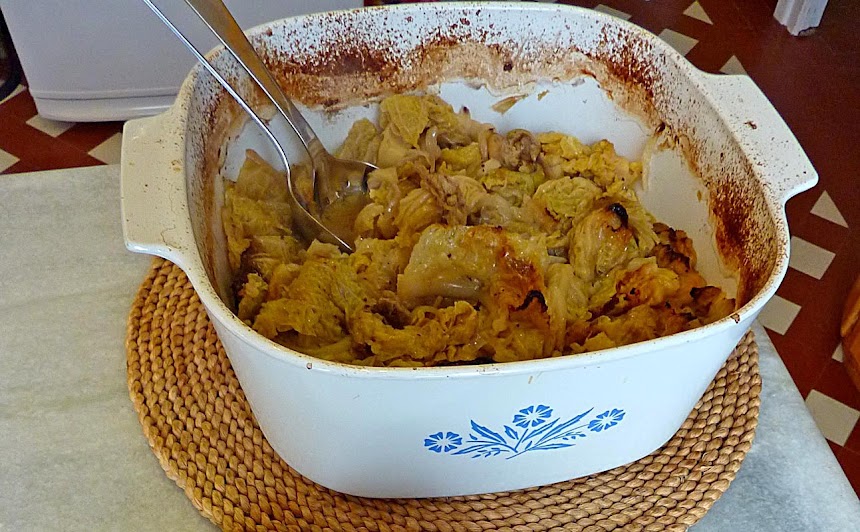 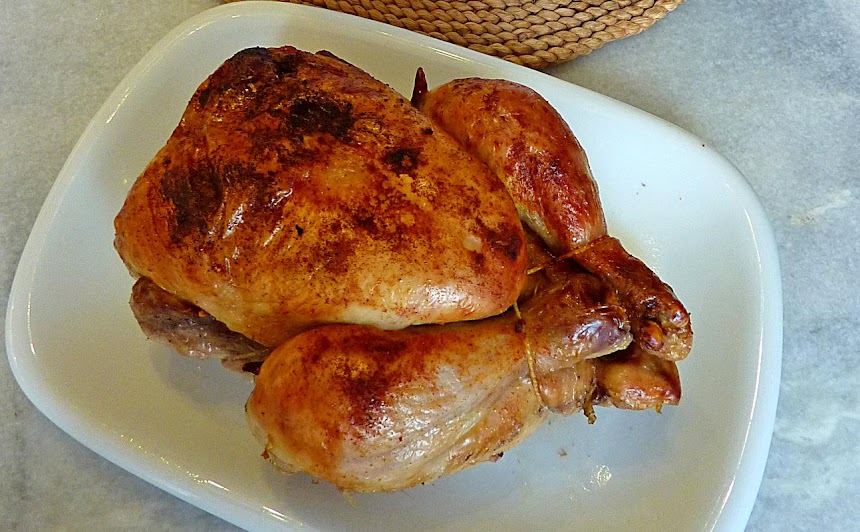 The recipe calls for blanching the coarsely chopped up cabbage for five minutes in boiling water before cooking it. French recipes often call for blanching vegetables and then cooking them in fresh liquid. I think it makes the vegetables sweeter. That's what I did. I also sauteed three small chopped onions in butter. (I saved a good dozen of the sturdy outer leaves of the cabbage for making stuffed roulades later this week. I blanched them too, while I was at it.)

The cut up cabbage cooked for about 45 minutes with a cup of broth and the buttery onions, seasoned with salt, pepper, ground allspice, bay leaves, and a pinch of ground cloves. When it was mostly done and getting tender, I set the raw chicken, seasoned with some smoked paprika, cayenne pepper, and more salt and pepper, on the bed of cabbage and onions. That all cooked, covered, for 45 minutes more in the oven.

Then I took the lid off the baking dish, turned up the heat, and let the chicken brown for 15 or 20 minutes. That was enough time for a good bit of the cooking liquid in the dish to evaporate. The result was tender cabbage and crispy, succulent chicken. The recipe said to serve the chicken and cabbage with some warm cream, but I left that part off for yesterday. We just had cabbage, chicken, and good fresh bread from the local baker.

While I was blanching and cooking the cabbage, Walt went out to do some chores in the yard. When he came back in, he looked at me and said that it sure smelled like cabbage in the house. "And it smells really good," he said. Luckily, we both like cabbage and find the aroma of it cooking to be appetizing.
Posted by Ken Broadhurst at 07:30